Together with the amount of attacks and provocations, there is a slight decrease in the intensity and duration of the attacks.

“Militants decreased the number of armed provocations and attacks along the entire frontline almost in three times – from 42 attacks on December 12 to 15 attacks yesterday,” informed spokesman of the Ministry of Defense on ATO related issues Colonel Andriy Lysenko at a press briefing at Ukraine Crisis Media Center. The majority of provocations were accompanied by firing from the prohibited by the Minsk agreements mortar launchers and artillery. 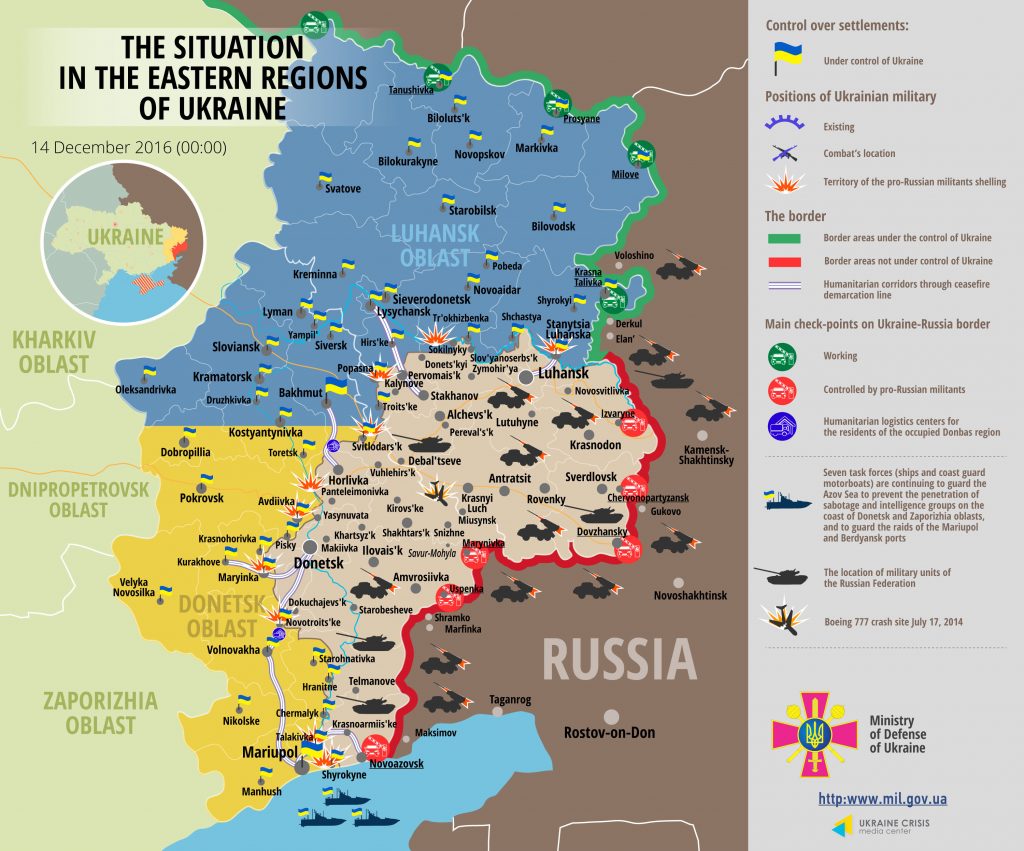 Militants used 82 mm and 120 mm mortar launchers near Krymske and Novooleksandrivka in the Luhansk sector. Insurgents launched 14 mortar shells in the area. “Russian proxies violated the armistice near Stanytsia Luhanska once again, opening fire from light arms which is a blunt violation of agreements on disengagement of troops and equipment,” said Col. Lysenko.

The situation is restless in Avdiivka and Luhanske settlement in the Donetsk sector, where intense mortar attacks took place. Militants launched 83 mortar shells in the sector within seven hours. A private house burned down as a result of militants’ mortar attacks at Avdiivka. There were no human casualties. “Moreover, hostile sniper was active in the vicinity of Luhanske, and near Verkhniotoretske militants instigated a provocation using a grenade launcher,” added Col. Lysenko.

Number and intensity of attacks decreased considerably in the Mariupol sector. Nevertheless, militants’ artillery fire is still ongoing, in particular near Shyrokyne and Berdianske. Moreover, they used small weapons near Ukrainian positions in Mariinka and Talakivka, and four mortar shells were launched near Novotroitske during the hours of darkness.

Ukrainian Armed Forces incurred no losses in combat yesterday, while four troops were injured. “Moreover, about midnight one officer of the State Border Guard Service was lightly wounded in a militants’ shelling of Stanytsia Luhanska checkpoint. He was given medical assistance on site and his injuries are not life-threatening,” said the spokesman.

Report on the military developments as of December 13 is available here. Interactive data on the shelling: chronology shelling chart and the interactive map.