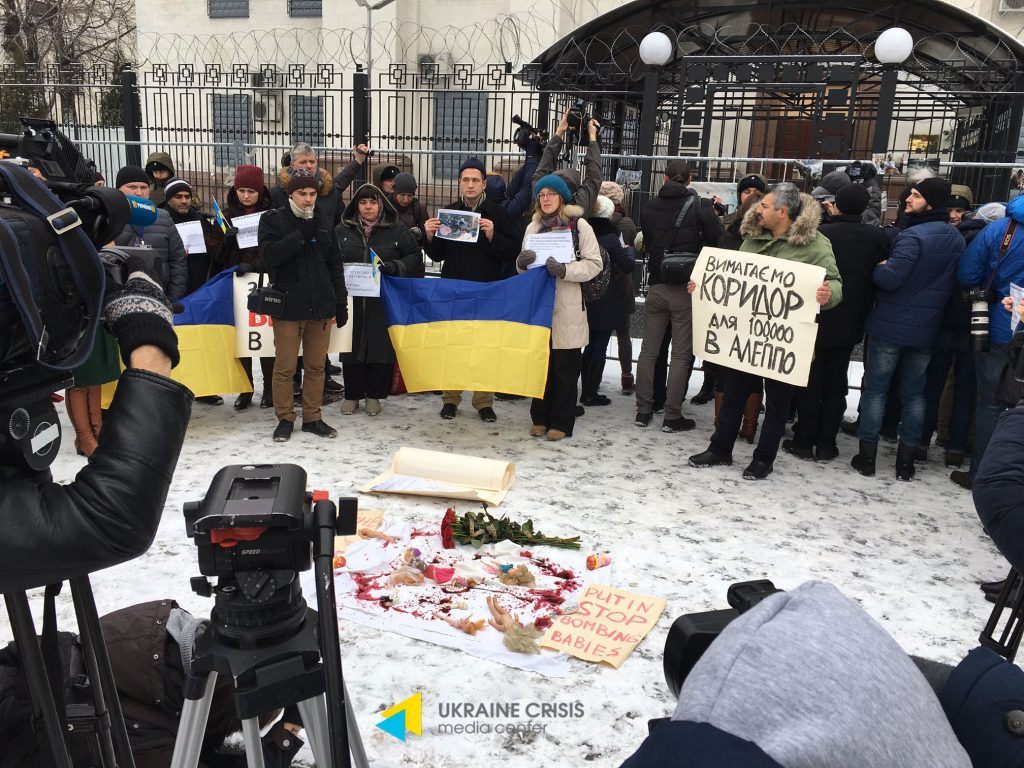 Ukrainians, as well as citizens of other European countries, watch the events in Aleppo in horror. “Russia deserves special sanctions because of the situation in Aleppo,” stated President of Ukraine Petro Poroshenko in a telephone conversation with President of the European Council Donald Tusk.

On December 12, a “farewell” messages from the people of Aleppo literally blew up the social networks. The Syrians hoped to attract attention of the international community to the events in the city, many recorded short videos and shared photos on the Internet, saying their hopes to survive the bombing were shrinking each passing hour.

On December 15, 2016 activists gathered for a protest against Russia’s actions in the Syrian city of Aleppo in front of the Russian Embassy in Kyiv. Dozens of people came to express their solidarity with the Syrian people and indignation at the actions of the Russian Federation, which supports the government army of current president Bashar al-Assad. At the protest UCMC tried to learn the requirements of Ukrainian protesters, and whether they were able to talk with the representatives of the Embassy.

About a hundred people gathered for a rally at the Russian Embassy at 10 a.m. The number of civilian casualties increased several times after Russia and its aviation entered the war. Therefore the protesters demand that Russia stopped bombing the civilian population in Aleppo, ban the use of weapons of mass destruction, form a green corridor for the inhabitants of Aleppo, and impose additional sanctions against Russia.

During the rally, activists hung photographs of brutal consequences of the bombing on the fence at the Embassy, and their broadsheets reminded of the previous wars unleashed by Russia in recent years – Chechnya, Georgia, and Ukraine. 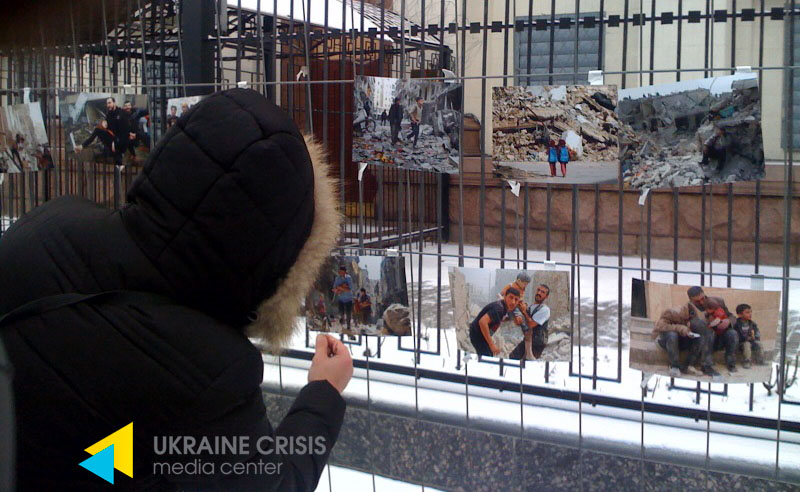 Similar events were held in other Ukrainian cities – Lviv and Kharkiv today.

“We could not stand aside when we saw all these horrible events are happening and we are ashamed that we have not organized such events before. We were busy with the problems in our country, but we see that Syria is just as much victim of international indifference as Ukraine is. We could not but support it. If everyone keeps silent and does nothing, nothing will change. We cannot help the Syrians by military means, but we can shape public opinion to put pressure on the politicians,” says Alia Shandra, project coordinator, Euromaidan Press, one of the event organizers. 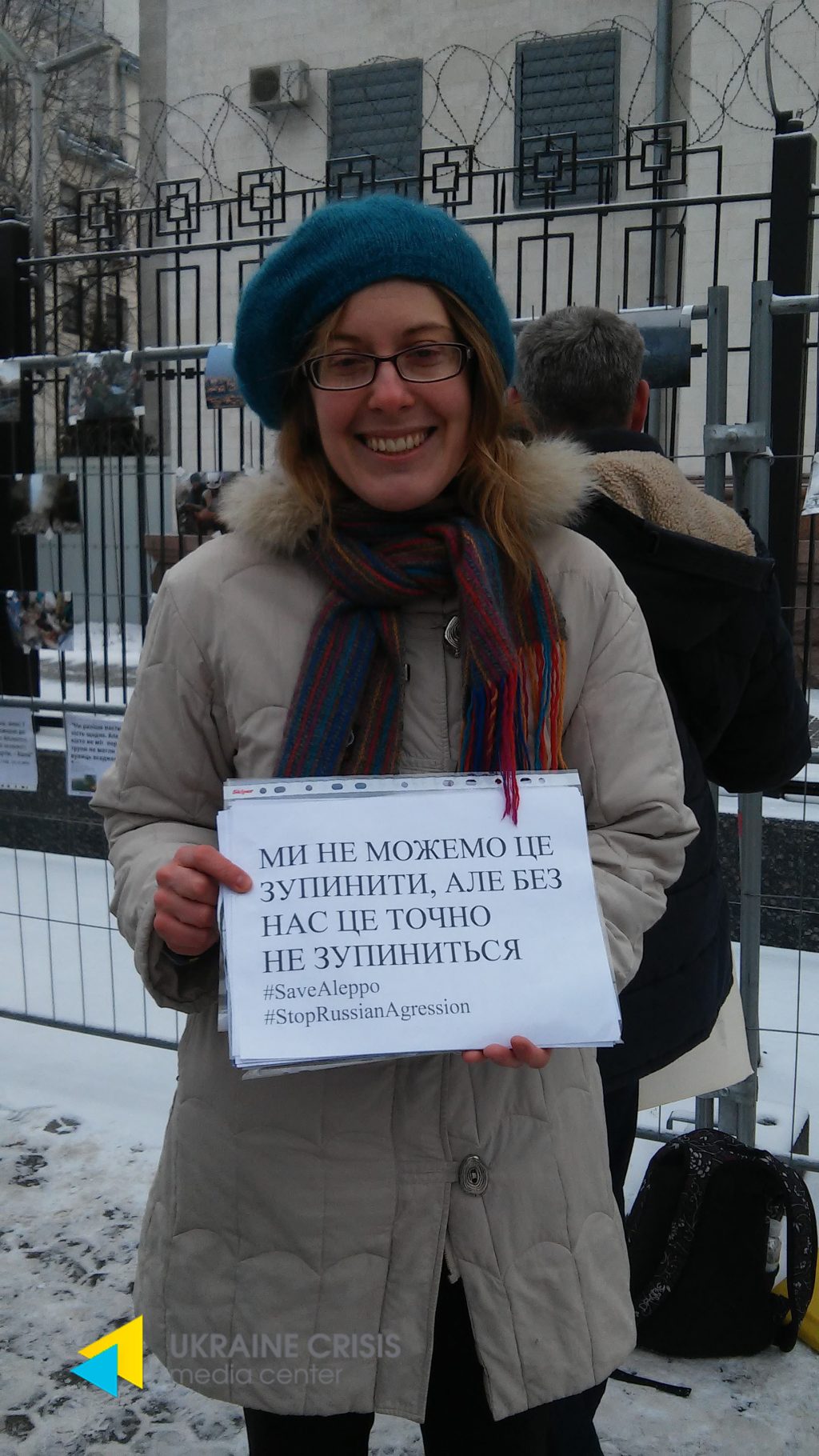 She is convinced that the Ukrainians, better than anyone else, understand the tragedy of the civilian population in Aleppo. “We know what happens when the “Russian World” comes to your house unexpectedly. But for Putin’s military, diplomatic and media support, Assad would not have held out so long. We can see that the Russian aggression is not just a Ukrainian problem, it is a worldwide problem, and only international solidarity and cooperation are able to overcome it,” she says.

“I would like to support the Syrians who are being killed, especially children. When you think about the fact that this situation might be also in Kyiv, you cannot remain indifferent,” says Ruslan Hutsul, participant of the action, entrepreneur. 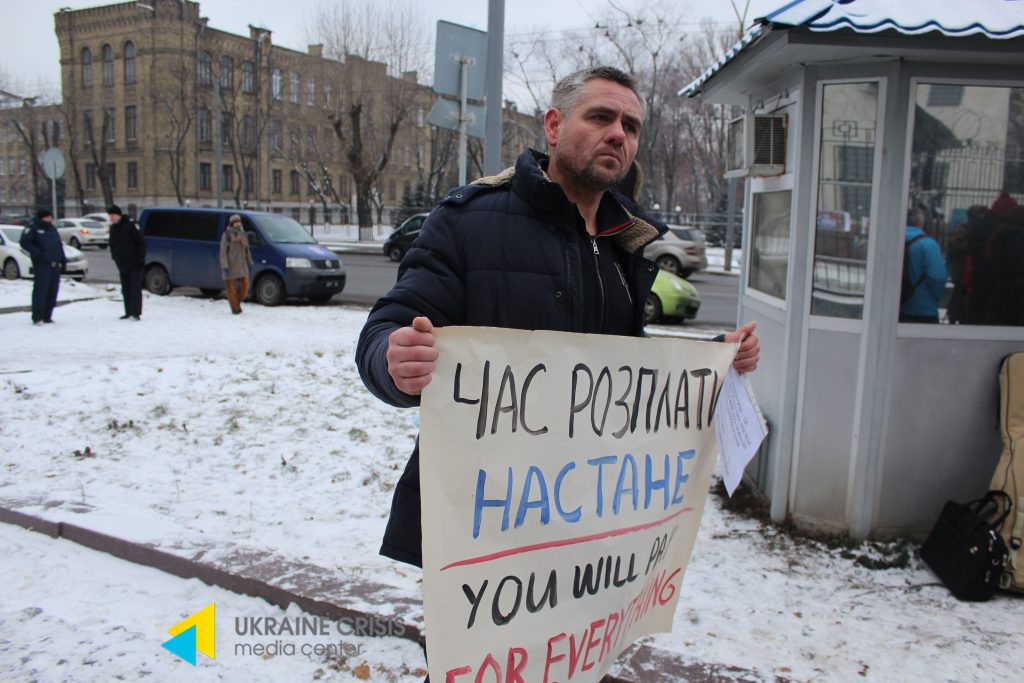 According to Ruslan, Ukraine can express only support, while the US and Germany should be determined, because it is within their power to stop the horrors taking place in Syria.

Just a few months ago Ukrainian activists and human rights advocates participated in the protests and petitioned for the release of political prisoner Ukrainian Gennady Afanasiev from the Russian prison. Today, Gennady personally has joined the rally at the Russian Embassy in Kyiv. He knows the value of solidarity all too well. 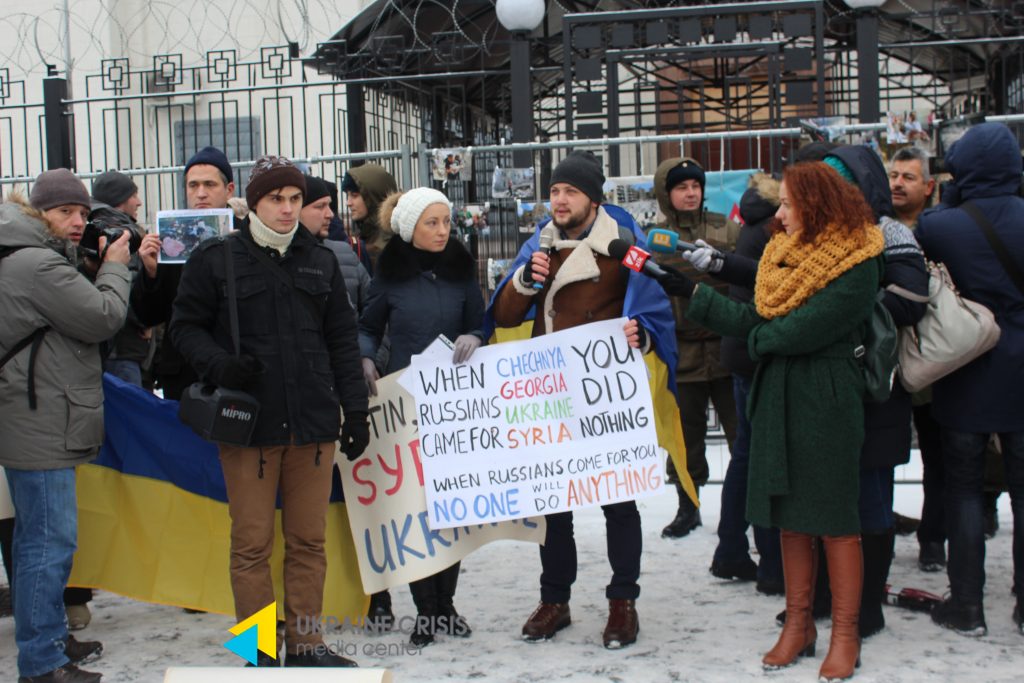 “It is not a bullet that kills men, it is indifference,” he says. “Today, we express solidarity. That is, we support the people who are dying now! We cannot remain silent any longer, after the events that took place in Georgia and Chechnya, after what is happening in Ukraine and Syria. When it was in Georgia, I personally did not respond and I am ashamed of it.” 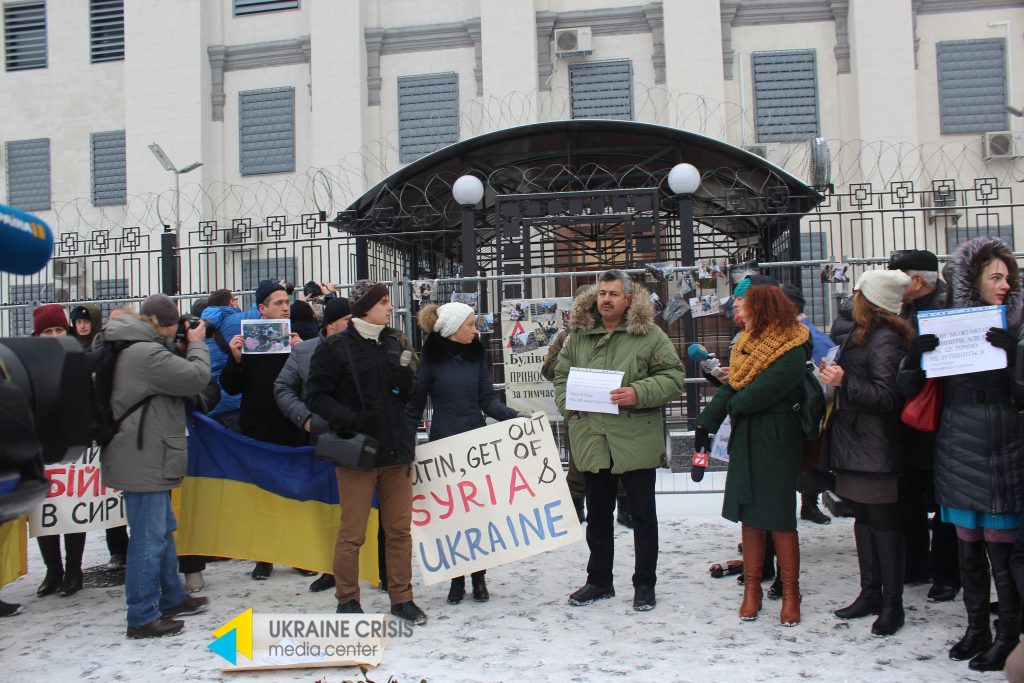 The rally was also attended by the Syrians, Chechens and people from other countries. Mohammed Zaidiya from the Syrian community, said: “I have come to say “No” to the Russian Federation policy in Syria. The Russian Federation should contribute to peace in Syria, and it can do this. But unfortunately, it is part of this conflict, and it has caused ruins and death of many people. What is happening today in Aleppo is scary, it’s impossible to express verbally how terrible it is. Negotiations on the organization of the corridor for the inhabitants of Aleppo are in progress. Russia, Turkey and Iran play a key role in organizing this process”. 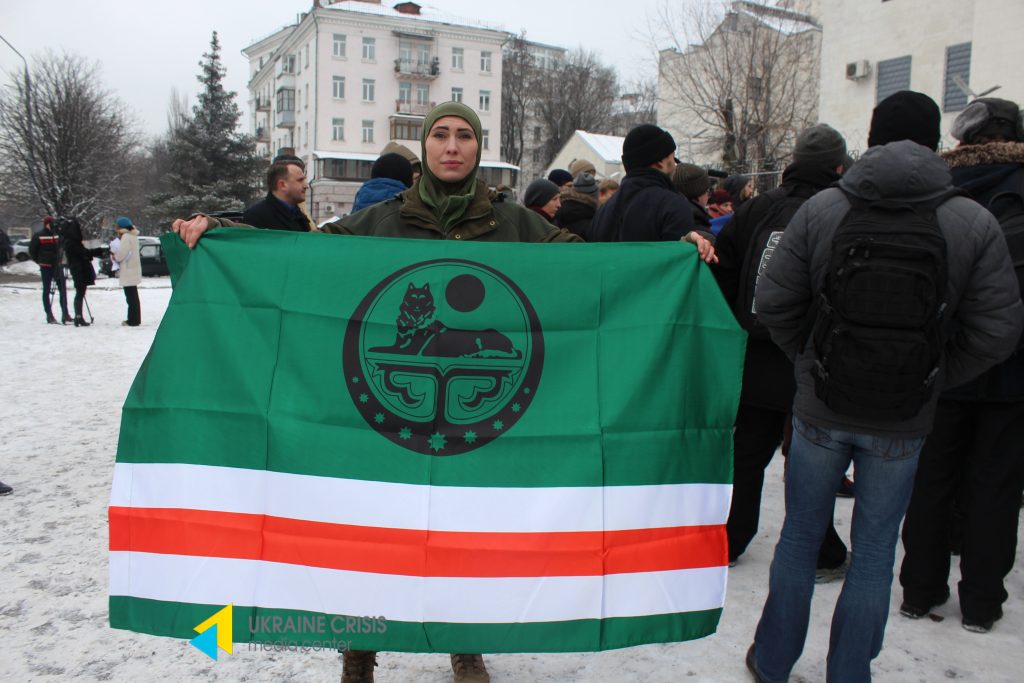 The Chechens who participate in the rally see in the Russian Federation activities in Syria of the same cruelty, cynicism and disregard for the civilian population, as they were in Chechnya. It is Russia that is the main culprit of the tragedy.

“In Chechnya, Russia did the same thing. They conducted bombardments that killed civilians, children, women and old people. As long as the international community is not aware of the danger from the state with imperial ambitions and does not give it a hard fight back, all this will go on. Political pressure on Russia is very important, the sanctions should be as severe as possible, without any possibility to remove them,” says Amina Okueva, Chechen volunteer. 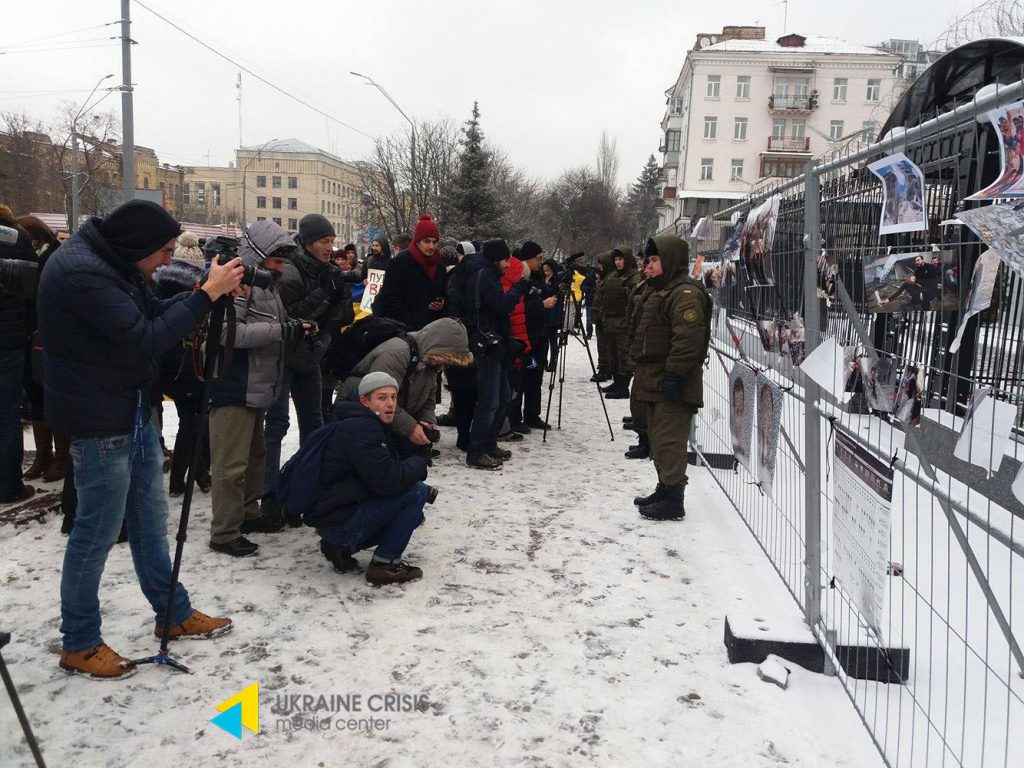 During the one-hour action, none of the representatives of the Russian Embassy did come to speak with the protesters. And this response demonstrates the attitude of the entire country to the war in Syria: they are indifferent to people’s death. While cynical attacks on Aleppo are continuing, Russia persists to stand its ground and prevent others to act in this situation: in the person of their representative to the UN Vitaly Churkin, it blocks any Security Council resolutions. Ukraine understands the feelings of the Syrian people. In a similar manner, Russia has been blocking all UN resolution on the situation in Donbas, where Ukrainian civilians and the military have been dying. Thus Syria’s voice cannot be ignored.