Ukrainian Armed Forces incurred no casualties in combat yesterday, said the spokesman of the Ministry of Defense of Ukraine on ATO related issues Colonel Oleksandr Motuzyanyk at a press briefing at Ukraine Crisis Media Center.
Militants made 10 attacks in the Luhansk sector yesterday, and one of them involved use of heavy arms. Main hostilities took place in Stanytsia Luhanska. Russia – backed militants violated the armistice in Lobacheve and near Popasna. 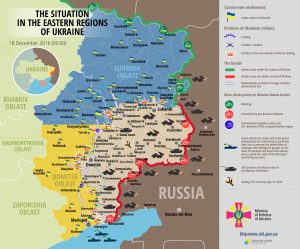 Russia-backed militants launched 12 mortar shells at Ukrainian troops positions in Troitske. Five militants’ attacks took place in the Donetsk sector, and three of them involved use of heavy weapons. The day started with intense militants’ artillery shelling in Nevelske. Firefights between Ukrainian troops and Russia-backed militants took place in Luhanske, Maiorsk and Avdiivka. Militants used mortars in Luhanske and Avdiivka, launching over 100 mortar shells at Ukrainian positions. “25 hostile attacks took place in the Mariupol sector, and eight of them involved use of heavy armor. A series of intense hostile attacks involving use of mortar launchers and cannons took place
in Krasnohorivka and near the seaside area between 1 and 2, 7 and 8 p.m. Adversaries violated the ceasefire in Starohnativka and near the seaside area, but used almost no heavy arms. Pavlopil and Talakivka were the main flashpoints,” informed the spokesman.
Ukrainian troops registered two flights of militants’ unmanned aerial vehicles yesterday.