Flashpoint in the Donetsk sector – Avdiivka, in the Luhansk sector – Popasna, in the Mariupol sector amount of attacks drops but the intensity of the attacks is still high.

The situation in the zone of military action in East Ukraine remains tense. Militants continue active hostilities at the Svitlodarsk bulge where they made a number of artillery and mortar attacks from the very morning till afternoon and attempted an assault which was defeated by Ukrainian troops. Two Ukrainian soldiers died in combat yesterday, four were injured and four more sustained blast injury. Moreover, the information on one serviceman taken captive on December 18 during the fight at the Svitlodarsk bulge has been confirmed, said spokesman of the Ministry of Defense on ATO related issues Colonel Andriy Lysenko at a press briefing at Ukraine Crisis Media Center. “After their failed attack, the enemy somewhat cooled down and instigated five armed provocations till the end of the day, using various grenade launchers. Our troops responded with fire from weapons authorized by the Minsk agreements to the most intense attacks,” he added. 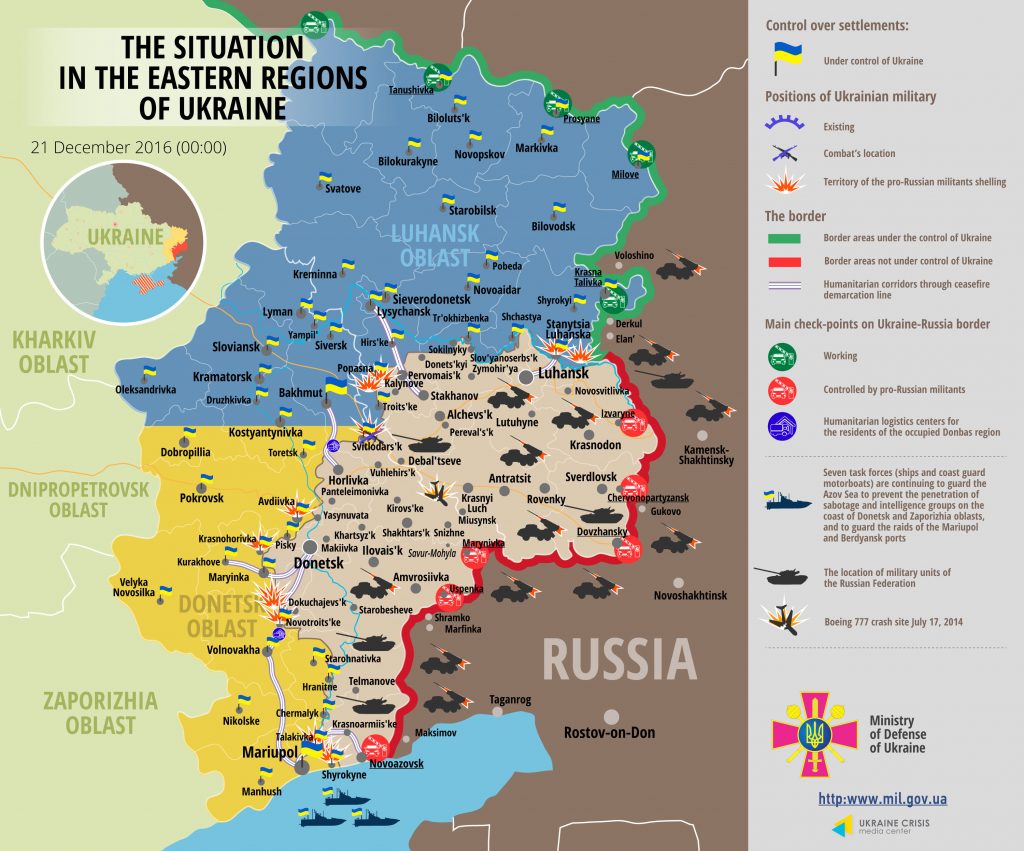 Col. Lysenko informed that Avdiivka remains another flashpoint in the Donetsk sector. Russia-backed militants are using both light weapons and mortar launchers in Avdiivka industrial area. Hostilities in the Luhansk sector moved towards Popasna yet another time. “Enemy widely used light weapons, including sniping weapons, in this frontline area during the day. Russian proxies opened mortar fire in Popasna district late at night,” he elaborated. Moreover, two militants’ armed provocations took place in Stanytsia Luhanska and Syze village in the close vicinity to Ukrainian-Russian border.

Report on the military developments as of December 20 is available here. Interactive data on the shelling: chronology shelling chart and the interactive map.