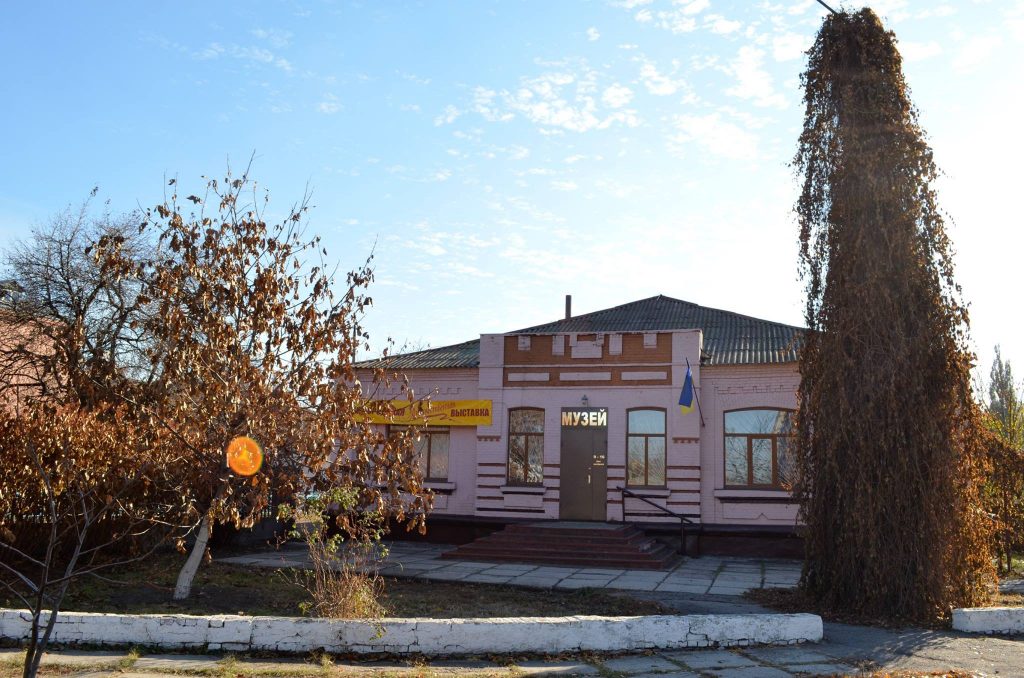 “We have a large-scale cultural hunger,” says Yevheniya Kalugina, curator of Slovyansk Local History Museum. “I really want the younger generation of the city to be interested in visiting the museum.” In search of new approaches, the museum wanted to change the 1917 exhibition in order to show that Ukraine was fighting for its independence 100 years ago. Young people, unfortunately, have a vague idea of this period in the national history.

Founded in the 17th century, Slovyansk almost immediately became the center of salt production and trade. Later, a resort was created on the salt lakes near the city. With the abolition of serfdom, the area began to attract foreign investment, most of which were Belgian, French and English. They gave such strong boost to the industrialization in the region that Donetsk region got an informal name of the 10th Belgian province in the late 19th century. 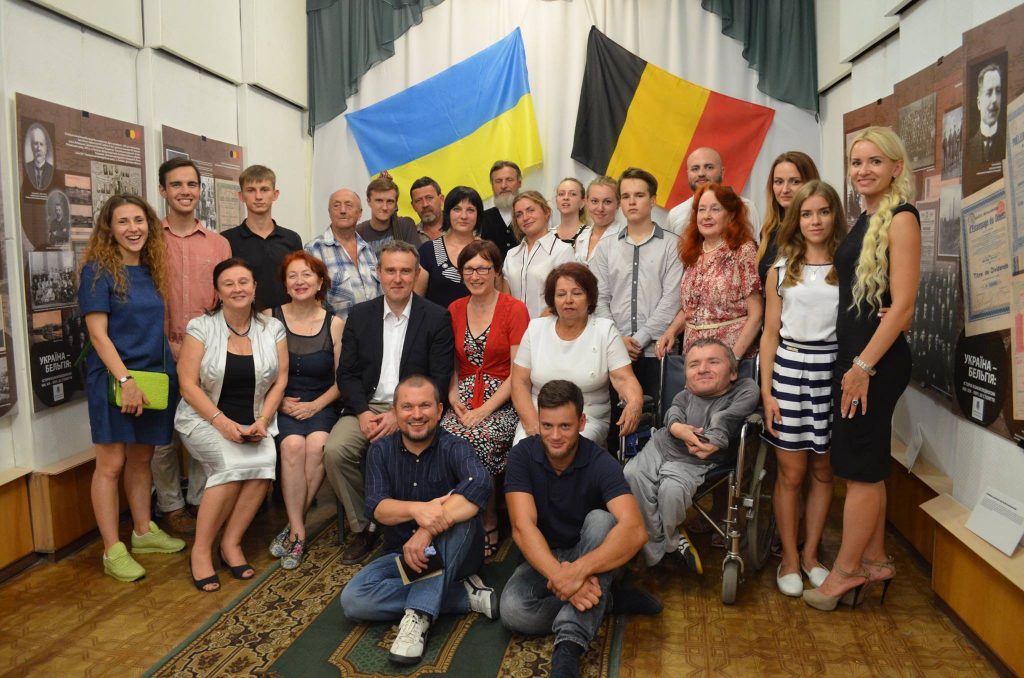 The Soviet Union picks up and enhances industrialization; the city becomes a leading center of not only salt but also clay production. But it’s all in the past: today Slovyansk has acquired a different reputation. In 2014 it was the first city where separatism broke out. A few months after the occupation, the city was released by the Ukrainian military. Ukrainians often have a negative association with this Ukrainian city even today. But the city lives, develops and seeks to find historical truth in the region.

The idea of cooperation between Slovyansk Local History Museum and Arts Department of Ukraine Crisis Media Center appeared almost a year ago, when UCMC began to study the development of museum management in Ukraine. Together, they finalized the idea and set a goal to transform the museum into a modern cultural center that will become a model for other regional museums in the interactive depiction of history, will encourage museum staff and artists to collaborate and review formats of their work. Oksana Barshynova, Head of the research department of the 20th -21st century art at the National Art Museum of Ukraine, also supports this idea of a new museum. She is sure that local history museums should show history and context that will affect everyone.

Activists want to dispel myths and discover hitherto little explored pages of the history of the region through this project. The project is implemented in two museums – Slovyansk and Lysychansk from November 2016 to March 2017 with the support of “Ukraine Confidence Building Initiative (UCBI)” of the United States Agency for International Development.

Master class “Ukrainian costume” and workshop “Original, Copy, Replica” were the first events within the project in Slovyansk.

At the master class “Ukrainian costume” experts from the Ukrainian Institute of Fashion Yuriy Melnychuk and Lyudmyla Svivtseva-Klymchuk dipped museum visitors in the history of 19th-20th century Ukraine through national costume. The costume reflects lifestyle and economic development of the area. “Clothes are a signifier, a passport of man’s origin. Before, every village was different due to clothes, but many artifacts were destroyed during the Holodomor in the 20th century. This resulted in a “sharovary complex” (sharovary – wide pants worn by fighters or kozaks, this became a very popular and only symbol of Ukrainian national costume – ed. note) an image devoid of genuine traditions. We feel a particularly acute need to restore the memory of the nation,” says Yuriy Melnychuk, deputy director of the Ukrainian Institute of Fashion.

Different cultures that inhabited the South and East of Ukraine have created a unique international mix that is still little explored. It is necessary to explore more than 100 villages for the whole picture, they say at the Ukrainian Institute of Fashion.

Traditional Ukrainian dress has many components. The components are common to the whole of Ukraine, only the phasing and style of putting on a costume are different. A properly assembled costume is an integral and real image that carries the historical truth, believes ethnographer Lyudmila Svivtseva-Klymchuk.

So, the first component to put on was a white long shirt of linen or hemp. Colorful embroidery was used as festive decoration. Then came the lower part of the suit – plakhta, a wrap or a skirt and an apron on top, a belt was to hold it all. Next – breast clothes – kyrset or yupka. Then people put on boots, laced shoes or sapyantsi. Particular attention was paid to headwear, because a woman was supposed to go with her head covered. Unmarried girls wore ribbons and flowers. A betrothed girl wore a wreath. The most richly decorated wreath was worn at the wedding. In winter, women wore headscarves. The final touch was jewelry: beads and metal ornaments worth an entire estate. 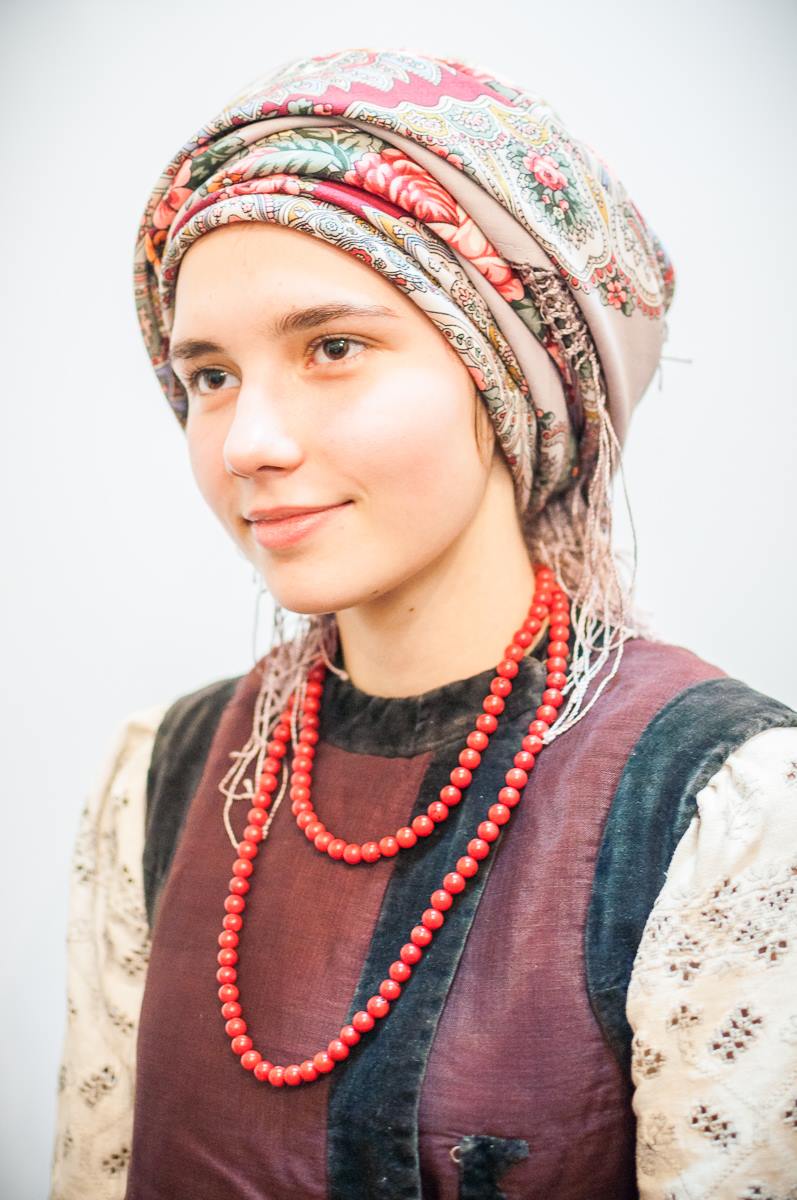 The second event under the project was the workshop “Original, Copy, Replica,” at which the Slovyansk Local History Museum presented the most valuable exhibit  – the 13th century bronze Aquarius (akvamanil), its copy and replica. The original was found accidentally, when people were digging the well in one of the yards. In 1981, it was given to the museum.

The composition of the figure includes a horse, girl and knight. Scientists suggest that the composition is based on the legend of Tristan and Isolde.

Throughout 800 years of the figure existence its head, sword and shield broke off. So, in the early 2000s, museum workers decided to make a copy, and later – a replica. The copy was very close to the original. It became a scientifically valuable exhibit. Now, along with the replica, it is exhibited in the Historical Museum in Svyatohirsk. The original is kept in Slovyansk, but it is not exhibited due to the lack of appropriate security conditions. 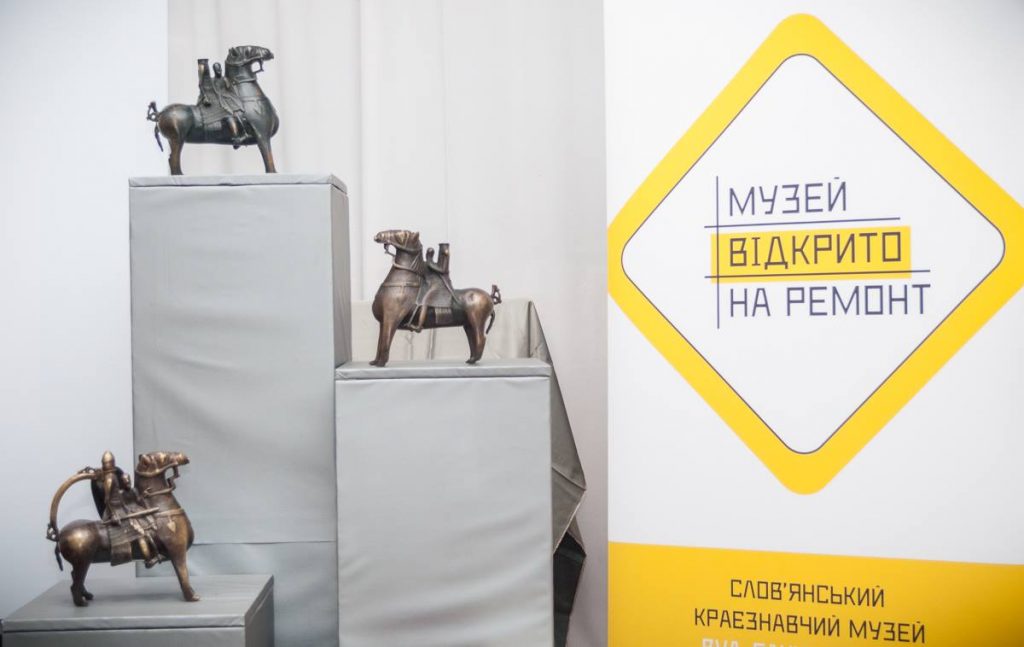 It is probable that the unique bronze akvamanil used for washing the hands had found its way here via the trade routes to Tmutarakan, suggests Anatoliy Shamrai, senior fellow of the museum. “That form of akvamanil  was popular in the 13th century in Lower Saxony. It is difficult to say exactly how it got here. Perhaps, it was stolen and buried, or brought by the peasants who moved this way.”

“Other materials were used to make the replica, and, unfortunately, the full reproduction in terms of metal thinness was not achieved,” informs Volodymyr Dedov, senior researcher, Svyatohirsk Historical and Architectural Reserve.

According to Leonid Maruschak, UCMC coordinator, the museum will be provided with the new equipment, which will stimulate research activities, contribute to the interactive presentations and to the opening of a museum laboratory. In the future it can be also used by all museum institutions of Donetsk region. For example, an artifact can be explored and the original can be distinguished from a copy with the use of the electron microscope.

For the present such events are attended by professional audience: historians and museum staff from the region, history teachers with their students. However, Liliya Zander, museum director, is sure that with the new research equipment and updated exhibitions, the museum will work in a new way and will attract a wider audience. In addition to the scheduled excursions, students will visit the museum for sheer pleasure. 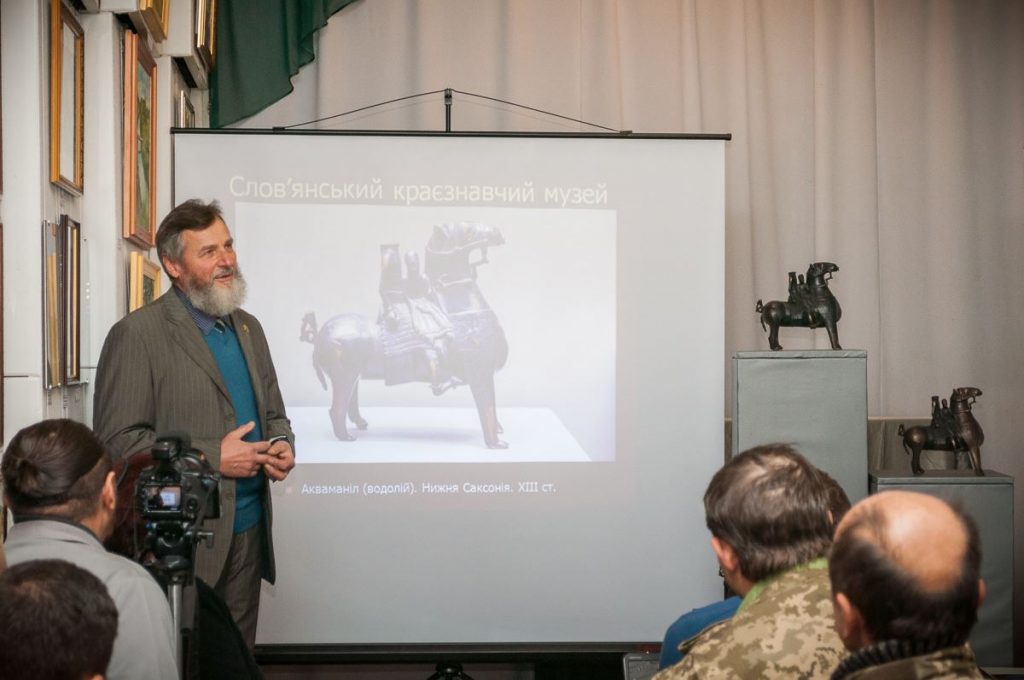 Slovyansk faces an unusual combination of the war and lively cultural space. Along with “cultural hunger,” a close proximity to active combat actions is felt here despite the 70 km distance to the contact line. An armed group of three or four strong fellows in uniforms with guns behind their backs meets passengers at the station. They did not stop the cultural mission from Kyiv, but just looked distrustfully at them. Many people are dressed in army camouflage. They drove to the Slovyansk museum in a spectacular white truck with a red inscription “+200”. The conversation with the young men revealed that they are “diggers” who care about the historical and cultural heritage of the region. In peacetime the guys help the museum in archaeological missions.

The war and culture are inalienable here. Promoting peace, we should remember why we need it. If we paraphrase the famous dictum of Winston Churchill, we will say: “If there is no culture, what are we fighting for?”

The struggle continues; there are still many innovative museum events, follow the news of “Museum open: Slovyansk” and “Museum open: Lysychansk” on facebook and vkontakte.