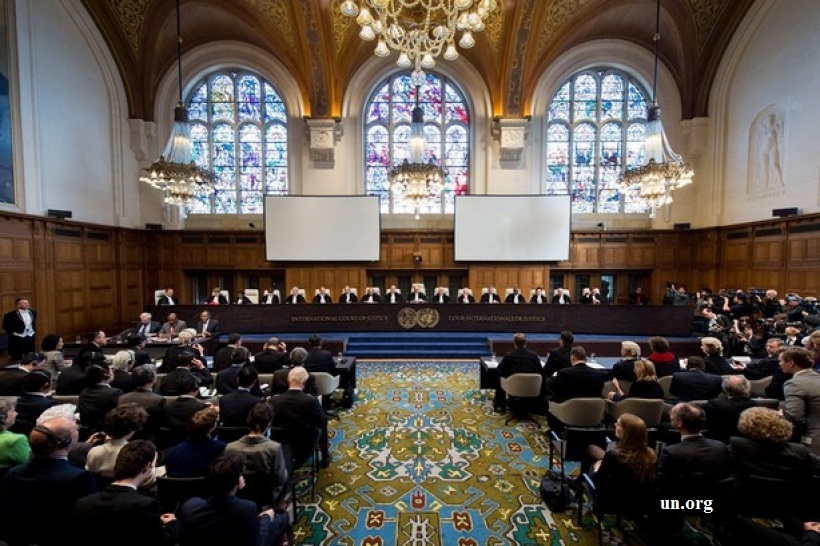 UCMC publishes a short version of the EJIL: Talk! story about the court.

Why Ukraine submitted the lawsuit?

In a much-anticipated move, on 17 January 2017 Ukraine submitted the lawsuit against Russia at the ICJ alleging the violations of the International Convention for the Suppression of the Financing of Terrorism (Terrorism Financing Convention) and the International Convention on the Elimination of All Forms of Racial Discrimination (CERD). (For more information about the court read here )

Russia does not recognize the compulsory jurisdiction of the ICJ. Given that both Ukraine and Russia are parties to the Terrorism Financing Convention and CERD, Ukraine invoked those two instruments as the basis for its action before the ICJ.

Therefore, Ukraine alleged the breach of CERD, claiming Russia’s denial of rights – accorded by CERD Convention – to non-Russian ethnic groups, such as the Crimean Tatar and ethnic Ukrainian communities in Crimea.

Ukrainian officials have earlier stated that they were building up the case against Russia by attempting to negotiate in good faith with Russia over the alleged violations of both conventions, which is the prerequisite for bringing the case before the ICJ.

Judging by Russia’s response to Ukraine’s lawsuit in the commentary posted by the Russian MFA, Russia clearly has a different perception of Ukraine’s negotiation attempts. It maintains that despite Russia’s “genuine” attempts to clarify the nature of Ukraine’s claims with respect to the alleged violations of the UN Terrorism Financing Convention, it encountered “persistent unwillingness of Ukrainian authorities to engage in the substantive dialogue”, which “ultimately ended with Ukraine’s unilateral withdrawal from consultations”. Russia also stated that Ukraine dismissed the prospect of settling the dispute through an independent arbitration tribunal and claimed that “Ukraine does not seek to settle the dispute, but rather attempts to find any excuse to bring the case before the ICJ”.

As to Ukraine’s claims on the violation of CERD, Russia maintained that it engaged in the dialogue with Ukraine in good faith, however, Ukraine “showed the lack of interest in the substantive discussion of the issues at dispute”. Russia submits that it suggested to Ukraine to compare Russian and Ukrainian legislation on racial discrimination “in order to find a common understanding of the best way to protect the people’s rights and substantively deal with each specific situation”. Russia also claimed that it encouraged Ukraine to review its practices with respect to the implementation of the Convention in Crimea “prior to its reunification with Russia”.

It also maintains that Ukraine ignored its questions regarding the rights of the Russian and Russian speaking population in Ukraine, which are not relevant to the current dispute.

Although negotiations were attempted, the parties do not seem to have communicated about the same issues which form basis for Ukraine’s action before the ICJ. The ICJ judges will have to evaluate whether negotiations within the meaning of both conventions indeed have taken place.

With respect to the violations of the Terrorism Financing Convention, Ukraine alleged that since 2014 Russia has escalated its interference in Ukrainian domestic affairs by “intervening militarily in Ukraine, financing acts of terrorism, and violating the human rights of millions of Ukraine’s citizens”. Ukraine submitted that by instigating and sustaining an armed insurrection in eastern Ukraine, Russia violated fundamental principles of international law enshrined in the Convention. In light of the on-going armed conflict in eastern Ukraine, which has been recognised by the ICRC, various international NGOs and more recently by the ICC Prosecutor as being governed by the rules of international humanitarian law, one cannot help but wonder whether the choice of the convention is the right one. Although the government of Ukraine treats rebels who are fighting in eastern Ukraine as “terrorists”, the international community has described the situation in Ukraine as “hybrid warfare” where an international armed conflict runs in parallel to a non-international armed conflict.

As the response to Ukraine’s claims with respect to the violation of the Convention, Russia maintains that Ukraine did not provide any information that was supportive of its allegations on the breach of the Convention. It also hinted that the situation in eastern Ukraine is governed by the rules of international humanitarian law, questioning Ukraine’s treatment of the DPR and the LPR representatives as “terrorists” in light of their earlier participation in the Minsk process with the view to resolve the dispute. The same objection on substantive law will be inevitably advanced by Russia in the ICJ.

Ukraine has better chances to succeed with its claims under CERD. With respect to the violations of CERD, Ukraine argued that after Russia seized Crimea by military force and attempted to legitimize its act of aggression through the illegal referendum, it created a climate of violence and intimidation against non-Russian speakers in Crimea that violates their rights under CERD.

However, the Court will not provide answers that Ukraine wants to hear on the use of force and the legality of Crimea’s unilateral cessation, as it is limited to the examination of claims that strictly fall within CERD. If Ukraine wants to get answers to those questions, it should consider lobbying for the initiation of advisory proceedings before the ICJ at the request of the UNGA.