The situation in the ATO area remains difficult. Militants used the entire scope of weapons except “Grad” MRLS. “The number of hostile ceasefire violations once again exceeded one hundred,” said the spokesman of the Ministry of Defense of Ukraine on ATO related issues Colonel Andriy Lysenko during a press briefing at Ukraine Crisis Media Center. 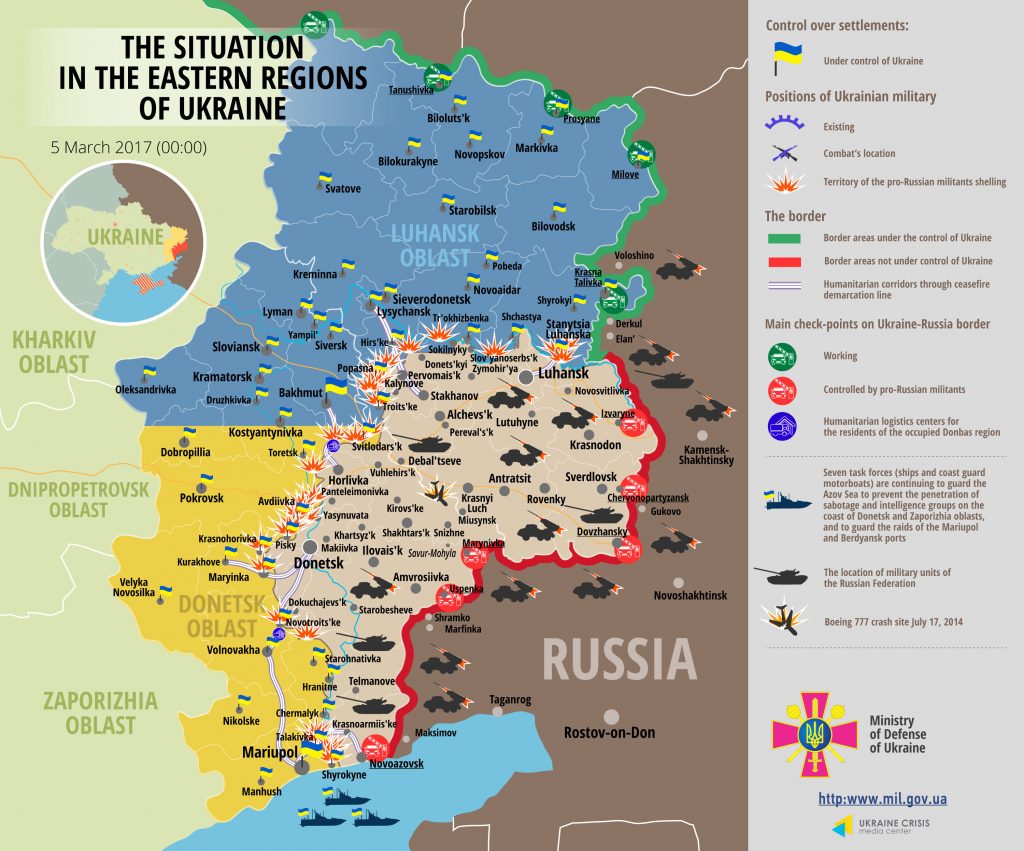 Militants violated the armistice in the Luhansk sector 42 times. Half of the attacks involved the use of heavy weapons. The biggest number of shooting attacks occurred in the Popasna district. “Main hostilities took place before noon and after the sunset there, when Russian proxies threw mortar and artillery fire at our strongholds. Militants sporadically shot from grenade launchers and small arms from noon till sunset in this area,” said Col. Lysenko. Russia-backed militants launched over 60 mortar shells at Ukrainian positions in Krymske during the day. They also used small arms. Militants opened fire from small arms, including sniper rifles, six times in Stanytsia Luhanska. Moreover, they violated the armistice twice near Shchastia, in Lobacheve.

Militants violated the ceasefire 26 times in the Donetsk sector, using heavy weapons 17 times. Hostilities in Avdiivka and the outskirts started around 6 a.m. Militants were shooting from tanks and mortars for two and a half hours. Following this, the armistice held till 4 p.m., and then the attacks resumed and continued till midnight. “Militants used the entire arsenal to attack Avdiivka defenders, except for artillery,” said Col. Lysenko. Moreover, four attacks took place in the vicinity of Donetsk airport: two in Pisky and two in Opytne. The second attack involved the use of mortar launchers in both cases.

Militants conducted 42 attacks in the Mariupol sector, and 12 of them involved the use of heavy weapons. Hostilities became more active near Dokuchaevsk. “Russian proxies delivered huge artillery and mortar attack at Novotroitske after midnight, launching 20 projectiles and 30 mortar shells. The enemy attacked Ukrainian positions near Dokuchaevsk with mortars and APC weapons. Activity of one hostile sniper was registered in the same area,” said the spokesman. Militants shelled Ukrainian positions from mortars two times – in Mariinka and Krasnohorivka. They also used small arms, and a sniper was recorded in Mariinka in the afternoon. Moreover, militants conducted one mortar attack in Bohdanivka. 15 artillery shells were launched at Ukrainian positions in Novohryhorivka. Attacks occurred non-stop in Pavlopil-Shyrokyne frontline area. “Defenders of Vodiane were affected the most, as adversaries fired about 30 artillery projectiles and over 80 mortar shells yesterday,” said Col. Lysenko.

“One Ukrainian serviceman was killed in combat yesterday, and 12 more were wounded and sustained injuries,” informed Col. Lysenko.

The spokesman added that roof of one private house in Mariinka was ruined in militants’ shelling of Mariinka and Novomykhailivka which occurred in the evening of March 3. Walls and windows of a building in Novomykhailivka were damaged and one vehicle burned. Moreover, a woman from Mariinka sought medical aid. She was injured in militants’ shelling on March 1.