There were no fatal casualties among Ukrainian troops in the ATO area yesterday. Nevertheless, three civilians were wounded in the frontline in the Donetsk sector. Volunteers from Zhytomyr region Yulia Tolmachova and Serhii Adamiak were wounded on the northern outskirts of Horlivka. They were given timely professional medical aid in Bakhmut hospital and later evacuated to Dnipro. It is around the temporarily occupied Horlivka that militants shelled the Ukrainian Armed Forces’ positions the most, said the spokesman of the Ministry of Defense on ATO related issues Colonel Oleksandr Motuzyanyk during a press briefing at Ukraine Crisis Media Center. Militants launched 30 mortar shells at Maiorsk and 100 at Novhorodske.  Moreover, Russian proxies were actively using grenade launchers,  machine guns and sniper rifles. “Adversaries used mortars in Verkhniotoretske, and opened fire from 122-mm artillery at our positions in Zaitseve where they launched 30 mortar shells. The enemy opened disturbing fire from mortars in the vicinity of the Svitlodarsk bulge and actively provoked our troops opening fire from mahine guns and APC weapons,” said Col. Motuzyanyk. 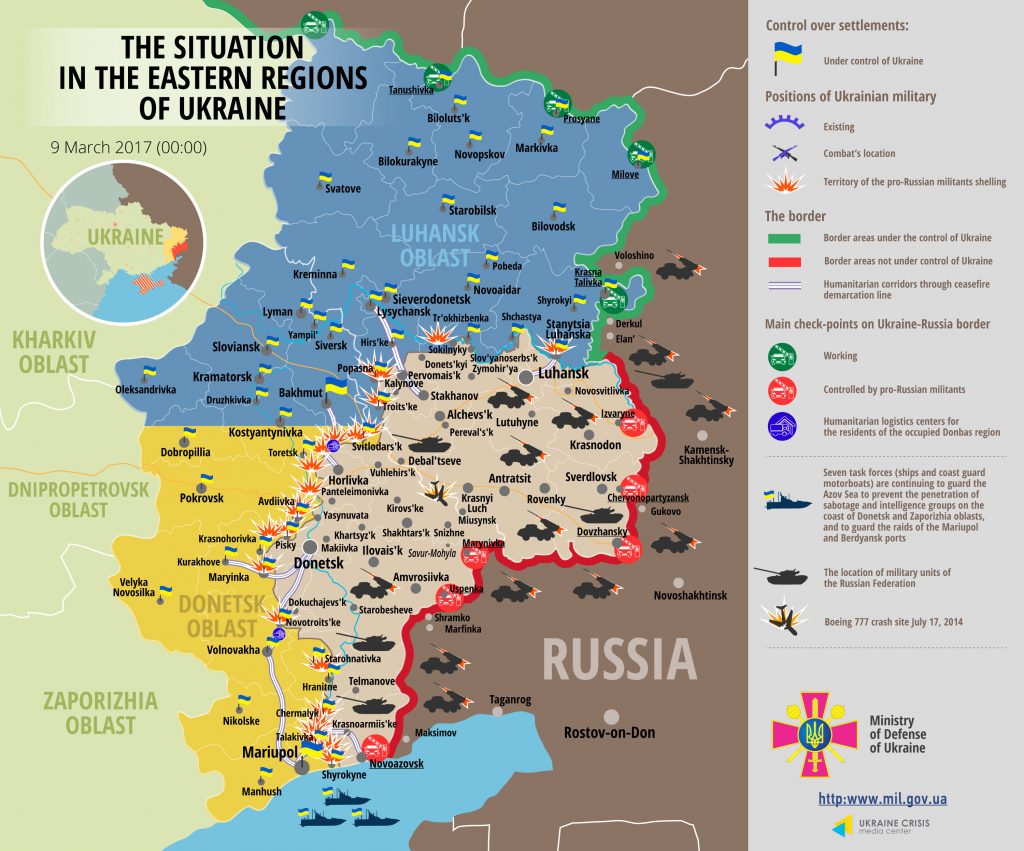 Insurgents delivered medium intensity fire for over five hours in the afternoon in the vicinity of Avdiivka. Militants used only small arms in Kamianka, in the vicinity of Donetsk airport and near Nevelske. Servicemen of Ukrainian Armed Forces found a hostile snipers’ group in the vicinity of Avdiivka’s industrial area and killed one of the snipers. Relative reduction in the number of hostile attacks allowed Ukrainian engineers to conduct repair works in Avdiivka. Donetsk filtering station resumed its operation yesterday. Therefore, the long-suffering town is being supplied with heat, water and electricity under normal conditions,” said the spokesman.

In the Mariupol sector militants traditionally opened fire from small arms during the night. “Main militants’ combat activity, as before, takes place in the southern area of the Mariupol sector. Occupants were shooting from 122-mm artillery at Shyrokyne in the afternoon. Moreover, positions of Ukrainian Armed Forces in Mariinka, Chermalyk and Pavlopil came under mortar fire,” said Col. Motuzyanyk.

Report on the military developments as of March 8 is available here. Interactive data on the shelling: chronology shelling chart and the interactive map.