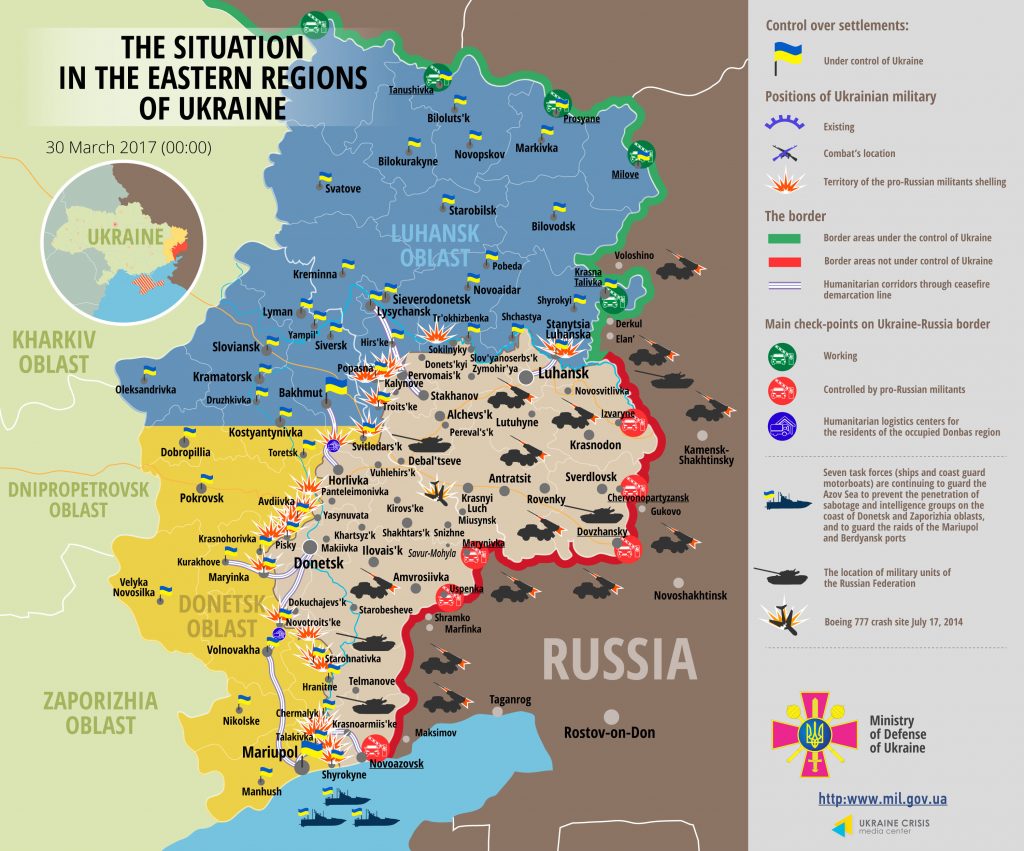 Fifteen hostile attacks took place in Luhansk sector yesterday, and 8 of them involved heavy armor. The situation is the most difficult in the Popasna district. Militants attacked with heavy weapons multiple Ukrainian strongholds at once. They used 120-mm mortars, 122 and 152-mm cannons, and a tank. Russian proxies conducted two nighttime attacks in Stanytsia Luhanska and Valuiske village. According to Col. Motuzyanyk, the situation drastically escalated in Krymske after 18:00. Militants conducted four mortar attacks firing over 40 rounds. Moreover, they used armored weaponry.

In total, 30 militants’ attacks took place in the Donetsk sector yesterday, and 10 of them involved use of heavy armor. About 10 militants’ attacks took place at the Svitlodarsk area in the Donetsk sector, and two of them involved mortars. Two more enemy attacks took place in Zaitseve and Verkhniotoretske between 13:00 and 15:00. The latter involved mortars. Russian proxies delivered two attacks near Kamianka, one also involved mortars. “The enemy violated the ceasefire five times in Opytne and Pisky during the daytime. One attack involved mortars, and snipers were active during another one,” said Col. Motuzyanyk. Avdiivka remained restless, with first attack recorded just after the midnight. It lasted about 30 minutes, and almost 40 mortar rounds were fired. The hostilities continued in the morning, Russian proxies used heavy weapons again. “Intense shelling started after 16:00 and lasted over 7.5 hours. In addition to non-stop fire from light weapons, militants fired over 50 mortar rounds at Ukrainian positions. One of them damaged a power line around 19:00 leaving the town without electricity once again. Moreover, Donetsk filtering station stopped operations. Ukrainian troops and military civil administration are taking all measures to guarantee safety of crews repairing the infrastructure damaged by the militants,” reported the spokesman.

Report on the military developments as of March 29 is available here. Interactive data on the shelling: chronology shelling chart and the interactive map.