Ukrainian Armed Forces incurred no losses in combat, and five troops were wounded.

In the Mariupol sector militants are shooting along the entire frontline. In the south of the Mariupol sector insurgents were placing disturbing fire towards Ukrainian troops’ positions near Vodiane since midnight. “When hostile efforts to provoke our troops fell through, Russian proxies opened fire from 122-mm artillery at 8 a.m. The enemy launched about 50 shells within an hour, but did not stop even then. Occupant troops were actively using APC and full range of light weapons against ATO troops,” said the spokesman of the Ministry of Defense of Ukraine on ATO related issues Colonel Oleksandr Motuzyanyk at a press briefing at Ukraine Crisis Media Center. Militants also used mortar launchers in Shyrokyne and Hnutove, and launched seven cannon projectiles at Ukrainian positions in Pavlopil around 10 p.m. In the Mariinka district Russia-backed militant groups delivered two mortar attacks at Mariinka and Krasnohorivka. “Houses of civilian population also come under militants’ fire – Lermontov street in the south of Krasnohorivka was the most affected. Windows and roofs of residential buildings and farm structures were damaged. Moreover, a local inhabitant’s garage was ruined,” said Col. Motuzyanyk. Militants repeatedly opened fire from APC weapons at Ukrainian positions further southwards along the contact line, in the vicinity of Dokuchaevsk. In total, 29 militants’ attacks took place in the Mariupol sector yesterday, and nine of them involved use of heavy armor. 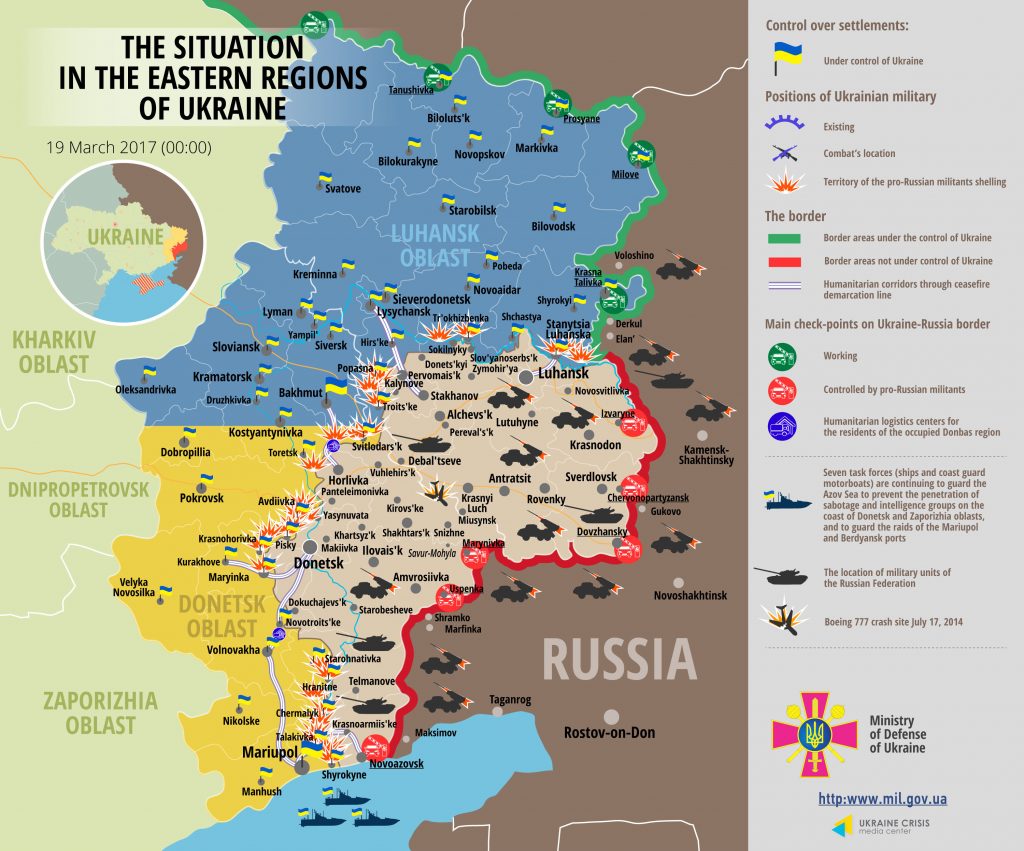 Ukrainian Armed Forces incurred no losses in combat, and five troops were wounded.

Active hostilities continued in the Luhansk sector, which was especially noticeable in Krymske. Militants became active around 10 a.m. there and were massively shelling Ukrainian positions from heavy armor till late night. They launched over 140 mortar shells, 10 152-mm artillery projectiles at Ukrainian positions near Krymske in 24 hours and also shot from tank twice. Moreover, Russian proxies were provoking Ukrainian troops opening fire from small weapons. “Hostile attacks continued in the Popasna district round the clock, but heavy armor was used less frequently. Occupant troops launched up to 30 mortar shells at our positions there yesterday. Most cases of ceasefire violations took place in the outskirts of Popasna,” said the spokesman. Militants launched 10 mortar shells at Ukrainian positions near Syze in Stanytsia Luhanska district in the afternoon, and opened fire from small arms towards Stanytsia Luhanska after the sunset. “In total, the episodes of hostile disturbing fire continued about four hours. 26 hostile attacks took place in the Luhansk sector yesterday, and 10 of them involved use of heavy armor,” summarized Col. Motuzyanyk.

There were no calm frontline areas in Donetsk sector yesterday. Militants were actively using heavy armor during the hours of darkness at the Svitlodarsk bulge, launching around 50 shells. They opened fire mostly from light weapons in this area in daytime, including sniping arms and APC. Northern outskirts of the temporarily occupied Horlivka remain the main area of militants’ activity. Russia-backed militants groups were actively shooting from light weapons there, and sporadically fired mortar shells towards Ukrainian strongholds.

Militants’ combat activity remains high in Avdiivka and the surroundings. “In total, Russian proxies were shelling these strongholds about 14 hours yesterday. Each episode of ceasefire violation was accompanied by use of mortars,” said Col. Motuzyanyk. The situation in the vicinity of the Donetsk airport was calmed than the day before. In total, 30 militants’ attacks took place in the Donetsk sector yesterday, and 17 involved use of heavy armor.