In Donetsk sector of the ATO zone Russia-backed militants violated the ceasefire 17 times, three of these incidents involved heavy weapons. Militants twice shelled Troitske with mortars between 17:00 and 19:00. Two more attacks were recorded in Zaitseve. Near Avdiivka Russian proxies were active after 20:00. “Despite the fact that enemies were not using heavy weapons, they were shooting for three hours from two sites simultaneously. At the same time, the enemy violated the ceasefire in Kamianka and Shakhta Butovka positions,” he said. Moreover, militants conducted two shooting sessions in Pisky between 01:00 and 04:00, and between 12:00 and 14:00, respectively. In addition, they organized a provocation in Nevelske. 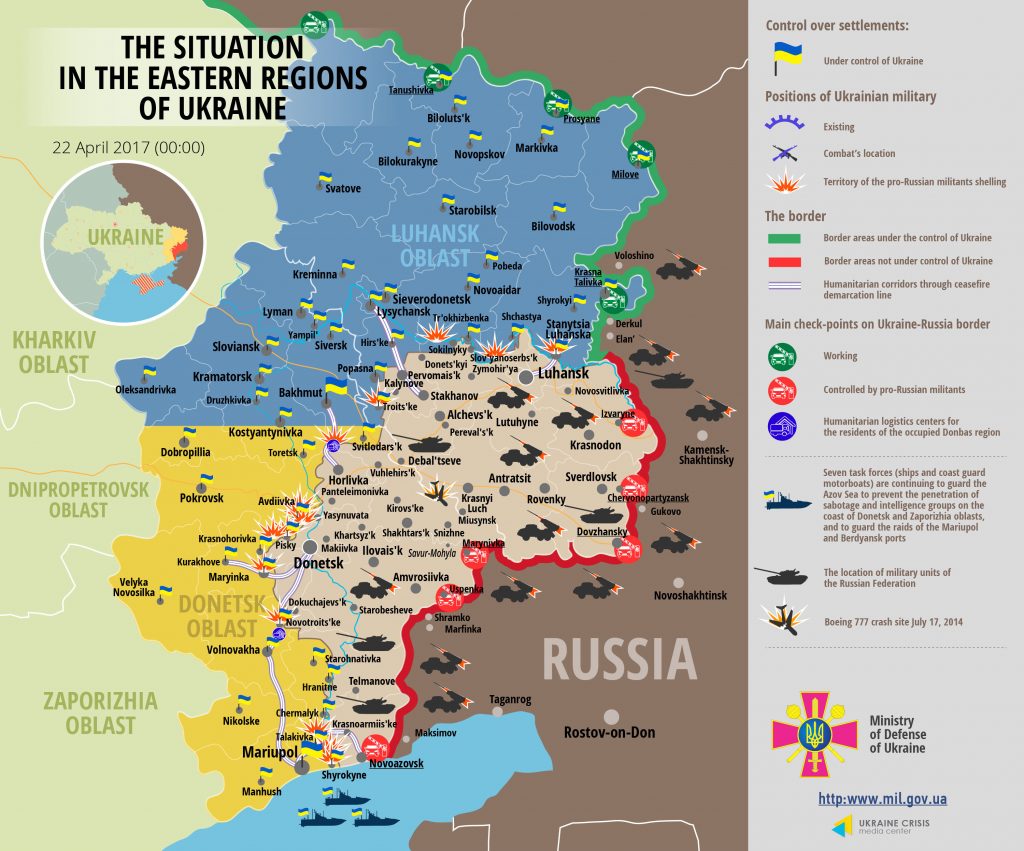 In Mariupol sector militants conducted 19 ceasefire violations, 4 of which involved heavy weapons. They started shelling Maryinka just after midnight. “Russian proxies were shelling residential quarters with mortars and tank weapons. Moreover, they were shelling Ukrainian positions both during the day and in the nighttime. Militants’ nighttime attack damaged five residential buildings in Maryinka. After the attack the police found and defused an unexploded shell near one of the buildings. The hostilities paused only after 14:00. Thankfully, no civilian was hurt,” said Col. Lysenko. The situation was the most restless in Vodiane, though militants used no heavy weapons there, which is unusual. In Novotroitske militants conducted a 40-minute attack with small arms and mortars, and in Pavlopil – Shyrokyne frontline they used machine guns to attack several Ukrainian strongholds.

In Luhansk sector hostilities took place only between 19:00 and 23:00. “Krymske was the main flashpoint of the sector yesterday. Two mortar attacks took place there. Russian proxies used mortars of various calibers deployed in multiple positions,” emphasized the spokesman. Another two armed incidents took place in Zhovte. “Militants were shooting from two different positions here as well, but no heavy weapons were used,” he elaborated. Russia-backed militants also violated the armistice in Stanytsia Luhanska. Meanwhile, the ceasefire held at Novotoshkivske – Troitske frontline yesterday.