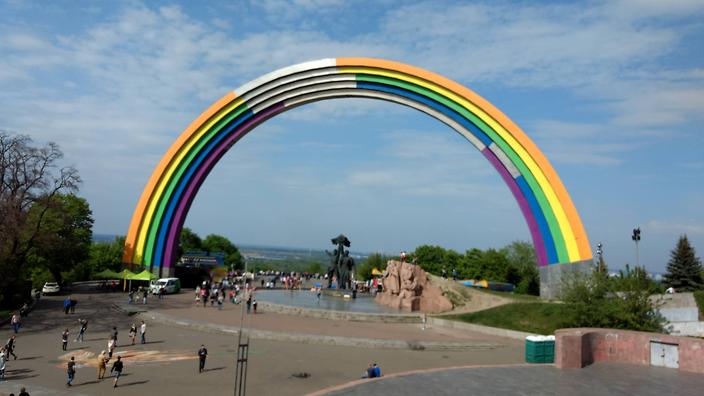 The Friendship of Nations Arch, a monument dedicated to the unification of Ukraine and Russia, temporarily adopts a new look and a new symbolic name – the Arch of Diversity. Now, Kyiv’s iconic landmark resembles a huge orange-to-purple rainbow. The art object sends a powerful message to Kyiv’s locals and visitors: “Ukraine is proud to be diverse”. The project was made possible with the support of Kyiv City State Administration at a zero cost for the city.

The metal Arch is 30 meters high and has a diameter of 50 meters. It is a part of the sculptural group constructed in 1982 to honor the merger of territories in control of the Zaporizhzhian Cossacks with the Muscovite Tsardom that occurred in 1654. The Soviet historic narrative presented the event as “unification of Ukraine with Russia”, while in fact the treaty itself was more of a political and military alliance. Moreover, it was legally denounced in 1667 when the Muscovite Tsardom signed a truce with Polish–Lithuanian Commonwealth (against which the treaty with Zaporizhzhian Cossacks was signed earlier). Therefore, the monument has been a quite controversial topic lately, especially with regard to official decommunization.

It is not a coincidence that the re-creation of the Soviet landmark took place days before Europe’s largest song contest, Eurovision 2017. The motto of this year’s show is “Celebrate Diversity”, and the host-city Kyiv used every possibility to get this message across to its local and foreign festival fans.

“The Arch calls to celebrate diversity in all of its meanings: racial, linguistic, musical, sexual. Looking on this art piece, everyone sees a unique aspect of diversity. I consider Ukrainian society to be free and open-minded enough to respect any manifestation of diversity, which we tried to convey through this art piece,” tells Gennadiy Kurochka, the author of the idea, Managing Partner of CFC Consulting [NB: CFC Consulting has been supporting Ukraine’s communications at all Eurovision competitions for the past 12 years].

Although it was expected that the rainbow colors will cover the entire monument, its top segments remain unpainted. This showcases Ukraine’s continuous and relentless efforts to break away from the Soviet and Russian legacy, to seek new meanings and pave its own path as an independent European state.