Ukrainian Armed Forces incurred no losses in action in the ATO zone yesterday, yet five servicemen were wounded. Militants conducted 63 attacks, 19 of them involved heavy armor.

In Donetsk sector militants were shooting from small arms and APCs during the day, and used mortars after 19:00. Russia-backed militant groups used heavy weapons at Svitlodarsk area, near Horlivka, in Avdiivka, and in Pisky, reported Ukrainian Ministry of Defense spokesman on ATO Colonel Andriy Lysenko at a press briefing at Ukraine Crisis Media Center. “The shooting attack in Pisky was the most intense: it lasted over two hours, the enemy fired 30 mortar rounds and actively used armor and light weapons,” he said. In Avdiivka Russian proxies were shooting from several directions simultaneously, namely from Spartak and Yakovlivka. A total of 15 ceasefire violations were recorded in Donetsk sector, seven of them involved heavy weapons. 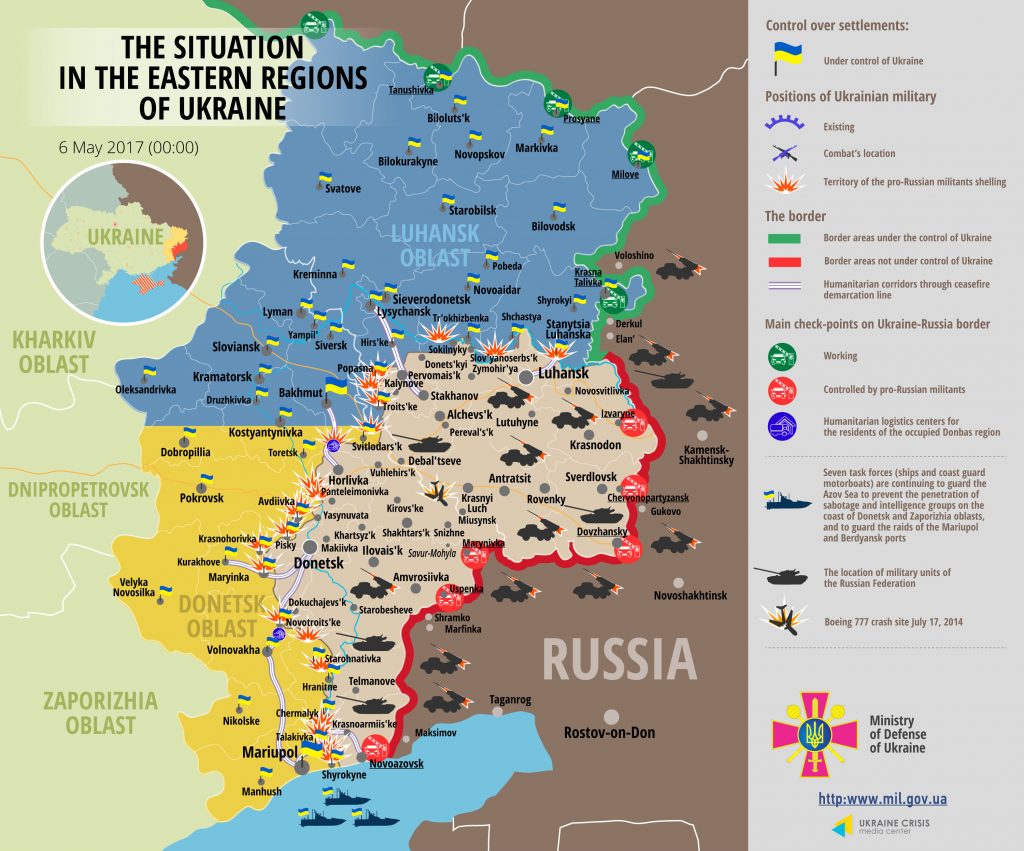 The situation somewhat escalated in Maryinka district of Mariupol sector. “Militants repeatedly used armor and mortars in this area yesterday. They hit residential quarters several times. For instance, in Krasnohorivka they damaged the windows in the local hospital, and an empty residential house. Unfortunately, one of enemy attacks wounded a civilian woman,” elaborated the spokesman. Russian proxies conducted several small arms provocations in Novotroitske, Novohryhorivka and Bohdanivka. The situation is traditionally restless in the south. “Militants were actively violating the ceasefire day and night, mostly with light weapons. However, between 16:00 and 20:00 they used mortars in Pavlopil and Vodiane, and artillery in Hnutove,” added Col. Lysenko. A total of 34 ceasefire violations were recorded in Mariupol sector yesterday, seven of which involved heavy weapons.

Report on the military developments as of May 5 is available here. Interactive data on the shelling: chronology shelling chart and the interactive map.