One Ukrainian soldier was killed in action and five were wounded yesterday. “We had not incurred lethal casualties since May 11,” noted Ukrainian Ministry of Defense spokesman on ATO Colonel Andriy Lysenko at a press briefing at Ukraine Crisis Media Center.

In Novoluhanske in Donetsk sector pro-Russian militants attacked with mortars several times before dawn, firing about 30 rounds. Several shells hit a farming enterprise. Militants were mortar shelling Avdiivka for about one hour. They continued shooting from mortars in the evening. “According to JCCC, three local inhabitants sustained fragmentation wounds as a result of a projectile explosion near a public transport stop. The casualties were instantly taken to hospital. Another round exploded near a residential building,” said Col. Lysenko. Non-stop mortar attack from several directions continued for three hours there. “At the same time militants instigated a lengthy engagement near Kamianka and Shakhta Butovka positions to disperse Ukrainian troops. Our soldiers won the fight. However, the enemy conducted several more provocations in Zaitseve, Pisky and Nevelske,” added the spokesman. In total, militants attacked 14 times in this sector. 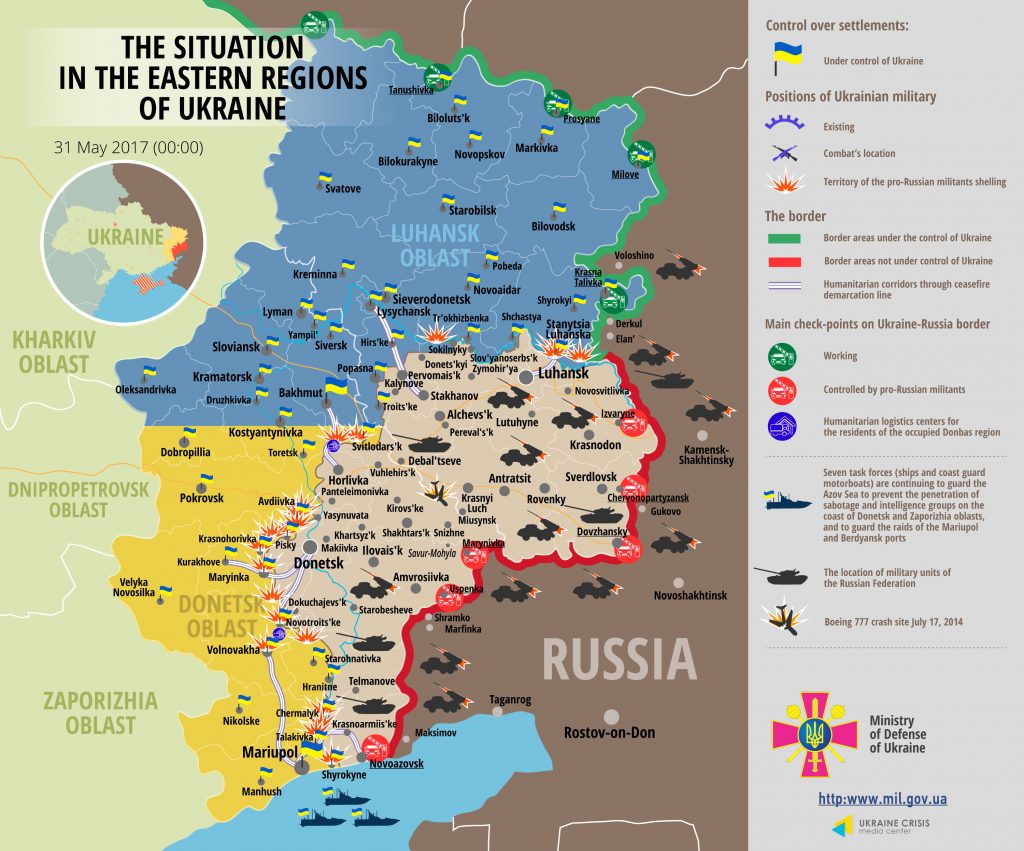 In Mariupol sector the day started with escalation near Novotroitske. Militants were shooting from cannons, mortars and light weapons for 100 minutes. At the same time, Russian proxies shelled the rear area 12 km to the south, near Volnovakha, with 152-mm artillery. “Militants conducted another mortar attack near Novotroitske in the evening, and a series of small arms provocations in Bohdanivka, where the sides disengaged their troops and weapons several months ago,” informed Col. Lysenko. The situation was restless in Maryinka district and in Pavlopil-Shyrokyne frontline, where militants’ snipers were active. In total, pro-Russian groups attacked 24 times in Mariupol sector.

Report on the military developments as of May 30 is available here. Interactive data on the shelling: chronology shelling chart and the interactive map.