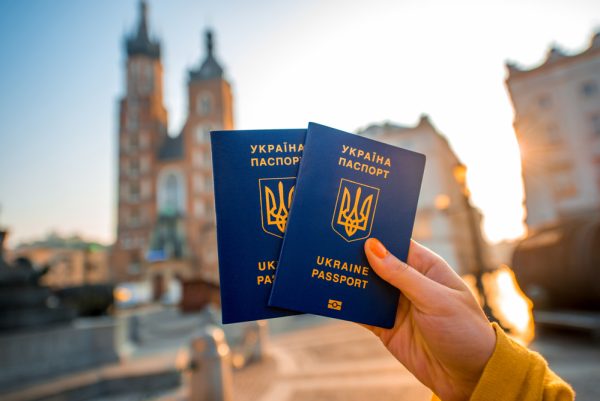 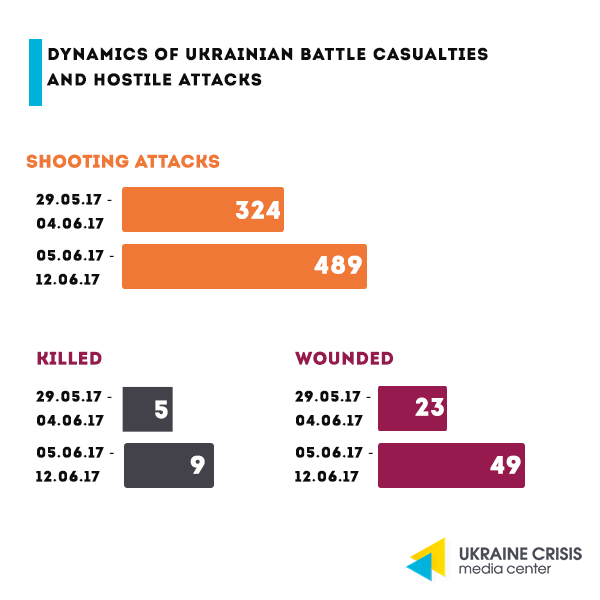 Armed hostilities continue in eastern Ukraine. On June 11 militants used Minsk-proscribed weapons in all sectors. The enemy continued shelling residential areas in Krasnohorivka and Maryinka. As a result of hostilities, two civilians were wounded. The villages of Olhynka and Hrafske were also shelled. Dozens of houses were damaged, and a part of these villages was left without light due to the damage at an electrical substation. In their reports OSCE confirms  civilian casualties in the settlements between Donetsk and Krasnohorivka over the last 2 weeks.

Ukrainian troops occupy new positions in the gray zone. Last week, the 1st and 2nd battalions of the 93rd mechanized brigade of the Ukrainian Armed Forces took new areas close to Bakhmut road and took the village of Zholobok. They moved gradually and continuously over the past eight months and continue moving in various areas, said the chief editor of Cenzor.Net.

According to Ukrainian fighters, militants had to use the way forward near Zholobok to expand the area and continue attacking. Officers in command stress that under the Minsk agreements the area is controlled by the government, so there can be no separatists there. According to the Minsk agreements, this area should be controlled by Ukrainian forces.

Russian artillerymen in the war against Ukraine. Through social media, the volunteer investigative project InformNapalm identified 81 artillerymen of the 291st artillery brigade of the Russian army who were involved in malicious attacks on Ukraine in 2014 from the Russian territory and in combat operations in Ukraine. Analysis of the artillerymen’s photos shows that the 291st artillery brigade, mainly soldiers conscripted in the autumn of 2013 who served in the howitzer and multiple launcher rocket system battalions, were transferred to the area of Rostov region bordering on Ukraine from the end of the summer of 2014 (infographics).

Disclosure of secret Russian intelligence network in Donbas. The Security Service of Ukraine reported  that its employees disclosed a network of agents in Donbas, which was organized by the Main Intelligence Directorate of the General Staff of the Armed Forces of Russia.

Law enforcement officers found that Russian secret services had recruited two residents of Lysychansk and Kostyantynivka through friends in temporarily occupied areas of Donbas. They were ordered by Russian curators, who acted under the guise of “law enforcement” bodies of the so-called “LPR” in Luhansk, to create an extensive network of informants in the government controlled territory of Donbas. 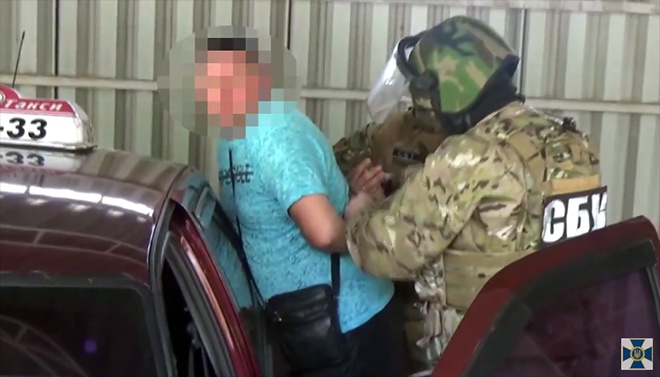 Abolition of teaching in Ukrainian. The “DPR” declared full transition from Ukrainian to Russian language of teaching in educational institutions. This was announced  by the leader of the self-proclaimed “republic” Aleksandr Zakharchenko, according to a militants’ resource. “The transition to the Russian language of teaching was made by stages over three academic years in the “DPR” secondary educational institutions,” he said. Zakharchenko states that the process began in 2014. According to him, 50% of pupils were studying in Russian then and in 2015 it was 88%. Now, says the “DPR” leader, this figure has reached 100%. 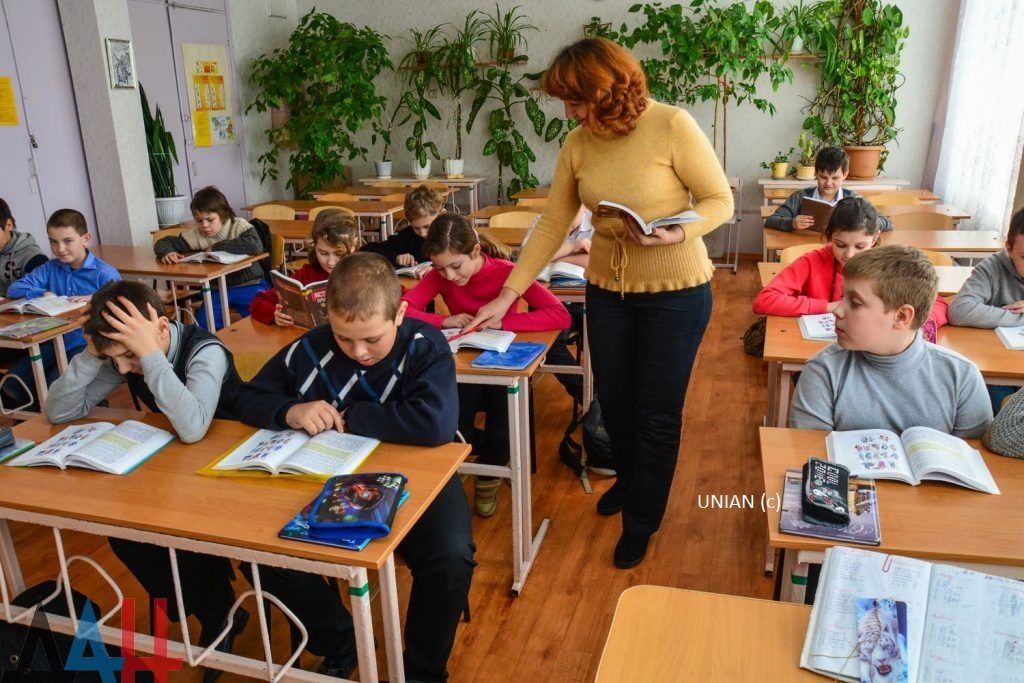 On June 11, citizens of Ukraine were granted visa-free travel to the Schengen area. The way there was difficult and interesting.

Now every citizen of Ukraine with a biometric passport, having an invitation, insurance, return ticket and proof of accommodation may cross the borders  of the European Union at any convenient time.

The State Border Service of Ukraine reports  that over 98,000 Ukrainians went to EU countries as of 2 p.m. of June 12, including 15,195 ​​with biometric passports. Around 2,300 Ukrainian citizens were able to travel to Europe without a visa.

The most popular destination is Poland. “63% of Ukrainians began their acquaintance with Europe with this country,” informs Oleh Slobodyan, noting  two failures to cross the border.

According to the Ukrainian State Migration Service, over three million biometric passports have already been issued.

Former MP and Donetsk Automaidan activist Yehor Firsov informed  about disappearance of the Ukrainian journalist who has lived in Donetsk since the occupation and under the pseudonym Stanislav Vasin wrote articles for the Ukrainian media. Later the Security Service of Ukraine confirmed this information.

Firsov told Radio Donbas Realities that the authorities of the self-proclaimed “Donetsk People’s Republic” do not give any information on his whereabouts to Stanislav Vasin’s relatives. It is known that Stanislav’s mother spoke with him on June 2. The next day they were to meet in Makiivka, but Stanislav did not get in touch. Besides, according to Firsov, there are signs of break-in and search in Vasin’s apartment.

Stanislav Vasin prepared reports about the life in Donetsk for the Ukrainian Service of Radio Liberty and other media. 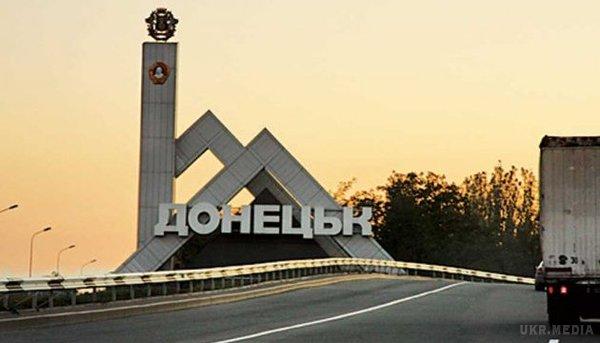 The best Ukrainian investigative journalists were awarded at “Mezhyhirya Fest-2017” (MezhyhiryaFest). The festival is held for the second time in the former private residence of former President of Ukraine Viktor Yanukovych near the place where soon after his escape from Ukraine in 2014 the documents were found proving corrupt practices of ex-president and his entourage.

Alisa Yurchenko (bihus.info) became the winner  of this year’s National Award for Investigative Journalism and Special Reportage for work in the context of introducing electronic declaration of fortunes of officials ”Daughter of the head of the State Specialized Communication Service refuses to conduct an examination of the electronic key certificate in the name of Ryaboshapko and fake ID code”.

The award was also given to Mykhailo Tkach (Skhemy: Corruption in Details) for his investigation of Prime Minister’s real estate ownership. The journalists also received the awards named after their colleagues Georgiy Gongadze and Pavlo Sheremet.

Culture: Ukrainian animation at the International Festival in Annecy (France)

Ukrainian animation for the first time is presented at the national stand at the International Animated Film Festival in Annecy (France).

The Annecy International Animated Film Festival and Market is one of the key events of the animation industry in the world. The Ukrainian stand at the film market was initiated by ”Ukrainian Animation Association”, established by the professional community representatives. The Ukrainian State Film Agency supported the initiative. “We want to prove that Ukraine is not just a labor force, but also the source of unique stories and artistic images,” comments Olena Holubeva, the executive director of the Ukrainian Association.

On June 14, the stand will present the animated projects in production. On June 15, a teaser of one of the most ambitious projects of the Animagrad studio “Mavka. Forest Song” will be premiered. It is based on the classic work of Ukrainian literature, and created by the team composed of fashion designers and ethnographers. 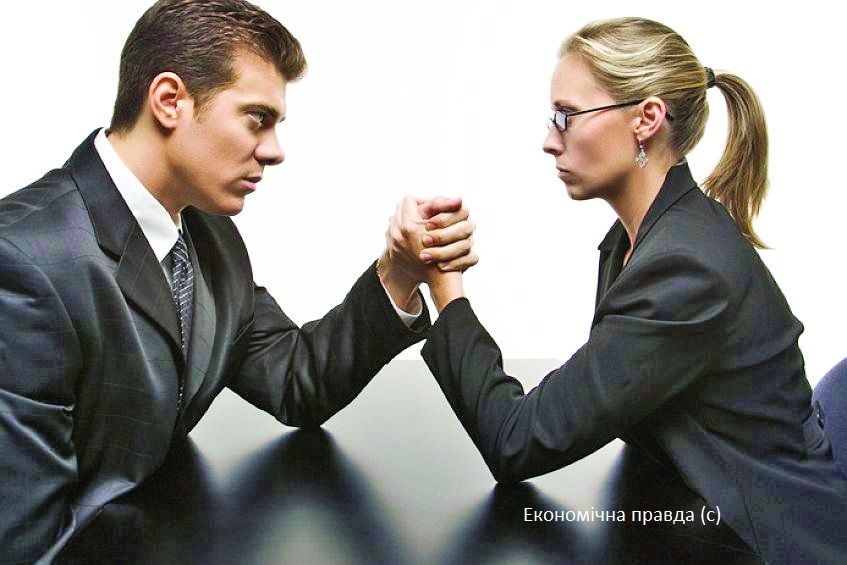 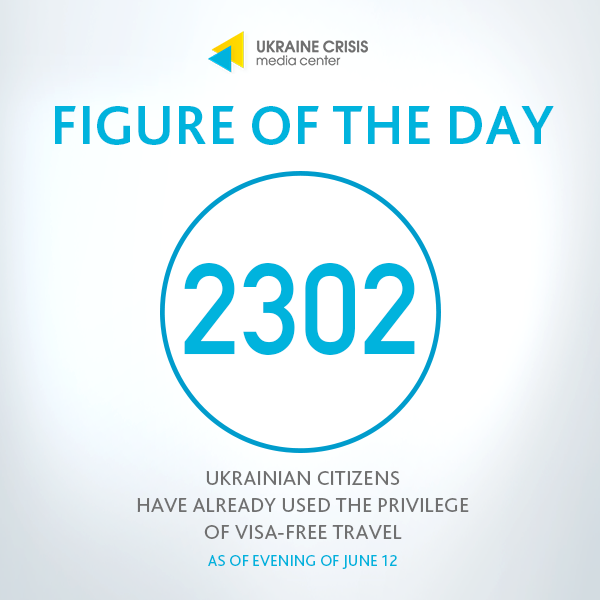 “Are there “independent” media in Russia and why would Putin need them?” – LB.ua

”Naftogaz  vs  Gazprom: a new round in an old bout” – The Day