Militants conducted two attacks in Luhansk sector yesterday – in Luhanske and Shchastia. These incidents happened after the sunset. In both cases militants used heavy armor,  firing the total of 20 mortar shells. “SMM OSCE representative office came under hostile fire.  There were no casualties among the mission representatives, but the office had to be evacuated,” informed informed Ukrainian Ministry of Defense spokesman on ATO related issues Colonel Andriy Lysenko at a press briefing at Ukraine Crisis Media Center. 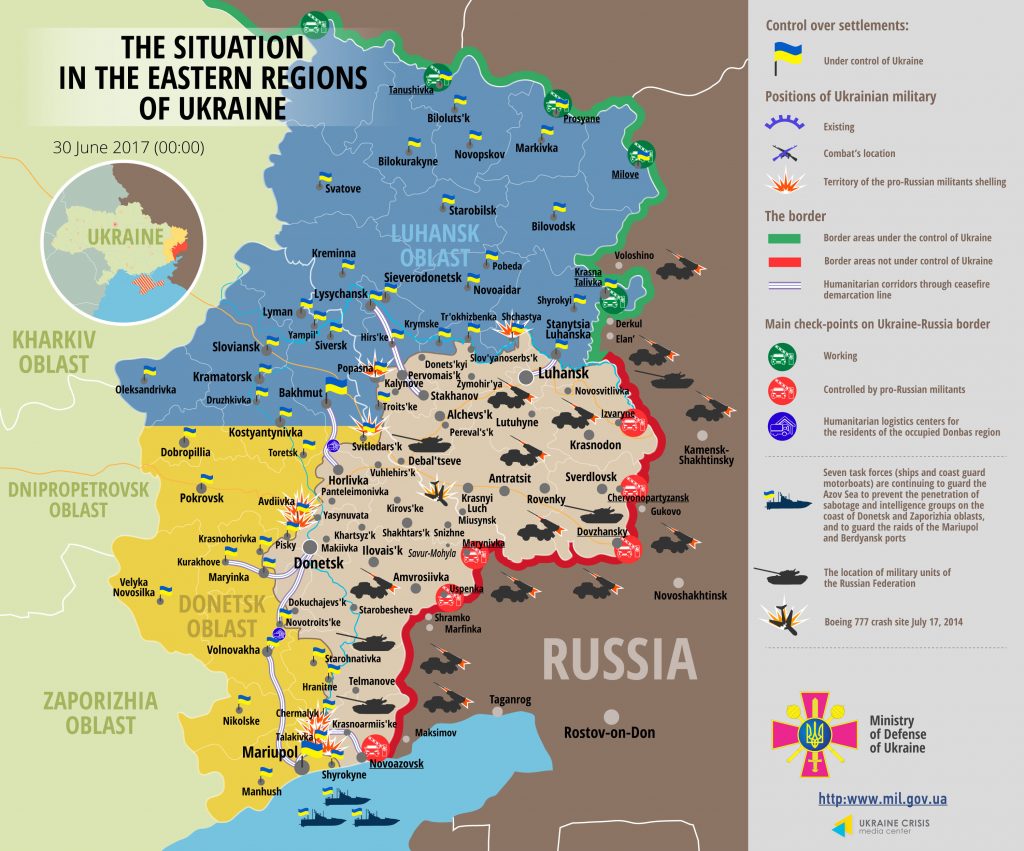 In Donetsk sector the escalation trends hold in the vicinity of Avdiivka. Hostilities started after the midnight near the city and near Kamianka.

They resumed after the recess from 03:00 till midnight and lasted till the end of the day.

Russian proxies were actively using heavy weapons – artillery and tanks deployed in the frontline in Vasylkivska and Yasynuvata.  Most intense hostile attacks were registered in the afternoon when the lion’s share of hostile attacks. According to the General Staff, Russian proxies fired over 10 projectiles and over 40 tank projectiles and 100 mortar shells at ATO troops at Kamianka-Avdiivka-Shakira Butovka frontline,” said Col. Lysenko. Russian proxies opened fire at the Svitlodarsk area using APC weapons and grenade launchers. They also fired two mortar shells. In total,  12 hostile attacks occurred in Donetsk sector.

In Mariupol sector The ceasefire held in Maryinka district and near Dokuchaevsk. Attacks continued in the southern direction from Pavlopil to Vodiane.  “The enemy used no heavy and opened fire from various grenade launcher,  automatic weapons and APC weapons.  In total, there were eight attacks of that type,” said the spokesman.

One Ukrainian serviceman died in action and six were wounded yesterday.

Report on the military developments as of June 29 is available here. Interactive data on the shelling: chronology shelling chart and the interactive map.