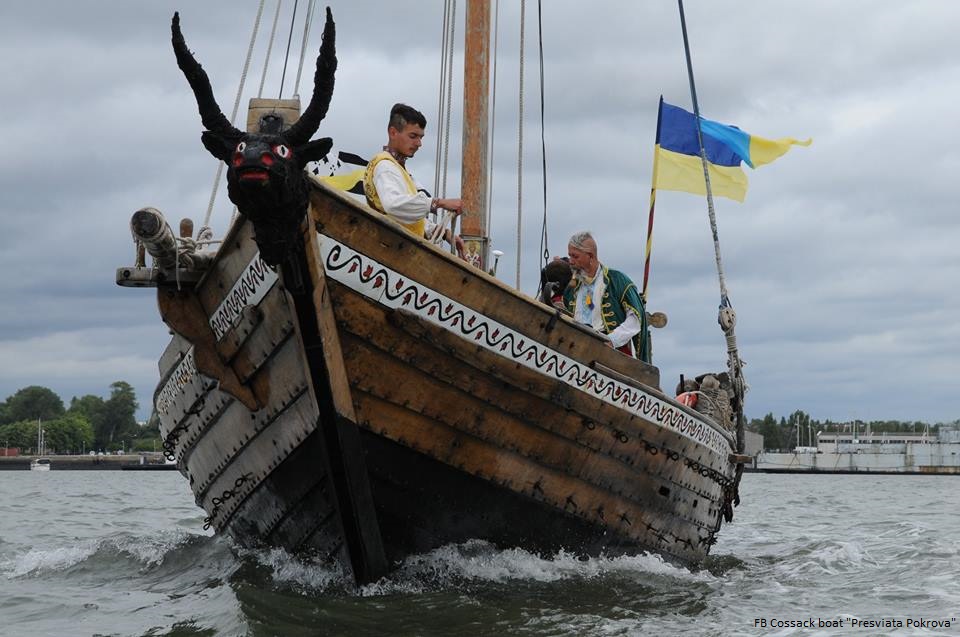 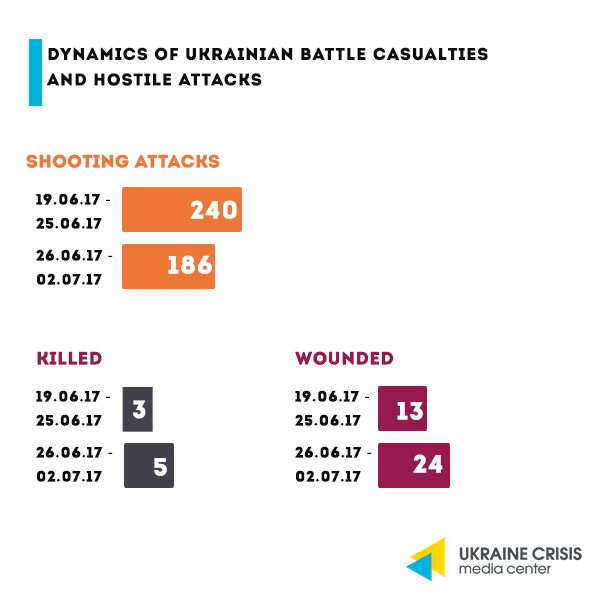 Situation in the combat zone. Last week the intensity of combat actions in eastern Ukraine decreased by 40 per cent in comparison to the previous reporting period. The number of incidents with the use of heavy weapons has also gone down considerably. Last week OSCE Special Monitoring Mission (SMM) to Ukraine registered about 110 explosions attributable to heavy weapons. The week before the respective number of attacks amounted to 617. It constitutes an almost 80 percent decrease.

OSCE. The OSCE mission registered intense fire in the area of its patrol base in Popasna (in the government-controlled part of Luhansk region) at night on June 29 and early in the morning on June 30. Mission staff stayed safe at the patrol base. On June 30, they went to Sievierodonetsk for a de-brief and later came back to Popasna.

War casualties in 2017. One hundred and twenty Ukrainian troops have been killed in action in Donbas this year. The data was voiced by Ivanna Klympush-Tsintsadze, Deputy Prime Minister on European and Euroatlantic Integration, at a NATO seminar in Kyiv. According to the Deputy Prime Minister, about 900 servicemen were wounded, 47 civilians were killed and 100 got wounded over the period of time in question.

“DPR” offers paid protection to OSCE. “DPR” militants offered the OSCE mission “protection” for 3,000 euro per month. Following several militant attacks upon the OSCE patrols, “leaders” of the “republic” did not introduce any safety measures. On the opposite, they called back the “police” from the mission’s office located at the Park Inn hotel in Donetsk. At the parking lot where the mission’s vehicles are parked, a “spontaneous” fire took place.

“DPR” leader sees local youth integrated into the “Russian world”. “DPR” leader Aleksandr Zakharchenko said that he wanted to integrate the youth into the “Russian world”. In his opinion, the education system in the area outside of the government control needs to be synchronized with the Russian education system so that more school students can get educated in Russian universities.

Ukraine’s Security Service noted that the cyber-attack aimed to destabilize the social and political situation in the country. The authority said the action was planned in advance. It was unfolding in several stages and took place on the eve of a national holiday.

Energy sector: Ukraine gets one step closer to the EU

On June 28 in Brussels Ukraine’s state-owned company “Ukrenergo” signed the agreement that sets the conditions for Ukraine to join the EU energy grid. The document is called the “Agreement on the conditions for the future integration of power systems of Ukraine and Moldova with the grid of continental Europe”. Ukrenergo head Vsevolod Kovalchuk said that the signed agreement “aims at disintegrating Ukraine’s energy system from the Russian one, fundamentally changing the rules in the energy sector, introducing the provisions of the EU’s Third Energy Package as well as establishing a competitive environment in the energy market.” In Kovalchuk’s opinion, the process of integration of Ukraine’s energy system with the EU grid will be accompanied by an active information campaign launched by Russia to discredit Ukraine’s intentions.

Will the visa regime with Russia be put into effect?

Oleksii Makeiev, Political Director at the Directorate General for Policy within Ukraine’s Foreign Affairs Ministry said that the agency is working to possibly introduce the entry/exit to/from Ukraine for the Russian Federation citizens upon the presentation of the biometric passport only. He also said that other options are being considered including limiting entry for some categories of Russian citizens, defined in cooperation with the Security Service, or introducing the visa regime. According to a recent opinion poll by Ilko Kucheriv Democratic Initiatives Foundation, 51,4 percent of respondents do not support the possible introduction of visa regime with the Russian Federation; 32,9 percent expressed themselves in support of the idea, while 15,7 percent were undecided. Visa regime has the highest support with residents of Western Ukraine (60 percent) and lowest support in the country’s south (14 per cent). 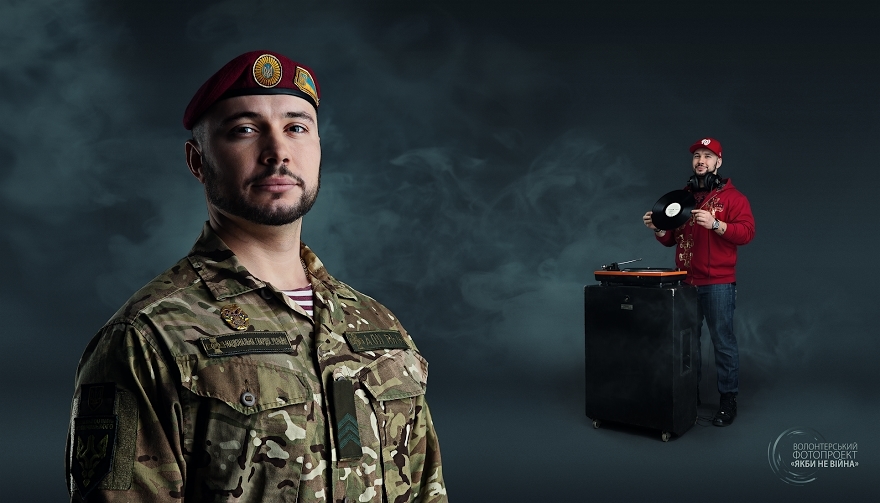 On June 30 Ukrainian serviceman Vitalii Markiv was arrested on entry to Italy, he has been charged with the murder of Italian photojournalist Andrea Rocchelli. Rocchelli and the Russian human rights defender Andrey Mironov were killed on the outskirts of Sloviansk, Donetsk region, in May 2014. The Ukrainian side is investigating the case. The course of the investigation has been part of the discussion during bilateral Ukrainian-Italian talks quite a number of times including high-level ones. According to the Deputy Prosecutor General of Ukraine Yevhen Yenin the Office of the Prosecutor General has been actively cooperating with the Italian counterparts. On the Italian side, the Prosecutor’s Office of Pavia is in charge of the investigation. Markiv’s arrest came as a surprise to the Ukrainian side.

“According to the Ukrainian investigation, the death of the two journalists resulted from an artillery attack on the part of the Russian-terrorist troops,” said Yenin. Later speaking on a Ukrainian TV channel the Deputy Prosecutor General said that the data obtained through the investigation points at least at the crossfire in the area. Attempts to analyze the data from open sources demonstrate that the positions of Ukrainian troops, as well as the weapons they were in possession of back then, would have made it impossible for them to hit the area where the Italian journalist was. Ukrainian investigation did not identify the persons on either side responsible for the tragic episode.

On July 1 the Ministry of Internal Affairs of Ukraine released a statement saying that it was a French journalist who pointed to the Italian authorities at the unit in which Markiv was serving as the one responsible for the death of Rocchelli. (The journalist in question is probably the one who was present on the spot and was wounded). Moreover, as part of his testimony the journalist provided a video, the agency said.

Vitalii Markiv is a deputy platoon commander at the General Kulchytsky battalion with the National Guard of Ukraine, senior sergeant. Markiv is Ukrainian, in 2003 he moved to Italy with his family. He returned back to Ukraine during the Maidan times, later enlisted in the National Guard and was fighting in the east of Ukraine. Markiv was coming back to Italy after 2,5 years of absence to see his mother who still resides there.

The court hearing in the case is scheduled for July 4. Ukrainian diplomats in Italy addressed the Italian authorities to let the consul see Markiv as well as be present at the court hearing.

Culture: money is raised in Lviv to renovate the legendary Cossack boat

An exhibition is on at the Lviv Arts Gallery “Dzyha” that aims at raising money to renovate the traditional Cossack boat currently stationed in France. The Chaika “Presviata Pokrova” was constructed in Lviv in 1992 and is an exact copy of the Cossack warship of the XV century. The boat was created based on the archive technical drawings of the Cossack fleet pertaining to the period of time when they were sailing across the Danube river and storming the Turkish fortress of Izmail. Over the 25 years “Presviata Pokrova” has taken part in numerous competitions, festivals and film shooting events. Over the last several years resulting from the lack of financing the boat did not have proper care and was damaged. It is currently stationed in Pont-Aven in western France. Thanks to a crowdfunding campaign in 2016 renovation works of the legendary Chaika were started. Artistic items showcased at the Lviv exhibition use the elements of the boat. The exhibition “Chaika. Reminiscence 1992-2017” is on until July 7. Follow the Facebook page of the project for the updates on the fate of “Presviata Pokrova”.

Ukrainian national volleyball team won the European League in Denmark. In the final game, Ukrainians won from the Macedonian team scoring 3:1. It comes as the first European award for the Ukrainian volleyball athletes. 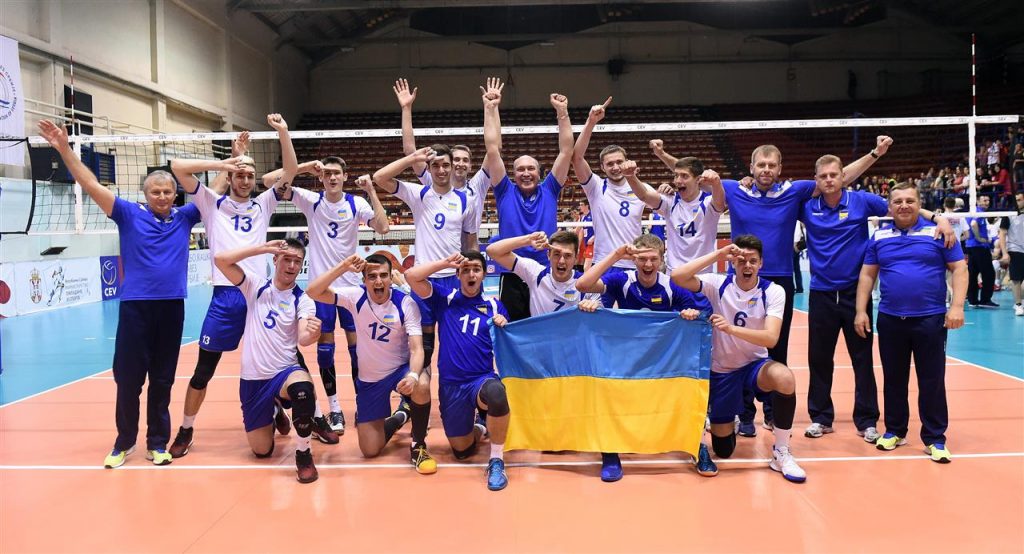 ”Some 120 Ukrainian soldiers killed in Donbas year to date” – UNIAN

”The life of youth under occupation in eastern Ukraine” – Hromadske International

”Who is the Russian soldier captured in eastern Ukraine” – Hromadske International