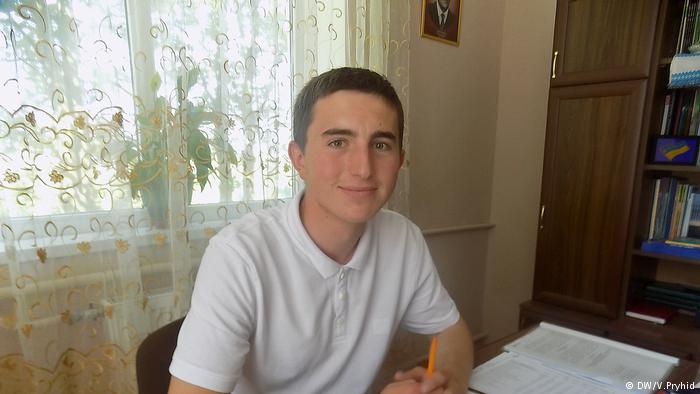 Oleh Karapinka has been the youngest village head in Ukraine for two weeks already. He is only 22 years old.

UCMC publishes an abridged translation of the Deutsche Welle article about the age aspect of decentralization success.

The year 2014 witnessed the implementation of decentralization reform in Ukraine. It guaranteed more powers to local self-government bodies, changed the territorial structure of local self-government, led to logistically efficient united territorial communities. But there is another, less noticeable aspect of decentralization: the increased percentage of young people in elective offices.

The first days in office

Oleh Karapinka has been the youngest village head in Ukraine for two weeks already. He is only 22 years old. This summer, he received a bachelor’s degree at Lviv Polytechnic National University but is going to continue his studies and apply for a Master’s degree in business administration. This is the third graduation of the young head. He has also graduated from the Lviv College of Radio Electronics and the Sambir College of Culture and Arts.

He is in charge of two villages in Horodok district of Lviv region – Drozdovychi and Halychany – with about fifteen hundred residents.

The first days in a new post were not difficult for the boy. “I’m not an outside man who suddenly got into this position from nowhere. I have been a deputy to the district council for two years, and I know something about specific problems, talked a lot to the previous village head. I knew what to expect,” says Karapinka. And although the reception hall is empty now, he accepts a few visitors daily. As a rule, they come with a request for land or subsidies.

These cases, says Karapinka, are not complicated, but he has to look through a large number of documents, so there is always a lot of work to do. The only thing he managed to do over two weeks besides his responsibilities was to clear a bookcase from the papers remaining after the previous head. As to his own books, he brought only two reference books to the office – “How to write micro-projects for communities” and “Samples of business documents”. He honestly admits: if he does not know what kind of document is being signed, he puts it aside and studies, and signs it only the next day.

Karapinka admits that he has bigger ambitions: first to become a deputy of the regional council, and then of the Verkhovna Rada. The boy has taken interest in big politics since childhood. But watching election races has taught him two lessons: be careful with the parties and do not give empty promises. That was the way he went to his own election: without promises and without the support of any political parties.

His own election races were not complicated because he had only one competitor, who was twice his age. “People already knew me as a deputy. They saw that I was doing something. We started repairing the road in Halychany and I chose cobblestone because it is more cost-efficient than asphalt. If there is a pit, a few squares will be easier to replace than to patch asphalt. We also found money to purchase medical equipment for a medical and obstetrical station in Drozdovychi. The People’s Home in Halychany received an updated sound system,” he says.

His villages are not the poorest ones. There is a brick factory in one and an enterprise for the production of rubber car mats in another. In general, the budget of the two villages slightly exceeds a million hryvnias. This is neither much nor little, says Karapinka. According to his calculations, LED outdoor streetlights for the whole village will cost about 200,000 hryvnias. But he has other plans as well: a road in his home village of Drozdovychi, provision of necessary facilities at the stadium, water supply. There may be not enough money to do everything planned. Then the young head plans to ask for subsidies from the district or regional budget.

Youth are in favor of the new head

Young people are optimistic; so, they entrust their voices to the young village head. They believe that he will understand them better.

“If he wants to set to work, let him do it. He ran for office in the Horodok district council, he must know something,” says young local resident Roman Chornyy about the new village head.

Some older people still have a bias against the young head. For example, Mariya Zharovska who worked as an accountant in the Halychany village council for 45 years, and therefore has the experience of working with a dozen different village heads. “Young people think that they will come and do everything and at once. But this is not the case because it is public money with a monthly budget breakdown by items. Sometimes there are no revenues to make expenditures. This should not be done in a hurry. But young people are young people. They want everything and now,” the woman says.

According to Karapinka, to do everything simultaneously the village must make money. For this, in his opinion, first of all, it is necessary to return the village land captured by dishonest entrepreneurs. It is 515 hectares, mostly with lakes. If the head manages to win this territory, then he will make recreation areas with beaches and other infrastructure there. The villages could earn on this. That is why the young head’s aim is to make his villages rich.