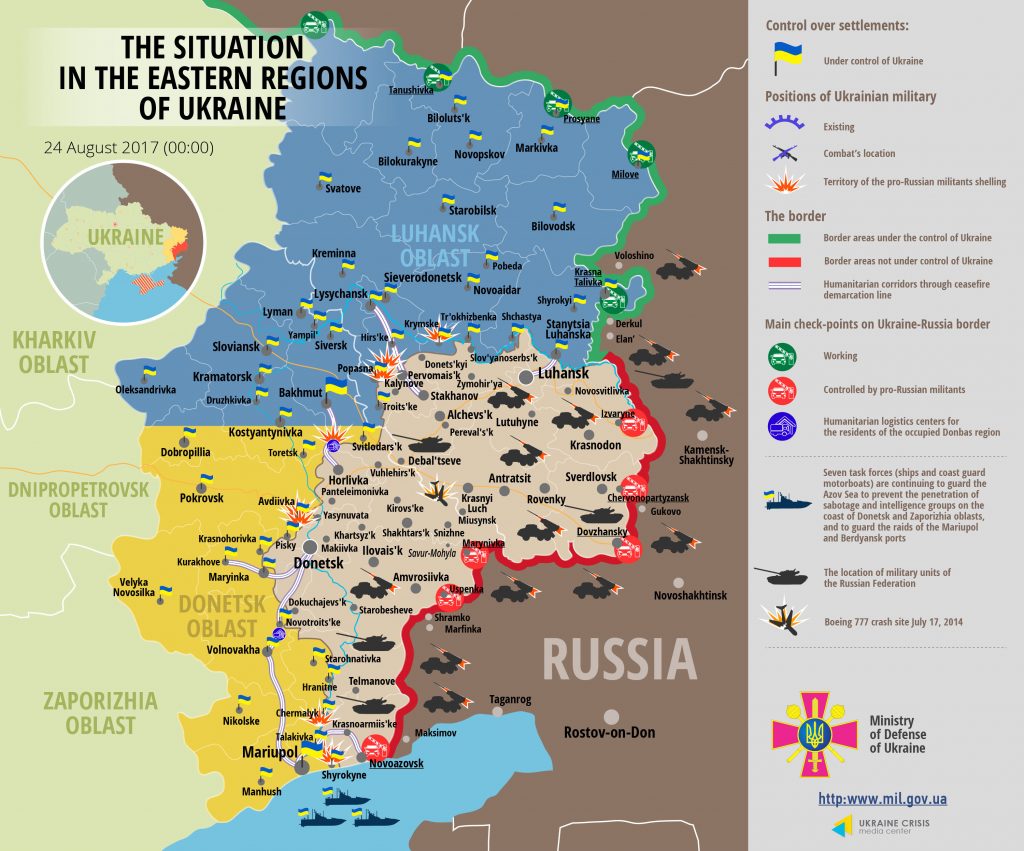 In Donetsk sector militants violated the ceasefire seven times – in Avdiivka, Zaitseve and Shakhta Butovka position, mostly in the evening. No heavy weapons was used. Each attack lasted 30 minutes and more.

In Mariupol sector militants conducted three attacks in Pavlopil, Lebedynske and Shyrokyne. “Each attack lasted about 20 minutes, and the enemy used only small arms,” said Col. Motuzyanyk. The ceasefire held in other areas of the sector.

The spokesman informed that eight trucks set off to the temporarily occupied territoris carrying humanitarian load for civilians from International Red Cross Committee. These are medicine and construction materials. The convoy crossed the demarcation line at Novotroitske checkpoint.

Col. Motuzyanyk informed that a 23-year-old lieutenant Vasyl Tarasiuk (nickname Typhoon) from the 72nd separate mechanized brigade was awarded a title of the Hero of Ukraine in honour of the Independence Day of Ukraine. He distinguished himself in battles for Avdiivka industrial area. A 31-year-old officer Yevhen Loskot from the 1st separate tank brigade was awarded posthumously. “We bow our heads to those who gave lives for our freedom. We express our gratitude to soldiers and officers who have been protecting territorial integrity of our country and keep doing it. We wish Ukrainian people and it’s army to have invincible fighting spirit, happiness, optimism and confidence,” said Col. Motuzyanyk in his greeting on the Independence Day on behalf of the Ministry of Defense of Ukraine.

Report on the military developments as of August 23 is available here. Interactive data on the shelling: chronology shelling chart and the interactive map.