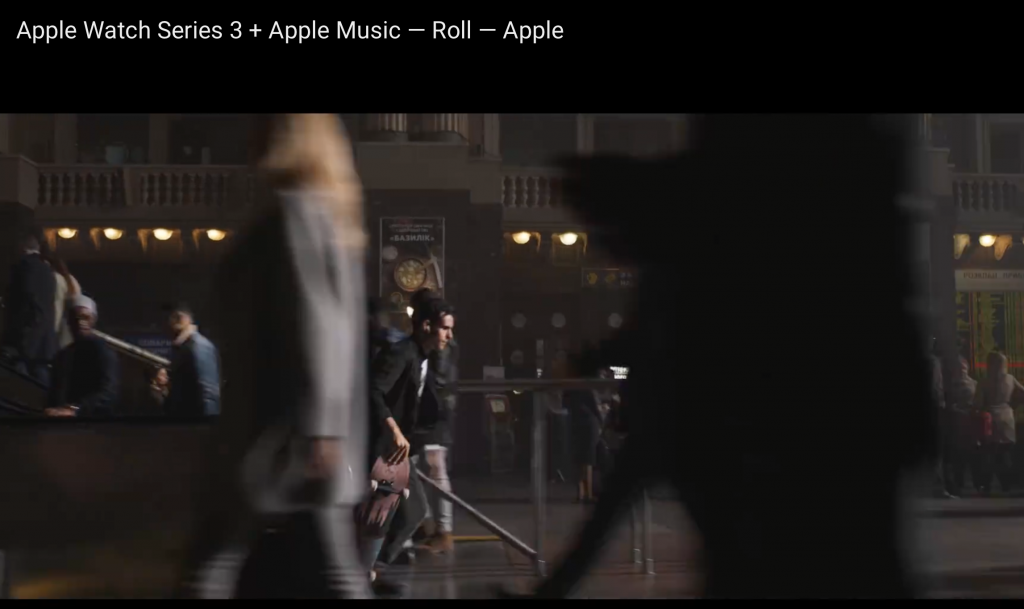 Such Western giants as Apple, Google, Diesel, Mazda and Lacoste take their brands to advertise in the Ukrainian megalopolis, informs Novoye Vremya. UCMC offers you short and translated version of the article.

The emergence of Kyiv locations in the Apple’s commercial during the presentation of their new products in the Californian city of Cupertino on September 12, 2017, became the culmination of the development of the Ukrainian advertising industry.

In the video, well-known Spanish skateboard rider Kilian Martin is dashing along the Kyiv railway station and metro station Zoloti Vorota to advertise a new model of Apple Watch on the background of metropolitan landscapes and surrounded by towns’ people.

The Ukrainian studio Radioaktive Film participated in shooting the commercial for Apple. It was founded in 1998 by three Americans, two of whom are of Ukrainian origin. It became a leader in the local advertising market.

The Ukrainian contractors received this order because they had won the tender of the American advertising agency. In their turn, the agency signed a contract with Apple and were looking for countries where a high-quality and inexpensive video could be shot. Thus, the Americans turned their attention to Ukraine.

Ukrainian advertising productions attract foreigners, above all, by a low price. The cost of commercial filming in Ukraine is usually 4-5 times lower than that in a developed European Union country or the United States.

However, Western brands are not ready to entrust expensive filming to our local specialists. Most often they also bring their operators, while the Ukrainian productions are entrusted with filming organizer functions: logistics, technical equipment provision, crowd shot, accommodation and food. But it should be noted that now more often foreign production studios involve cheaper Ukrainian specialists in local projects, explains Yulian Ulybin, director and founder of the Shoot Group.

Domestic studios are technically ready for the most exquisite foreign orders. There are two big rental houses – Patriot and Illuminator in the local market. They lease everything that is needed to shoot a film – lighting equipment, cameras, etc.

Yulian Ulybin proudly boasts a High Speed ​​Motion Control – a robot that carries a camera at a speed of 6 m/sec and can provide the “frozen water” effect. “Among the former USSR countries, only we have such a robot, the director notes. There are couples of such robots in the EU, so their studios often ask us to film the advertising of food products, because we are cheaper.”

Another advantage of Ukraine is that here they may obtain permission to shoot in locations which would be placed under a taboo in any other country, said Pavlo Vrzhesh from the creative agency Banda.

“In many countries it is prohibited to shoot in the subway, no matter how much money you have paid,” he says. – I cannot imagine that Apple would film the railway station in New York and how much it would cost.”

Natalia Makogon, advisor to the head of the Kyiv Metro, confirmed his words. It is very easy to agree on shooting in the subway. One should only fill out the form on the website and be ready to pay the estimate, which includes charges for electricity, the use of the set of cars and technical staff’s salary.

In the commercials of which brands can we see Ukraine?

The Family Production Studio has recently filmed a commercial in Kyiv for Italian clothing brand Diesel. It gained over 200,000 views on YouTube over two weeks, which is a very good indicator for such content. The commercial was directed by French film specialist Francois Roussel, who shot clips for Rolling Stones, Snoop Dogg and Madonna. Roussel chose the unfinished Podilsko-Voskresenskyi Bridge for filming.

This was also the location for shooting a commercial of Mazda automobile brand in 2016. Popular British racing driver Ben Collins participated in the shooting. The commercial features how he is driving a blinded car on bridge, relying solely on the dashboard indicators and sensors, which prevent the car from falling into the water.

The above-mentioned Radioaktive Studio was involved in shooting the commercial for French clothing brand Lacoste, and before it had worked with Google, Xbox, General Electric and Heineken.

Dmytro Sukhanov, executive producer of Toy Production, which shot advertisements in Ukraine for British telecom operator Virgin Media, Italian automobile brand FIAT and American energy company Chevron explains the attractiveness of Kyiv’s aesthetics. “The global market is interested in Soviet architecture, as well as modern interior things,” he emphasizes. “Our Pirogovo is of no interest for him, it’s just our internal aesthetics. The world needs cosmopolitanism.”