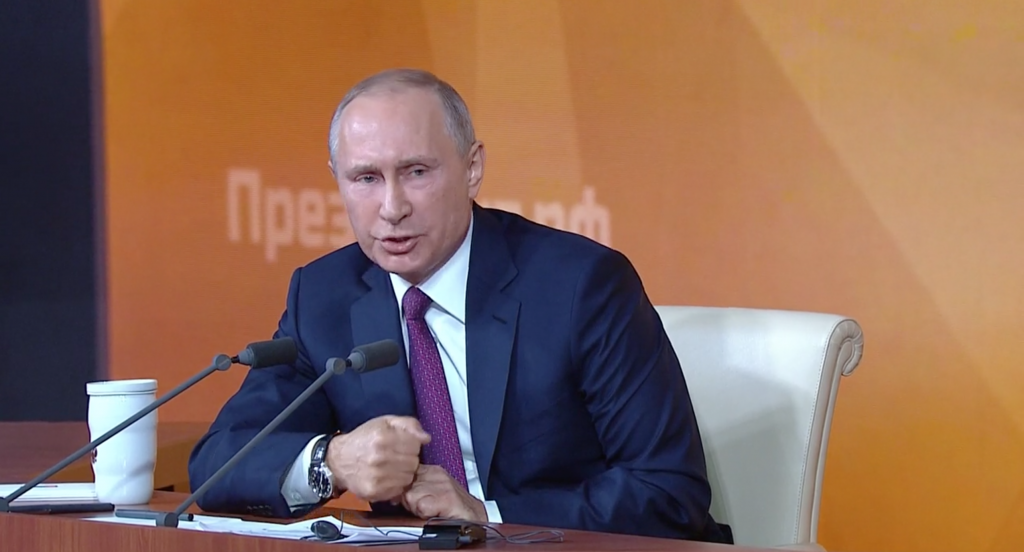 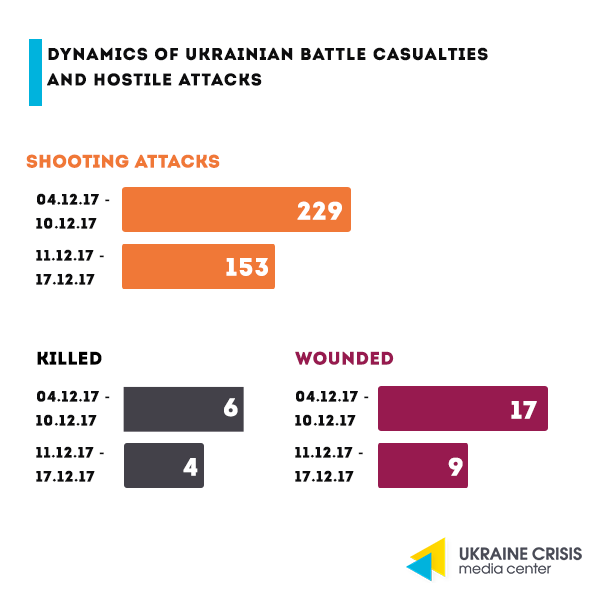 The situation in the combat zone remains tense. Daily attacks result in military and civilian casualties as well as damage to the infrastructure.

OSCE: the biggest number of attacks recorded since March. The intensity of hostilities in eastern Ukraine has drastically escalated. “Last week, we recorded almost 20,000 ceasefire violations, up 25 percent compared with the week before. It was, in fact, the highest number recorded since March,” stated Alexander Hug, Principal Deputy Chief Monitor of the OSCE Special Monitoring Mission to Ukraine, at a press conference via telephone at Ukraine Crisis Media Center.

UN releases new data on the number of casualties. UN Human Rights Monitoring Mission in Ukraine presented its 20th report on the human rights situation in the country. According to the report, since the beginning of the conflict in Donbas, particularly from April 14, 2014, till November 15, 2017, as per the mission’s reporting timeframe, 10,303 persons were killed and 24,778 were injured. The count includes Ukrainian troops, civilians, and militants.

On December 14, leaders of EU member states approved the extension of economic sanctions against Russia for six more months. 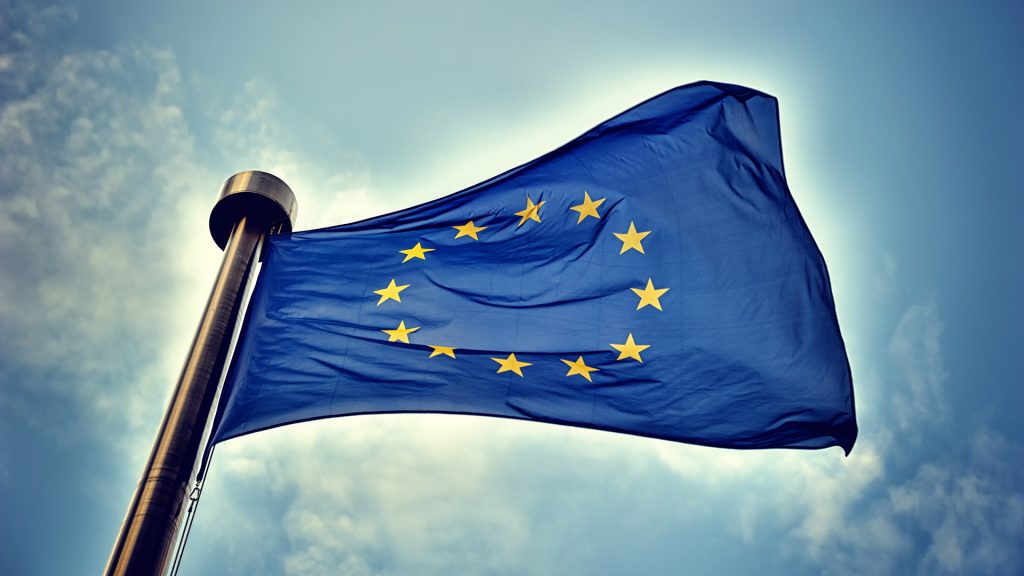 Revision every six months. Economic sanctions against Russia over its aggression in Ukraine were introduced by the European Union in July 2014 for one year. In March 2015, their possible lifting was linked to the implementation of the Minsk agreements by Moscow by the end of 2015. Since then, the EU leaders re-approved extension of sanctions for six more months several times. Last time the European Council extended the sectoral sanctions until January 31, 2018, in June 2017. The restrictive measures concern the Russian financial, energy, and defense sectors as well as the dual-use goods.

Is the EU unanimous? According to the President of the European Council Donald Tusk, at the EU summit in Brussels, the EU leaders approved the extension of sanctions against Russia demonstrating a unanimous position for the first time regarding this matter. At the same time, EUobserver quotes some heads of EU member states and governments thereof saying that “the sanctions cannot last forever” without naming the actual officials.

The formal decision on the extension of the sanctions is expected to come this week.

On December 14, the President of Russia Vladimir Putin held an annual press conference in Moscow.

Russian troops in Donbas. “There is no Russian army in Donbas… We have never stated that there are no people who deal with certain military issues there, but it does not mean that the regular Russian troops are present there, feel the difference”.

Militant army in Donbas. The Kremlin leader stated that “military police groups have been indeed set up in Donbas. They are self-sufficient and are ready to repel any large-scale military attacks against Donbas.”

The US in the Normandy format. Putin nearly for the first time claimed that he does not mind the US officially joining the Donbas negotiations. “The US is actually a full-fledged participant of the (conflict) settlement regardless of whether they are within the framework of the Normandy format or not. They are still deeply involved and are well-informed as to all the developments.”

UN international peacekeeping mission. The Russian President said he does not mind the deployment of the UN peacekeeping mission to Donbas, however, Kyiv needs to negotiate it directly with Donbas, in other words, to recognize the fake republics. “It actually all gets to placing this area under the international control. I am not against it. However. the Kyiv authorities need to negotiate it directly with Donbas.”

2018 elections. Putin will run for the President of the Russian Federation in 2018 as an independent candidate. It is yet unknown who will chair his campaign team. “I will run as an independent candidate. Of course, I count on the support of political forces, whatever they are, the ones that share my vision on the country’s development and trust me. I count on it indeed. I actually count on the wide support from the citizens”.

Opinion polling: what do Ukrainians think of their political elite?

Political leaders. According to an opinion poll conducted by the Razumkov Center, the relative majority of Ukrainians (46 percent) do not see any political leaders able to effectively govern the country. Almost a half of Ukrainians (49 percent) see no political parties or movements which they could entrust the power with. At the same time, 39 percent of Ukrainians admit there is a leader capable of efficiently managing the country, while one third point out political forces which they are ready to entrust the power to.

Interest in politics. According to the opinion poll conducted by the Razumkov Center, 60,3 percent of the interviewed are not much interested in politics or have no interest in it at all (17,2 percent). Only 37,7 percent said they are very much interested in politics (5 percent) or are relatively interested in it (32,7 percent). Two-thirds of Ukrainian citizens (68 percent) see no justification for selling the votes at the elections. Twelve percent can justify it with the poor economic situation, while 13 percent remain indifferent to the matter.

The Razumkov Center held the opinion poll among 2,008 respondents across Ukraine but the occupied territories through September 22-27, 2017.

Ukrainian fact-checking project VoxUkraine presented the first ranking of manipulators and liars in Ukrainian politics. The ranking was formed based on the analysis of 424 statements made by 20 Ukrainian politicians over September-October 2017.

The top three liars in the ranking are Yuliya Tymoshenko, opposition politician Vadym Rabinovych, and the Opposition Bloc leader Yuriy Boiko. Thus, 48 percent of what Yuliya Tymoshenko said within the above period is a manipulation, 26 percent is not true. The project collected 46 factual quotes of Tymoshenko that can be checked. Only four of them – less than 10 percent, did not contain lies or manipulation. 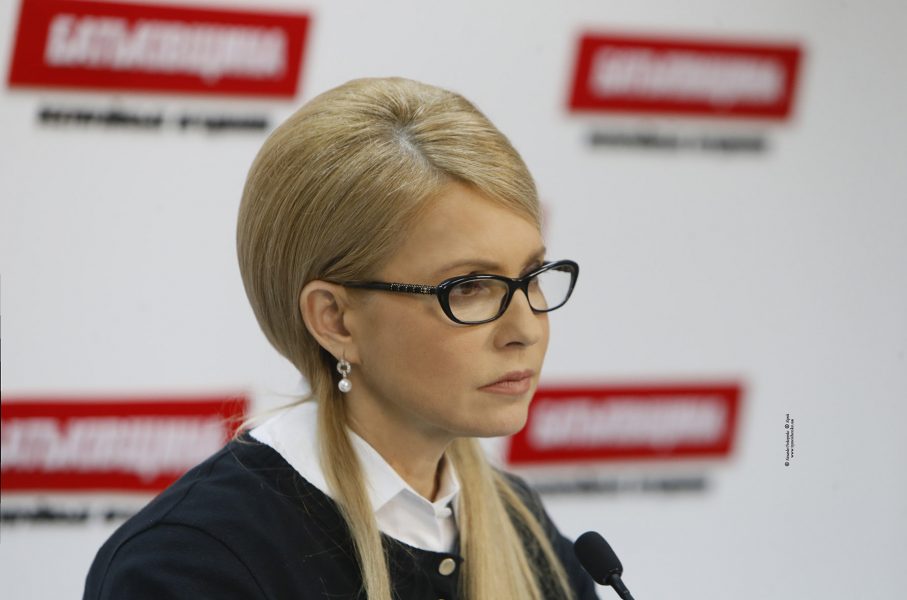 Top three “straight shooters” include Prime Minister Volodymyr Groysman, President Petro Poroshenko, and former head of the Odesa regional state administration Mikheil Saakashvili. It is interesting that the leaders of the ranking, namely Poroshenko and Saakashvili, are in conflict with each other. Seventy-one percent of what is being said by the Prime Minister Groysman is true, 13 percent is exaggerated, 5 percent is not true, and 11 percent is a manipulation. Numbers pertaining to Petro Poroshenko’s adherence to saying the truth are worse: only 69 percent of his statements are true, 20 percent are exaggerations, 7 percent are lies, and 4 percent are manipulation. Mikheil Saakashvili is on the third place with 67 percent of true statements, 25 percent of those exaggerated and 8 percent of lies.