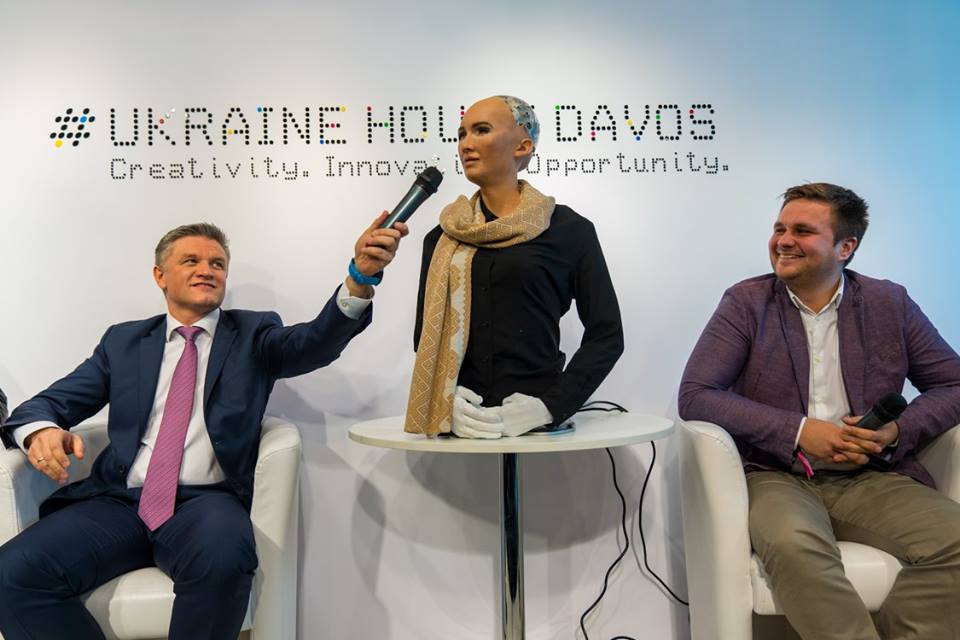 Each year Davos hosts one of the world’s most prestigious international events – the World Economic Forum. The Swiss ski resort turns into a meeting point for representatives of hundreds of countries across the globe – from young businessmen and public actors to the leaders of the key states.

This year in Davos in parallel to the Forum there are two Ukrainian side events that are not directly linked to the World Economic Forum but have still managed to attract the attention of the international community. The first one is the Ukrainian Breakfast that is being organized by the Viktor Pinchuk Foundation and EastOne company since 2005. The second one is the Ukraine House Davos – a space entirely dedicated to technologies and innovation to have opened in Davos for the first time. The Ukraine House Davos hosted an exclusive guest – internationally renowned robot Sophia.

Ukrainian Breakfast: who spoke and who attended? Among the event speakers there were the President of Ukraine Petro Poroshenko, Minister of Foreign Affairs of Canada Chrystia Freeland, First Deputy Managing Director of IMF David Lipton, Chairman of the Munich Security Conference Wolfgang Ischinger, President of Poland (1995-2005) Alexander Kwasniewski, and Secretary General of NATO (2009-2014), Prime Minister of Denmark (2001-2009) Anders Fogh Rasmussen. 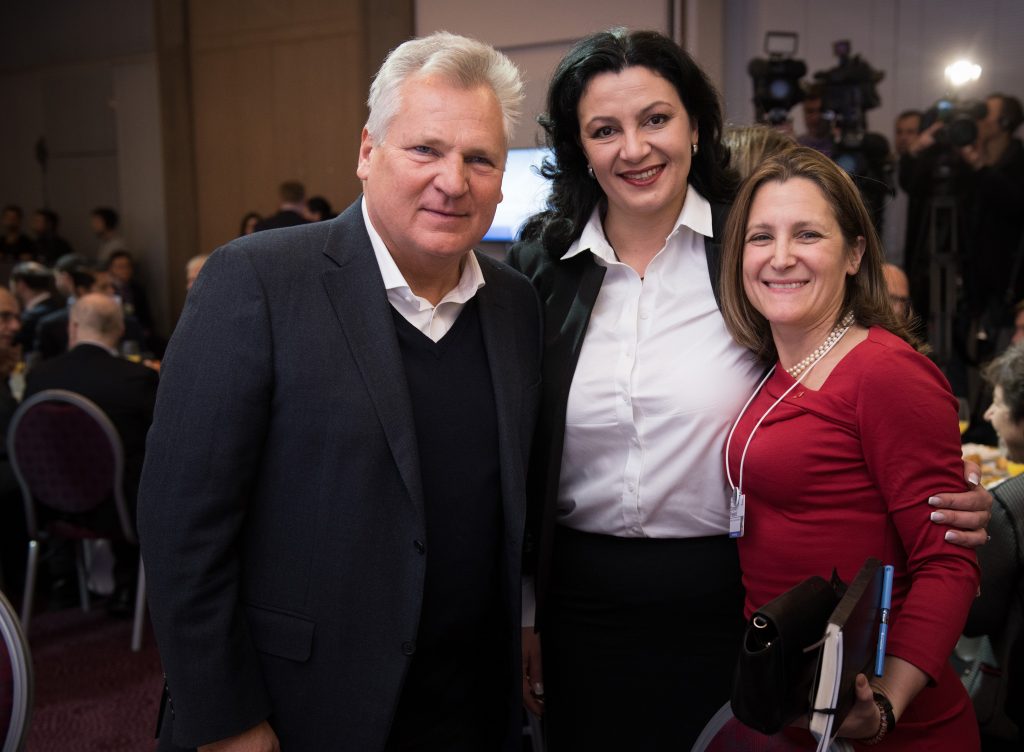 President Poroshenko’s speech. During his address the President of Ukraine Petro Poroshenko called the autumn of 2017 “the most successful autumn of reforms” and the judicial reform “completed”. He also noted the need to continue the work on the draft law on the Anti-Corruption Court to prepare it for the second reading in the Parliament. It was not occasional that the President mentioned the Court. To remind, its setup is one of the conditions Ukraine needs to fulfill in order to continue its cooperation with the International Monetary Fund (IMF) as well as to get the next IMF tranche. Without the IMF money it would be hard for the authorities to maintain macroeconomic stability ahead of the presidential elections. 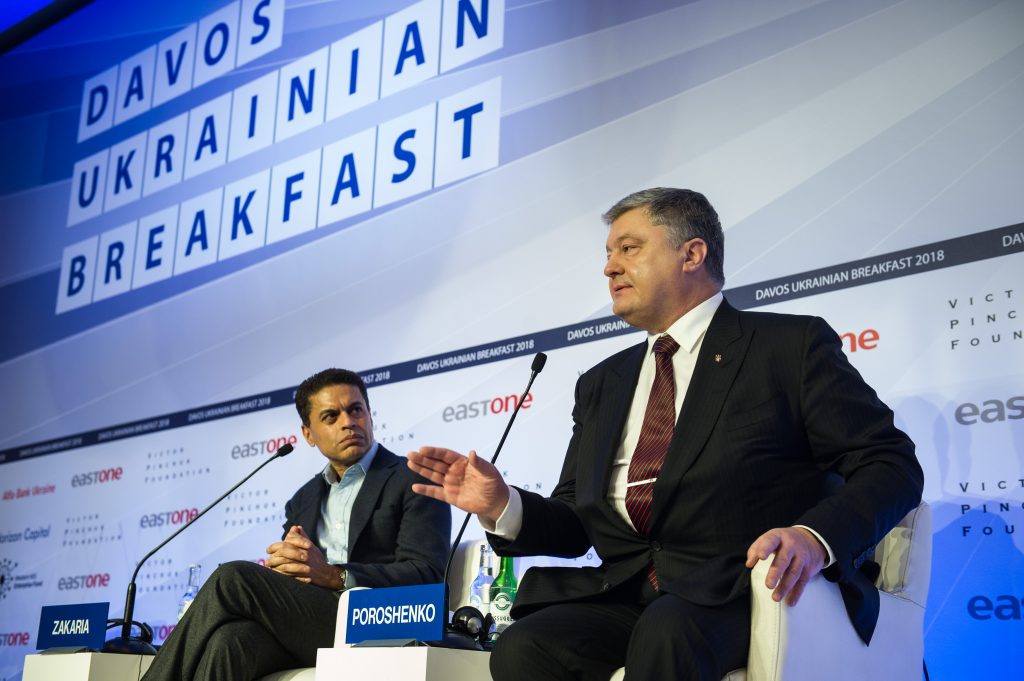 International reaction: calls to carry on the reforms. Minister of Foreign Affairs of Canada Chrystia Freeland reassured that Canada supports Ukraine, its sovereignty and territorial integrity, but also emphasized that the country needs to keep implementing the reforms. First Deputy Managing Director of IMF David Lipton said that over the past three and a half years the country was facing many challenges, however the situation is stabilizing and also “the growth has begun but it is very low and not always sustainable.”

Ukraine House Davos. It is a brand new event format in Davos that is happening for the first time. Its focus is on technologies and innovation as well as on the opportunities for international investors. Over 15 discussion panels and other types of events under the slogan “Ukraine: Creativity. Innovation. Opportunity” were hosted at the location over a week. Forum participants called Ukraine House Davos one of the warmest places at the Forum.

Andriy Kolodiuk, one of the founders of the Ukraine House Davos, said: “The main idea behind the Ukraine House Davos is to present Ukraine to the international community. We focused on the investors and the technology sector as it is what we can present today. Yesterday we had about 300 people registering for each panel, given that the physical capacity of the space is 70-80 people. It not only shows the interest to Ukraine but also to the topics that we are presenting.” 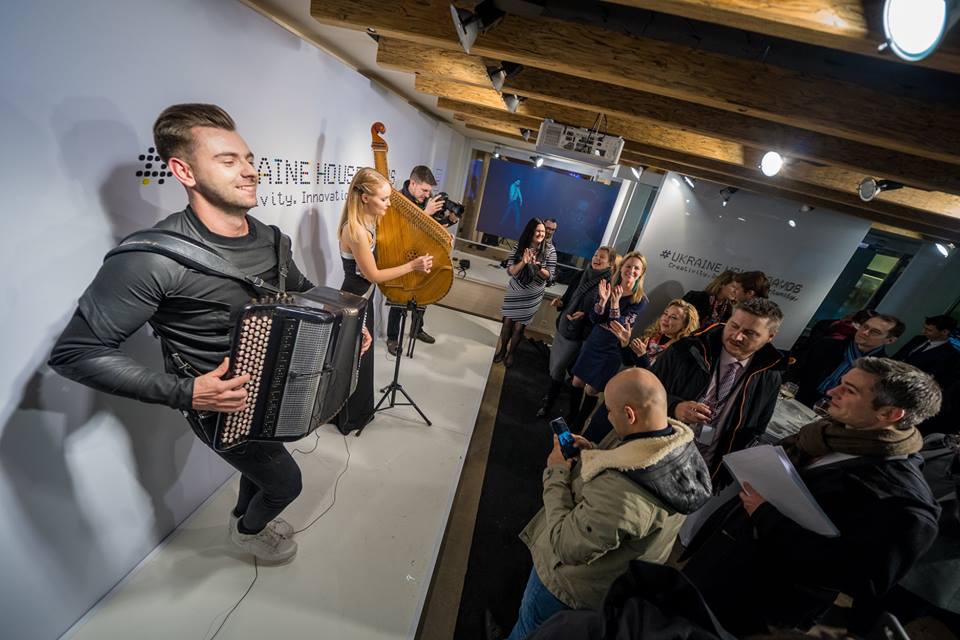 Ukraine House Davos is located opposite the Russia House. A New York Times piece on Davos commented on that: “At times, the tensions of the outside world follow them here. The Ukrainians were chagrined to discover this year that the space they rented at Promenade 73 turned out to be right across the street from Russia House at Promenade 72. Grim jokes ensued about the Russians crossing the road to take over a room in Ukraine House.”

Sophia the robot and the question on corruption. One of the brightest anecdotal stories that the Ukraine House Davos has had turned to be the participation of the internationally renowned robot Sophia that is also the first robot citizen ever in one of the discussions. The discussion was entitled “The Emerging Blockchain Network: How Will It Shape and Secure the Future Finance Architecture?” (the video of the event is available here). According to Ukrainian MP Alyona Skhkrum who was attending the event, the artificial intelligence did not cope with the question on how to overcome corruption in Ukraine. “After the most advanced robot in the world Sophia received a question: ‘how to deal with corruption [in Ukraine]’ her script broke and her processor hung,” the MP said. She then had one of her eyes closed and she remained watching everyone just like that till the end of the panel, other witnesses said.