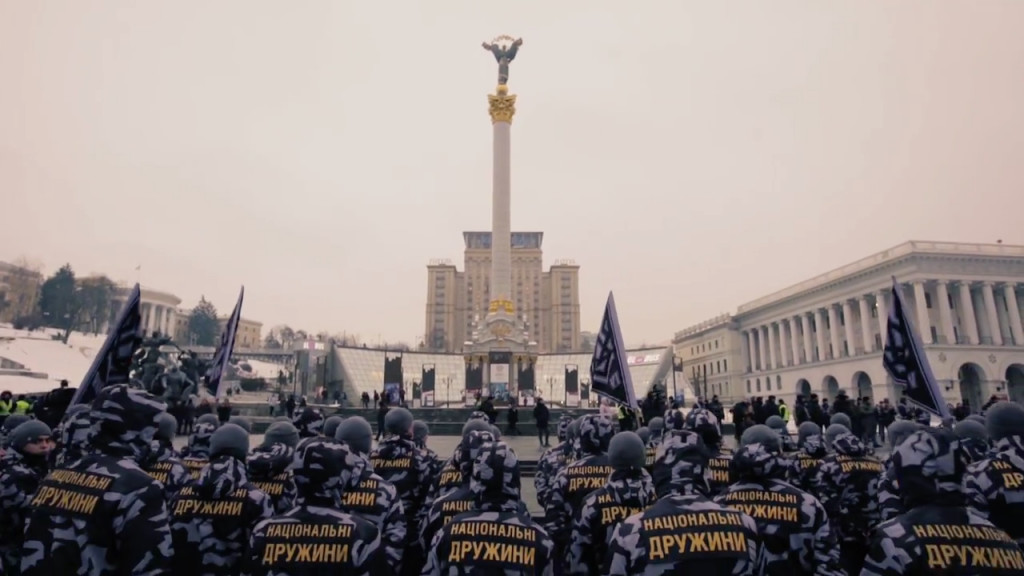 On January 28 a spectacular march took place in Kyiv: young men wearing camouflage uniforms and balaclavas walked through the central streets. When the march ended about 600 members of the NGO “The Natsionalni Druzhyny” (National Militia Units) founded by the veterans of the Azov regiment were sworn in. Many found this scene similar to marches of paramilitary units. It came as a dream picture for the Russian propaganda and for those western media that consider there are risks of the nationalistic retaliation in Ukraine. It also raised a number of questions.

What does the appearance of The Natsionalni Druzhyny on the streets of Ukrainian cities actually mean? Is Ukraine heading towards the paramilitary regime? Has the power been seized by the far-right groups or is the Ministry of Interior unwisely using the far-right forces? UCMC has been following the coverage of the events in local media as well as the reaction of Ukrainians over the last week. We herewith give you the key questions regarding The Natsionalni Druzhyny and answers for them.

How is The Natsionalni Druzhyny linked to the Azov battalion?

The Natsionalni Druzhyny is a project of the so-called Azov-related circle linked to the Azov regiment of the National Guard. Azov regiment was established based on the volunteer battalion Azov that had been taking part in the combat actions in eastern Ukraine since 2014. In 2017, the regiment’s veterans established the political party “National Corps” (Natsionalnyi Korpus) chaired by MP Andriy Biletskyi. Earlier they founded several non-government organizations including “Civic Corps” (Tsyvilnyi Korpus) and “Defense and Reconstruction of the Country” (Zakhyst i rekonstruktsia krayiny, abbreviated ZiRKa). Official founders of the NGO “The Natsionalni Druzhyny” registered in Kyiv are three veterans of the Azov regiment: Ihor Kashka, Artem Klimkin, and Maksym Klymka. Another Azov veteran Ihor Bober is listed as the organization’s head, the regiment’s veteran commander Ihor Mykhailenko is the commander. 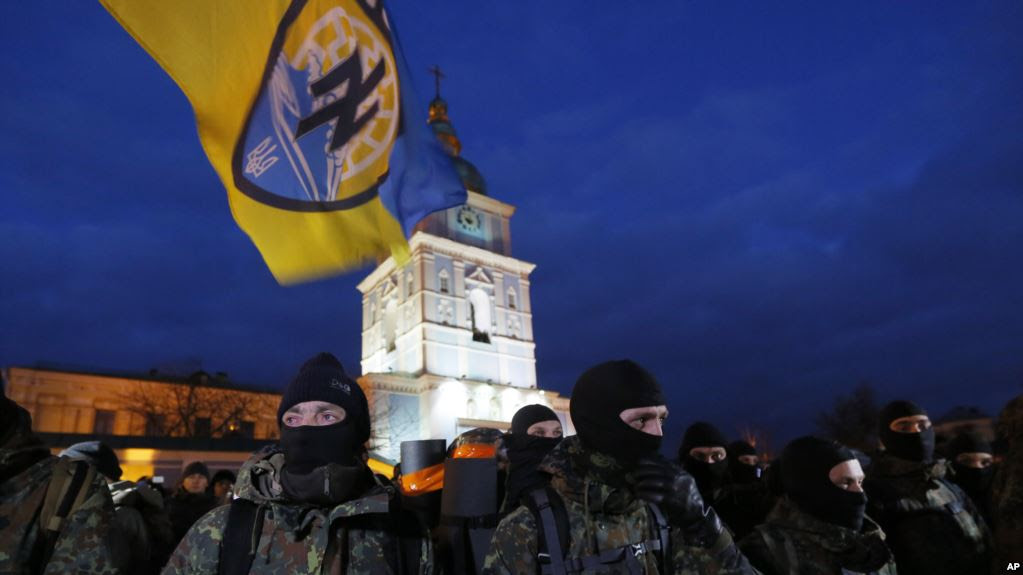 For four years in a row “National Corps” members, as well as Azov regiment combatants, have been labeled supporters of the neo-Nazi ideology, also many point at them for utilizing the runic symbols similar to the symbols used by the Nazi. In the first place, the Azov regiment was founded by members of the far-right organization “Patriot of Ukraine” (Patriot Ukrainy) and football ultras, who often do not hide their far-right views. According to Ihor Mykhailenko, chief of The Natsionalni Druzhyny, many members of the militia units are supporters of the “modern nationalism” ideology that is at the basis of the “National Corps” party. 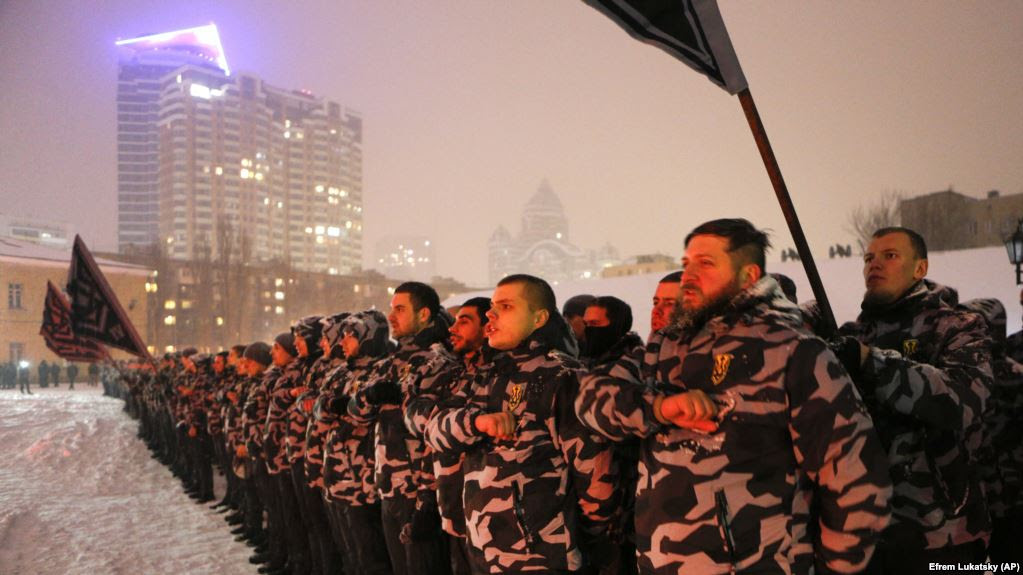 De jure: an NGO or a unit set to maintain public order?

As explained by Ihor Bober, head of The Natsionalni Druzhyny, in Kyiv the units operate under the NGO status while in other cities, for example, in Lutsk or Cherkasy – as a civic unit set to maintain public order. “We are working to have the documents for Kyiv re-registered,” he explained.

Will they be patrolling the streets of the capital?

Head of the department for interaction with the law enforcement and municipal security of the Kyiv City State Administration Oleh Kuyavskyi said that the city authorities had not received any respective documents from The Natsionalni Druzhyny. Head of the Kyiv patrol police department Yuriy Zozulia said that Kyiv policemen are not jointly patrolling the streets with any civic group. “My position is: if you want to protect the public order – go serve with the police,” the police chief said. “We met with them to realize that they are interested rather in spreading the information about themselves than in patrolling the streets together with policemen,” Zozulia said.

This question is of concern to many who watch the story unfolding, and the concerns are not groundless. Hromadske Radio counted that in order to procure the coats for one thousand persons across Ukraine one would need over UAH 1,7 million (approx. EUR 50 thousand). Expenses get even bigger if the cost of fleece hats is also counted. Members of The Natsionalni Druzhyny reassure that the organization exists thanks to the membership donations. Responding to the journalists’ questions Ihor Mykhailenko said: “There is no fixed sum for a donation. Everyone brings as much as they want.” However, earlier Roman Chernyshov, spokesperson of the political party “National Corps” that actually organized the ceremony where 600 militia unit members were sworn in on January 28, told Hromadske Radio in a comment that The Natsionalni Druzhyny is financed by Ukrainian businesses without naming particular companies or entrepreneurs. At the same time, leaders of The Natsionalni Druzhyny say it is not true. “I guess it is unlikely that he could have said that The Natsionalni Druzhyny is being financed by representatives of the business. It is not true,” the commander of The Natsionalni Druzhyny said.

Are The Natsionalni Druzhyny “the army” of the Interior Minister Arsen Avakov?

There is a widespread opinion that The Natsionalni Druzhyny may be a “private army” of the Minister of Internal Affairs Arsen Avakov. At the same time, both Avakov and the units’ representatives disprove it publicly. “There is only one monopoly on enforcing the law – it’s the National Guard, the National Police and the Ukrainian Armed Forces. All other paramilitary groups trying to establish themselves in the streets are not legal,” Avakov said. “As the minister, I will not allow any parallel structures to establish themselves in the streets as alternative military groups,” the Minister added. “Neither Avakov, nor Poroshenko or any other agency has any moral authority for us. They are the authorities that missed out their chance,” said Ihor Mykhailenko, head of The Natsionalni Druzhyny.

Does the setup of The Natsionalni Druzhyny violate the law?

The Law “On participation of citizens in securing public order and the state border” repeatedly quoted by the leaders of The Natsionalni Druzhyny foresees the possibility to engage representatives of civic groups in patrolling of the streets but exclusively jointly with the National police staff. Representatives of The Natsionalni Druzhyny actually interpret the provisions of the law quite freely. Thus, at the press-conference of January 31 in Kyiv Ihor Mykhailenko did not deny the fact that there are minors among the organization’s members. “These are 17-year old guys who already graduated from school. I don’t see anything wrong with it,” he said. The Law currently stipulates that only persons of age can be members of such civic groups. The Law also prohibits the use of cold weapons or firearms by the civic group members. However, the application form to The Natsionalni Druzhyny asks if the applicant is in possession of registered weapons.

A successful PR move for a political party?

Ministry of Interior spokesperson Artem Shevchenko claims that the appearance of The Natsionalni Druzhyny is a “quite successful PR move on their side, a staged trick and nothing more than that.”

He added that he is not sure whether The Natsionalni Druzhyny is registered as a group that can safeguard public order in accordance with the law. “It is the journalists’ job to find out if they are what they pretend to be or they are just bluffing by shooting beautiful videos and thus making themselves being mentioned on the main TV channels without actually paying for the advertising. Any NGO that is legally registered and is registered with the regional offices of the Ministry of Justice as a civic group for the safeguarding of the public order or the state border, can actually be doing it.”

Vox populi: the reaction of the Ukrainian society.

The most widespread reaction of Ukrainians is open concern and mistrust.
“The biggest concern as to the activities of The Natsionalni Druzhyny is with the ideology of the political force to which this NGO is linked. It is of totalitarian and anti-democratic nature,” such an opinion was expressed by human rights defender Vyacheslav Likhachov.

Human rights defender Maksym Butkevych adds: “In its time the Social-National Party of Ukraine was also emphasizing the ‘ability to establish the order’ as well as the brutal militarization. It then quickly reached its climax and started declining, until it was skillfully rebranded into the All-Ukrainian Union “Svoboda” (Liberty). It turned out that not so many people like the ordnung – its version presented by the self-proclaimed racially conscious ‘patriots’. However, back then it was not linked so much to one of the units of the National Guard and was not being covered by the leadership of the Ministry of Interior, neither it was a full-fledged paramilitary organization.”

Yekaterina Makarevich, a Russian journalist who immigrated to Ukraine from the Russian Federation and is analyzing the Ukrainian society after the Revolution of Dignity, wrote on her Facebook page: “It’s the first time I was scared in the two years that I live in Ukraine… Firstly, it looks like Nazism in its entire disciplined ‘magnificence’. Ukraine has always been known for being diverse, that’s the charm of the Ukrainian atmosphere. Secondly, it is impossible to establish the order by force without removing the freedom.”

Some experts are trying to understand the logic of the events in the appearance of The Natsionalni Druzhyny. Yaroslav Yurchyshyn, chief executive director of Transparency International Ukraine, wrote on Facebook: “As to The Natsionalni Druzhyny, municipal patrols, and other paramilitary groups. There is no vacuum of functions. If the state is unable to provide the monopoly for the use of force to protect its citizens, someone else will do it. It is neither negative nor positive, it is a reality. (…) Ukrainians have long been known for establishing the structures that were parallel to the authorities. In times of external governance, it used to save us. When we do have our own state, it may have a different outcome.”

The Natsionalni Druzhyny as a new “business card of Yarosh”?

Finally, a considerable part of the Ukrainian society reacted to the appearance of The Natsionalni Druzhyny with a laughter and irony. Social media users compare the actual threat of The Natsionalni Druzhyny with that of the “business card of Yarosh” back in 2014 – an exaggeration. Besides, in Ukrainian “druzhyna” also means “wife”, so various funny pictures started being shared on social media in regard to “national wives” (like the one below).