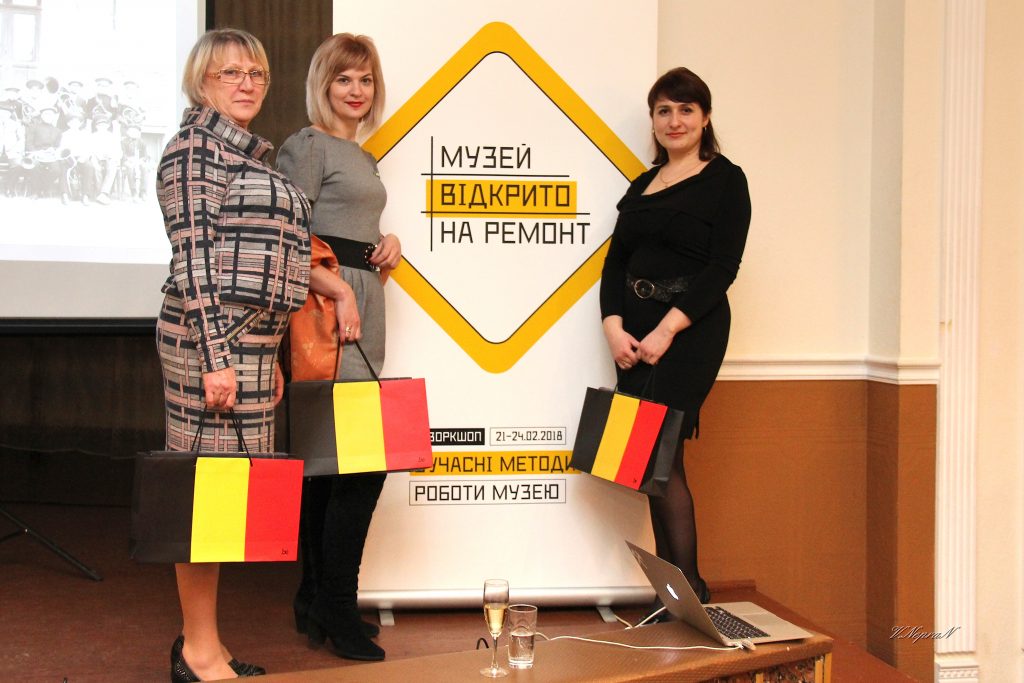 Between February 21-24 Sievierodonetsk hosted the workshop “Modern methods of museum work” for museum workers of Luhansk and Donetsk region. This workshop has taken place within the project Rediscovering the historical heritage of eastern Ukraine – “Under construction: Museum open II”. The project is organized by the Arts Department of Ukraine Crisis Media Center with the financial support of “Ukraine Confidence Building Initiative” (UCBI II), funded by the United States Agency for International Development (USAID).

More than 50 representatives of Donbas museums gathered in order to discuss the results of a 21-day expedition to 31 museums in Donetsk and Luhansk region for, the project “Yellow Line” and curatorial exhibitions in four Donbas museums. During four days, there was a huge amount of lectures, discussions on the modernization of methods and formats of museums work by leading experts in museum affairs.

Gordon Filewych, an expert in museum affairs and the main designer of the Canadian National Gallery exposition, conducted a three-day crash course about the experience of the reorganization of the Canadian museums of Canada. According to Gordon, he was impressed the most by the enthusiasm of the participants and their passion for working with collections and museum exhibits: “They feel themselves an important part of the community and realize their own role. They are proud of their culture and history. It is very inspiring. If my experience can be useful, then I am interested in further cooperation with museums”.

One of the important events of the workshop program was a tour to the Belgian architectural heritage of Lysychansk – the buildings of the “Lubimoff, Solvay and Cie” soda factory.

The presentation of the book on the study of the architectural heritage of Belgium in Ukraine: “Steel in the steppe. View from Ukraine” has also taken place. The presentation was attended by Luс Jacobs, Ambassador Extraordinary and Plenipotentiary of the Kingdom of Belgium to Ukraine. The author of the book is Valentyna Lazebnik, head of the department of research on the history of Ukraine of Dmytro Yavornytsky National Historical Museum of Dnipro. During the presentation, the Belgian Ambassador to Ukraine announced that Lysychansk had been awarded the Prize of the “Belgian Heritage Abroad Award 2017” which is held annually by the King of Belgium Foundation. The new title of architectural heritage envisages attracting additional attention to the preservation and restoration of buildings (currently only two museums have the status of a monument of architecture). It also stimulates the research into the Belgian contribution to the industrialization of Lysychansk and Donbas in general.

Moreover, since 2016 the presentation of the exhibition “Foreign investment in Ukraine in late XIX – early XX century. Part one: Belgium” has taken place in museums of Donetsk and Lugansk regions, in Vinnytsia, Kyiv, at the Belgium-Ukraine Business Forum and on the Belgium King’s Day. The exhibition was created by Arts Department of Ukraine Crisis Media Center in cooperation with Dmytro Yavornytsky National Historical Museum of Dnipro and with the support of the Belgian Embassy to Ukraine.

The continuation of the project was the presentation of an exhibition about investments of French entrepreneurs within the UCMC project “Cultural Diplomacy between the Regions of Ukraine” in Kyiv and Kramatorsk. The presentation was under the patronage of Ivanna Klympush-Tsintsadze, Vice Prime Minister for European and Euro-Atlantic Integration of Ukraine.

Oleksiy Bykov, architect and modernism researcher presented the results of the project “Yellow Line” and described the current state of monuments of modernism in the Donetsk and Lugansk region, for example, architecture and mosaics. He is pleased with the results of the project and already has further plans: “I would like to continue my work, first of all, to create a documentary video film about Sievierodonetsk and the architectural landscape of the city”.

Eugenia Molyar, art historian, coordinator of the art program “Under construction: Museum open” is pleased with four curatorial exhibitions opened in late February. However, she thinks that it is too early to talk about the results: “Now it is important to comprehend and publicize what they did. We understand that for the vast majority of viewers, these exhibitions will be available in the documentation format because it is very difficult to get to the museums. Therefore, we work actively on publications and hope that they will inspire someone to make a tour around the museums. We also monitor the attendance of museums, the reaction of viewers to the statements of artists. It is very important for us, how this interaction happens”. As Eugenia said, all exhibitions are very productive and important: “We tried to cover as much as possible a range of topical issues in the museums of this region. We came to their decisions from different directions. For example, the exhibition “Pryadka, Shablya I Olen’” (“Spinning wheel, sabre and deer”) in Stanytsia Luhanska was created from museum funds. “Afforest” at Velykoanadolsk Forest Museum and “Casus” in the Prokofiev Memorial Museum – various statements, united by common themes, exhibition “Poshuk” (“Search”)  in Bilovodsk – united by a medium”.

Olha Honchar, director of the Territory of Terror Museum, shared her own experience in managing the museum, from theoretical tasks to their practical implementation. She told also about the achievements of the museum and about the first impressions after six months of her management. At the same time, Olha, as the PR coordinator of the project “Under construction: Museum open II” noted changes in the workshop participants: “When a community of people with the same values and goals (to make museums better) unites – a productive cooperation and an exchange of ideas takes place. During the first workshop in 2017, we just met each other and started working together. After a year, we have our own joint history of projects and impressions. We will happily invite colleagues to visit the “Museum of Terror”. We have already planned to exchange materials and some exhibits”.

Olha Vieru, chairman of the board of the Charitable Foundation “Mystetskyi Arsenal”, shared experience of organization of the charitable foundation in state institutions. She told about the educational project “Arsenal of Ideas” in the National Cultural-Art Museum Complex “Mystetskyi Arsenal”. Olha Vieru said, “the museum area in Ukraine is largely based on the enthusiasm and commitment of the staff, which, despite all difficulties, focus on the main functions of the museum – the storage and replenishment of museum collections. The realization of educational functions and functions of social partnership with local communities is a new challenge for many museums. For its realization they need more than just one step”. Olga noted that during the meeting with the workshop participants who were very sincerely interested in perceiving any constructive and practically useful information for them, it was obvious that for this audience, such an exchange of experience is particularly necessary and stimulating. The program of the project “Under construction: Museum open II” is created strategically very well, because it is not a single meeting that can leave a sense of discontinuity and awareness of the insufficiency of its own capabilities. The system work makes the program participants take part the progressive processes that they discuss during meetings. The participation of contemporary artists in the program is also very important. We realized how proud and grateful were the responses of local museum workers to collaborate with well-known Ukrainian artists”.

Kateryna Makarova, project manager of the Charitable Foundation “Mystetskyi Arsenal”, shared the experience of organizing an educational project for children and youth “SPARK!LAB”. “The organizers of the project “Under construction: Museum open” gathered wonderful people and created an extraordinary atmosphere in which you want to create and make the world a better place. The most important issue is that you begin to understand the importance of your own role in these changes. It was nice to see that after long-term work on themselves and the museums where participants work, their willingness for changes is clear. They are open to new, unusual projects, to dialogue and cooperation. We could see it right after our training. The participants talked about the new ideas they want to implement, about their museums, they were even showing plans for the premises and advising how better to implement their plans”, said Kateryna Markova.

Leonid Marushchak, project manager “Under construction: Museum open”, told about the experience of the expedition to 31 museums in Donetsk and Luhansk region during 21 days, about his own and team impressions from communicating with museums. He also summed up the results of the workshop: “To say that I am impressed is not to say anything, 55 participants attended when we planned for only 40. There were seven speakers instead of one! They worked from 8:00 to 21:00 without any complaints – only motivation. It is too early to talk about the next steps. It takes some time for reflections. The most important issue – we must see the work of the museums themselves, which will be aimed at continuing”.

Follow the news of project on social media by the hashtags #музейвідкритонаремонт #UCBI #UCMC #USAID and on the page “Cultural Diplomacy Between the Regions”.