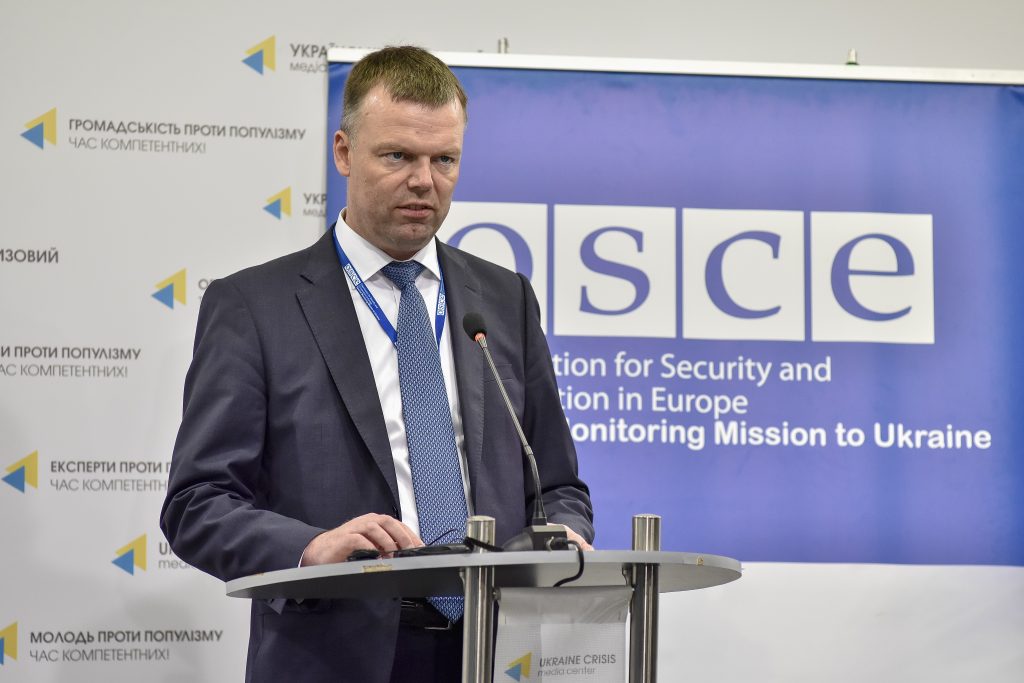 For the month of May, we recorded approximately 28,000 ceasefire violations.

At least 2,248 of them were caused by weapons that should have been withdrawn in accordance with the Minsk agreements.

As you may expect – given the use of these weapons – last month we registered the presence of 430 weapons that should have been withdrawn; as agreed by the sides in Minsk.

When we refer to heavy weapons proscribed by the Minsk agreements, often we are talking about high-caliber weapons of large-scale destruction; weapons that have a wide-area impact that should under no circumstances ever be used in built-up urban areas; weapons such as multiple launch rocket systems.

The typical Grad multiple launch rocket system is capable of firing unguided salvos of up to 40 rockets with over 3,000 fragments per rocket, which land anywhere within a rectangle of 54,000 square metres. Anyone – civilians included – close to these fragments can be killed or injured.

We also note other violations of the Minsk agreements and associated accords.

Everywhere we see mines; all along the contact line, there are thousands of these indiscriminate weapons – seen and unseen.

We saw some of them close to government-controlled Travneve on 30 May.

And we saw them near non-government-controlled Obozne on 3 June.

Not only are the sides not demining, they are in fact laying more mines.

We saw this happen in a government-controlled area, inside the Zolote disengagement area on 5 June.

And in a non-government-controlled area near the Maiorsk entry-exit checkpoint on 2 June.

And we observed other violations.

Disengagement – which had until recently been at least partially implemented in a number of pilot areas – is clearly now disregarded.

In fact, instead of disengaging, we see evidence of further engagement in other places along the contact line.

Along with some colleagues from the OSCE Special Monitoring Mission, I was in the Chyhari neighbourhood of Pivdenne yesterday.

Clearly certain people were determined not to allow us to see what is happening there.

On initially entering the area, two single shots rang out, followed by a burst of small-arms fire, less than 100 metres from a number of my colleagues which were assessed as warning shots accompanied by shouting from the distance that we should not move further. All despite the fact that the sides had provided explicit security guarantees to allow for monitoring in the area.

We returned to the area, however, and established a number of important facts.

The Ukrainian Armed Forces are present in Chyhari. We observed this.

There has been intense fighting in the area, evidenced by the fact that there are numerous houses totally destroyed; burnt to the ground.

As the soldiers move in – and as violence intensifies – civilians are moving out.

In a visit to the area in February, we estimated about 150 people lived there.

Most have fled to either Horlivka or Toretsk, where we also spoke to the now internally displaced persons.

In Chyhari yesterday we met one IDP, returning to the village in order to retrieve some belongings.

What he discovered is not an uncommon story.

Almost nothing remained of his home – just a smouldering heap of rubble; a lifetime’s work up in flames.

Among his possessions lost was a book collection – over a thousand books collected over his life-time.

Wisdom, learning, truth and progress forcefully set aside for – incinerated in fact by extremism, intransigence and violence.

In February Chyhari was tense but intact. Violence had not descended on the area. Homes were standing and residents could sleep in their beds at night. Only civilians were present in the area.

Now it is a different reality. There are soldiers and weapons. There is violence, destruction, fear. A whole community largely uprooted. The few remaining people sleeping under their beds. Homes destroyed. A largely militarised ghost town.

Yesterday we took a number of photographs, which alongside some taken in February, give some sense of what has become of a once largely peaceful community.

They speak for themselves.

With a volatile security situation, civilians inevitably get hurt; in more ways than one.

The worsening security situation in May did in fact result in 43 confirmed civilian casualties – 11 deaths and 32 injuries.

Other cases are pending, and so we expect the number of confirmed civilian casualties to rise.

The worsening security situation – or more precisely, the insecurity maintained and fostered by the sides – is particularly evident in the areas in and around the Donetsk Filtration Station.

Last week we did in fact record about 600 ceasefire violations in a 15 kilometre radius around the facility.

This level of insecurity has the potential to impact on the lives of over 300,000 people who depend on the plant for drinking water.

Already the impact has been felt.

The threats posed by these ceasefire violations and the continued presence of explosive devices on access roads around the facility have led the OSCE SMM to suspend its enhanced presence at the facility.

These threats have also meant the women and men operating the plant are no longer able to get to work.

They have been shot at – in one instance in April, five of them were injured.

Every day – as they work to provide drinking water – bullets and bombs have rained down around their work place.

They have done more than anyone could ask.

The unarmed civilian monitoring officers from the OSCE SMM have played their part, too.

They too have fulfilled their obligations.

They too have worked hard – enduring the same dangers – to keep the plant open.

The only ones that have not fulfilled their obligations – the only ones who have repeatedly failed to keep their promises – are the sides.

Over 600 ceasefire violations in and around the facility last week.

Over 600 times they have failed to fulfil their obligations.

Over 600 times they have not kept their promises.

The consequences will be borne by over 300,000 civilians on both sides of the contact line.

But the responsibility rests squarely with the sides.

For every cause, there is an effect; and with this insecurity, I hate to think what the ultimate impact will be.

The dominoes are falling.

Insecurity is a natural state, what some refer to as a state of nature.

It requires adherence to agreed measures.

It requires above all that those who agreed to take the necessary measures to create a secure environment ensure those measures are carried out.

There is nothing complicated here.

Remove the causes of insecurity – the weapons and personnel – and stop firing.