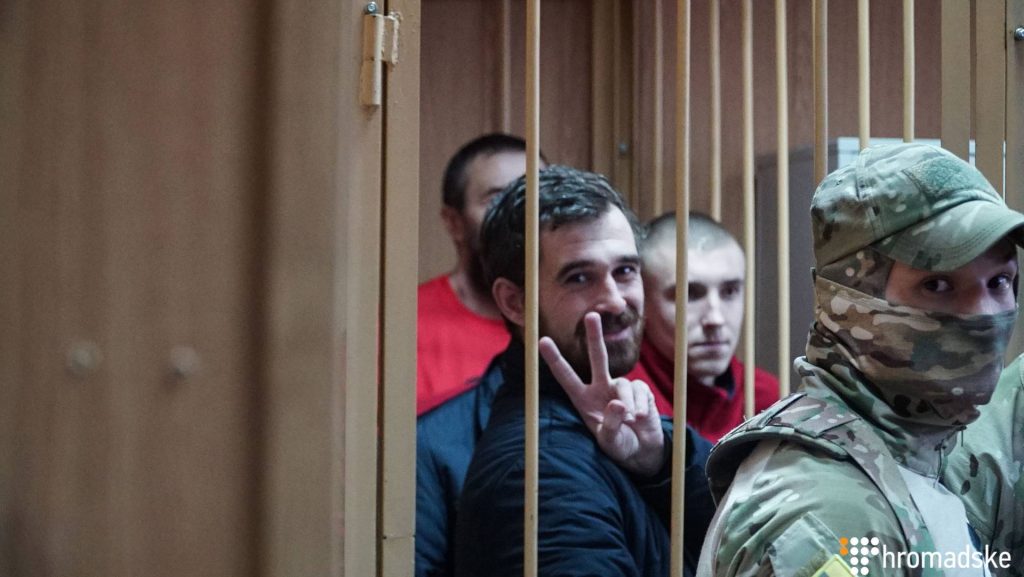 Russia has been illegally holding in custody Ukrainian sailors captured near the Azov Sea on November 25, 2018. Back then two Ukrainian ships and a tugboat started from the port of Odesa headed to Mariupol. On their way, near the Kerch Strait a Russian vessel rammed the Ukrainian tugboat, later Russian ships fired upon and seized the Ukrainian vessels. A total of 24 Ukrainian servicemen were on board of the three ships, two of them were staff members of Ukraine’s Security Service. Three sailors were wounded. All Ukrainians were arrested for two months. They were charged with the illegal border crossing of the Russian Federation in the Black Sea. On November 29 the Ukrainians were taken to Moscow. On January 16, 2019 a court sitting took place in Moscow, the court ruled to extend the arrest until April. UCMC takes a look at how the trial went, what the defense position is and what steps the international community is making.

On January 16, 2019 the Lefortovo court of Moscow extended the pre-trial detention term to all the 24 Ukrainian sailors captured by Russia in the Kerch Strait on November 25. The sailors will stay in custody until April 24 awaiting the trial, the wounded ones – until April 26. Ahead of the court hearing the sailors’ relatives arrived in Moscow, but the Federal Security Service of the Russian Federation (FSB) did not allow them to meet the prisoners.

Defense position: why the trial is illegal

Ukrainian lawyers as well as the Office of the Prosecutor of the Autonomous Republic of Crimea (based out on mainland Ukraine) emphasize that the captured Ukrainians have the status of prisoners of war, meaning that holding them criminally liable and choosing them pretrial measures is illegal. Ukraine’s Foreign Affairs Ministry stands on the same position claiming that the captured Ukrainian sailors are prisoners of war and thus cannot be tried, held in pretrial detention centers or swapped as political prisoners.

According to the defense lawyers the “criminal case” regards the Ukrainians not as military but as civilians. The prosecution does not consider them war prisoners, the criminal case suggests that civilians allegedly crossed the border illegally.

Already back in late December 2018 all the 24 Ukrainian sailors captured by Russia stated to the prosecution that they are prisoners of war, said Nikolay Polozov, coordinator of the defense lawyers’ group.

Position of the prosecution

TheLefortovo court of Moscow refused to pass to the military court consideration of the motion to extend the arrest of the Ukrainian sailors detained near the Kerch Strait.

The President of the Russian Federation Vladimir Putin said exchange of the Ukrainian sailors can be considered after the criminal case comes to an end.

Moreover, the Lefortovo court split the sailors into several groups so that the decision to extend the arrest is made on the same day. The court sitting was held behind the closed doors. Nevertheless the lawyers of the Ukrainian sailors insisted that the court hearings stay open. They particularly insisted that media, the Ukrainian Obduswoman Lyudmyla Denisova and relatives of the prisoners were present.

Ukraine’s Foreign Affairs Ministry expressed a protest to the decision of the Russian court to extend the arrest to 24 Ukrainian sailors detained by Russia near the Kerch Strait.

“’The closed regime’ of today’s court hearing demonstrates that the Kremlin is fully conscious of the illegality of this judicial farce,” the Ministry said. The Foreign Affairs Ministry also emphasized that the trial of the sailors is in violation of the international humanitarian law.

The Ministry called on Russia to treat the Ukrainian prisoners of war in accordance with their status. The Ministry also demands that medical conclusions as to the health state of the wounded sailors are presented.

The Moscow court hearing of the Ukrainian sailors’ case was attended by diplomats from Latvia, Poland, the Czech Republic, Sweden, Denmark, the US and the UK. International partners expressed their solidarity with the sailors and demanded their immediate release.

The defense lawyers have three days to file an appeal. They say they will appeal regarding all the sailors. However there’s little hope that it will change the decision.