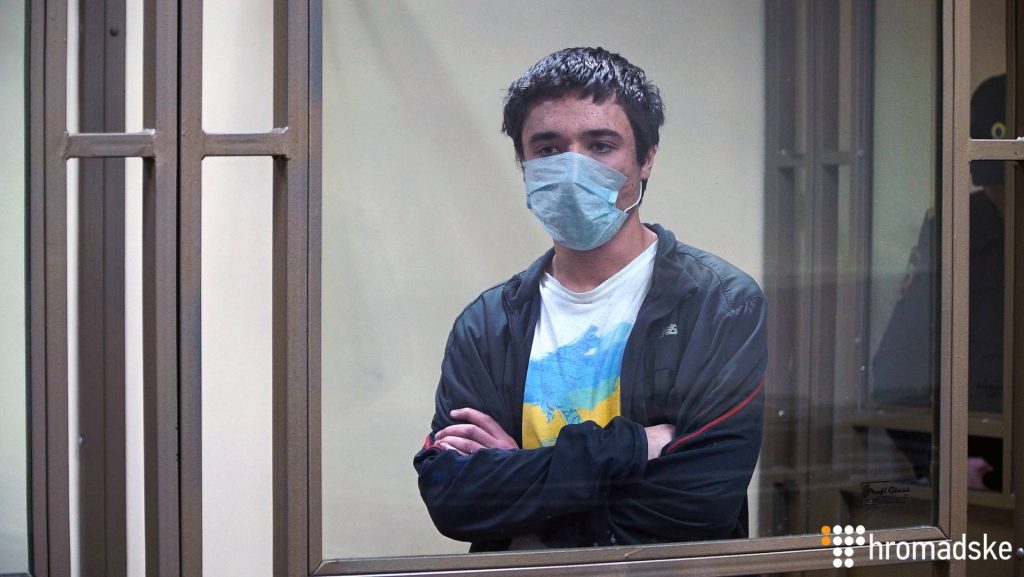 On March 22 a court in Russia’s Rostov-on-Don sentenced Ukrainian political prisoner Pavlo Hryb to six years in prison. The Federal Security Service of the Russian Federation arrested him in 2017 when he was 19. Hryb came to Belarus to see the girl he met on social media. UCMC takes a look at the case.

What Hryb said in his last word in court. “It is for the first time that I get a chance to speak. Here is my last word, I’d like to finally tell how it all actually happened,” Pavlo Hryb said.

In his last word the Ukrainian prisoner pled not guilty and called the Federal Security Service (FSB) “bandits and assassins”. He also said that he “could not imagine” that the third-party Belarus is “actually dangerous”.

Pavlo wished to all the Ukrainian patriots to go through the captivity with dignity – “consciously and with truth at heart”. He ended his speech with “Glory to Ukraine!” and “Glory to the Ukrainian nation!”, journalists reported.

The sentence. Pavlo Hryb was charged with inclining the Russian citizen Tetyana Yershova to engage in a terrorist act. The court found him guilty and sentenced to six years in prison. Pavlo is 20 years old now. After the sentence was announced Hryb said he goes on hunger strike. “As no doctors were allowed, neither was Denisova (the Ukrainian Ombudsman), and from what’s going on in general, I go on hunger strike,” Hryb said.

What we know about the arrest and charges. On August 28, 2017 the father of Pavlo Hryb reported his son was arrested. He said on August 24 the 19-year-old Ukrainian went to Gomel, Belarus, to meet Tatiana Yershova, the girl he met and was talking to on social media. The girl was supposed to come from Russia. Pavlo Hryb is convinced that between June and August under Yershova’s account Russian law enforcement staff was talking to him. On September 7 it became known that Hryb is being held in a pretrial detention center in Krasnodar, Russia. Russian prosecution charged him with alleged preparation of the terrorist act on the first day of school event in Sochi.

Why him? Human rights defenders immediately said that Pavlo’s story is strange. Why was he arrested? Pavlo used to be a student like many others, he was a first year student at the Kyiv-Mohyla Academy. According to his father Ihor Hryb (a former border guard officer currently establishing the chaplain service in the law enforcement), Pavlo was actively speaking on social media against Russia’s aggression in Ukraine and “often did not care too much to choose words”. His father is convinced that it became the reason why the FSB opened a case against his son. Pavlo did not take part in the war in Donbas, neither was he drafted to the army. Pavlo has a disability, according to his father he must be taking medicine regularly, otherwise he can die.

Between life and death. Pavlo has a congenital disease – portal hypertension, he requires daily treatment. Russian authorities do not let Ukrainian doctors visit or examine the Ukrainian at the pretrial detention center. On December 22 Hryb’s lawyer Dubrovina said Pavlo’s health keeps deteriorating, the young man had almost lost his sight and his memory had worsened. On January 29, 2019 the Parliamentary envoy on human rights Lyudmyla Denisova said Hryb is in critical condition between life and death and requires immediate heart surgery.

Ukrainian Ombudsman earlier stated that Hryb requires an immediate heart surgery. On January 29, 2019 Russia denied access to the detainee for the Ukrainian consul. On December 21, 2018 the court refused to change the pretrial detention for house arrest to Pavlo Hryb in the view of his health condition. A commission in the Russian Federation checked upon the conditions Pavlo had in detention and called them acceptable.

To remind, a total of 70 Ukrainian political prisoners are currently held in Russian prisons. They have been sentenced to a total of 240 years in prison. Ten have been liberated.