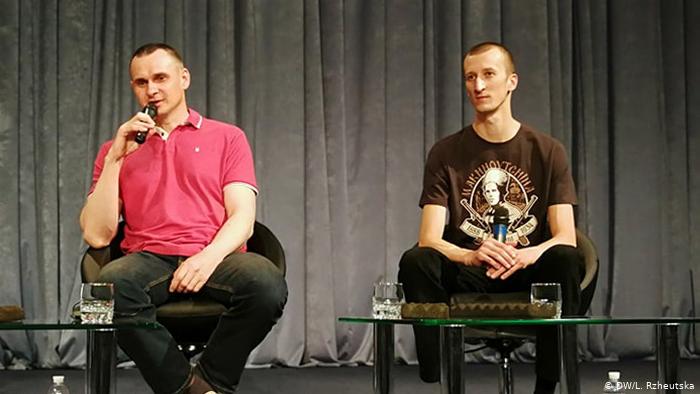 They both spent over five years in prison sentenced on fabricated charges to 20 and 10 years respectively. On September 7, 2019 they came back home together with other 33 Ukrainians in course of the prisoner exchange. During the press conference held in the Ukrainian House in Kyiv on September 10 Kolchenko and Sentsov responded to questions on Crimea annexation, Russia’s aggression, their arrest, prisoner swap, media, political situation in Ukraine and in Russia. UCMC followed the news conference. We herewith present the key statements that the two former hostages of Kremlin made.

Why did they find themselves behind bars?

Both the Ukrainian society and Ukraine’s international partners were convinced that Sentsov and Kolchenko were not guilty and that their cases were fabricated. When asked why he thinks he and Sentsov were jailed, Oleksandr Kolchenko answered: “I take it as a matter of chance. Anyone who was protesting back then or spoke against the pressure on civil liberties could have found themselves in my shoes. I also disregarded safety rules.”

“Sashko (Oleksandr) was detained when he was passing by the building of the Federal Security Service (FSB) drinking beer. As a professional revolutionary he failed (laughs),” added Sentsov. He is also convinced that he was not chosen on purpose and his detention was occasional.

On Russia and political prisoners

Sentsov started his speech by thanking each and every one in many countries for their support and for saving them. He reminded that many Ukrainian prisoners still remain behind bars and promised to do everything possible to help set them free.

“On my end, I will do everything I can (to have the Ukrainian political prisoners released). In addition to our prisoners there are people in Russia, Russians who are also fighting for themselves, for their free Russia, for our Ukraine, they are our true brothers. You know by yourself how things are there. Recent arrests in particular, fast trials. I would like that we don’t separate them. They are Kremlin’s prisoners as well,” he said.

On returning to Crimea

Sentsov: “Being back there – only on tanks, but don’t take my words literally.”

Will Sentsov go into politics?

Answering the question if he plans to go into politics Sentsov said he is grateful that during his five years in prisons the politicians did not contact him. “It is an open question right now. I have not decided yet. It so happened that I am not a public figure but life made me famous and I feel the responsibility. I will be doing what I can for my country,” he said.

Responding to journalist’s question on why it was not possible to swap earlier those illegally imprisoned in the Russian Federation, Sentsov said that “there was constant work at all levels, but the Russian Federation is a system unable to back off. That’s why they were not retreating. People are not interesting to Putin, his own ambitions are. I am very happy that the previous administration did not give in to Putin. It’s hard to bargain with Putin.”

At the same time he noted achievements of the new authorities: “With the new authorities Russia gets a chance to reload these relations. President Zelenskyi is also making a step towards them. I see that he sincerely wants to resolve this conflict for the good of the country giving up no interests and that’s the right thing. I already said that a hundred years of negotiations are better than one day of war.”

“As to the statement that Russia wants peace – even the wolf wearing sheep’s clothing has his teeth sharp, don’t worry. Don’t believe it. I don’t.”

“To Putin it is simpler to give up the Kremlin than Crimea,” Sentsov added.

Sentsov said that on weekends in prison he was watching Kiselyov’s TV show (a propagandist show on the national TV channel in Russia that spreads lots of fake news pieces about Ukraine – UCMC). “I never missed the show. There’s very little entertainment in jail: no circus and no theatre. So you get all in one. It’s all very exciting. Of course one should not believe his single word. Who can actually believe it!? Watching him is fun. It’s actually a perverted pleasure.”

Sentsov and Kolchenko spoke about their hunger strikes. Kolchenko was on hunger strike for 10 days, Sentsov held on for 145 days. They both had to stop following the threats on force-feeding.

Sentsovsaidthathewaswritingadiaryduringthisdramaticexperience. “I was writing a diary, it will be published sooner or later, it will all be there,” he added.

Sentsov emphasized that he managed to reach the goal that made him go on hunger strike, he brought into the spotlight political prisoners in the Russian Federation. “It was my brick that I contributed into the common action. I was just attracting attention to the situation, not just my own situation but to the situation of all the prisoners.”

On importance of letters to political prisoners

“I have not thrown a single letter, I took them with me. I will not reread them but they are dear to me, I keep them,” Sentsov said.

The film director also said he brought 22 kg of paper from the penal colony – these are letters, books and 15 notepads of his writings.

“In jail for any prisoner the most important thing is letters. You can skip meals for a day, there may be no parcel for you but everyone is waiting for letters. So do write, about anything. It supports a lot,” Sentsov noted adding that he was trying to answer all letters.

“I actually did not quite like it when private correspondence was posted online,” he said.

On Tsemakh, actor in MH17 case whom Ukraine transferred to Russia in exchange for Sentsov and other prisoners

Sentsov said the first time when he heard Tsemakh’s name was on board of the airplane heading from Moscow to Kyiv.

“President’s aide came up to ask me if I was against this exchange. I told him it was the first time I hear about it (…) Then I started reading the news about it. It is difficult for me to comment on this situation. I don’t like commenting on actions that others make. There is the President – a person whom Ukraine entrusted with such powers. He has more information than you and I do. He made such a decision, so it means it was necessary,” Sentsov said.

On political situation in Ukraine

When asked what his viewpoint on the political changes in the country is, Sentsov said: “I don’t like quick conclusions and loud words. I need to dig deeper. For now it is difficult to understand. In the view of the letters by people I trust, there are difficulties, not everything is good, many things are not done or were done badly. In general the country is moving and is moving in the right direction.”

“I don’t think I am from Zelenskyi’s camp or from anyone else’s. I am on my own,” he added.

Responding to journalists on his future plans Kolchenko said: “I have already decided that I will continue my studies at the Tavriyskyi national university where I studied before the arrest. I was a third-year student and studied part-time. I plan to continue studies in the same field.”

Sentsov answered: ”I plan to do two most beautiful things in this world – shoot films and live”.