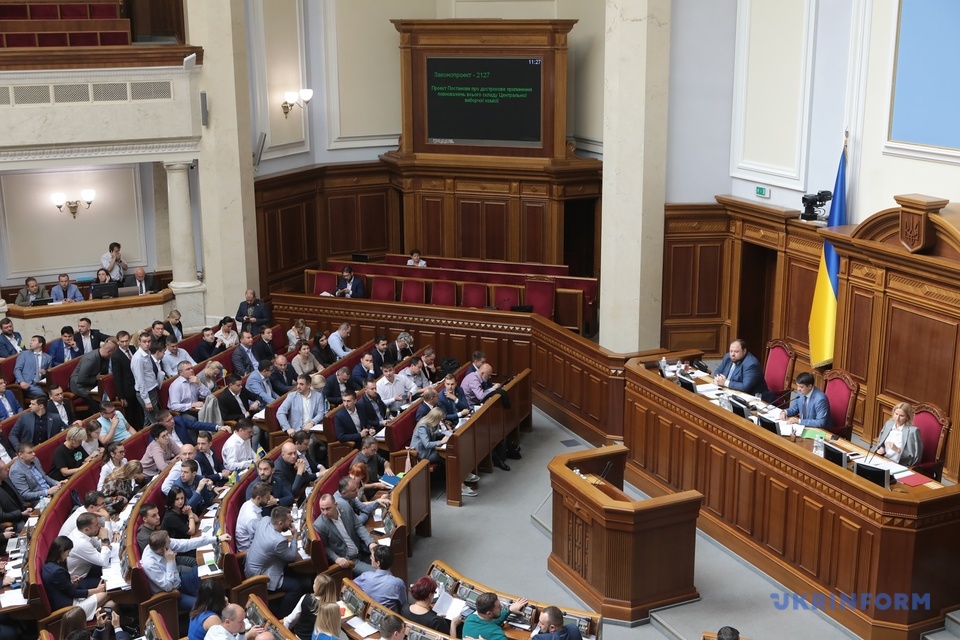 On September 13 the Parliament of Ukraine dismissed all members of the Central Election Commission. The latter was administering the presidential and the parliamentary elections held in spring and in summer 2019 respectively. These elections got highest appraisal from Ukraine’s international partners who said they were free, honest and devoid of violations.

Nevertheless despite the successful recent elections the powers of the Central Election Commission (CEC) were terminated early by the Parliament. The Commission’s members were in office for a year instead of the seven foreseen. The dissolution of the CEC was initiated by President Zelenskyi – he submitted the motion to the respective parliamentary committee. UCMC explains what it means, why it happened and how experts comment on the news.

Whathappened? OnSeptember10 thePresidentofUkraineVolodymyrZelenskyiintroduced the motion to dismissallmembersoftheCentralElectionCommission. OnSeptember12, 2019 respectiveparliamentarycommitteeconsideredthemotion. It was voted by theVerkhovnaRada(theParliamentofUkraine) onSeptember13, 341 MPs voted in favor of the decision. The draft law was adopted in full.

Powers of the Central Election Commission. Central Election Commission is a permanent multi-member state body responsible for organizing and holding elections of the President of Ukraine, of the Parliament as well as localelections. CEC must be independent, unbiased, independent from any political force or central state agency. The Commission is subordinated neither to the Parliament, nor to the President. Political moves towards the agency have justly caused a discussion in the society and among experts.

Why is the President dissatisfied with the CEC? President Zelenskyi accuses the CEC in being biased and unbalanced. The President’s motion suggests that the Central Election Commission “has repeatedly acted in an unbalanced or even politically biased way”, to support the statement it quotes CEC’s order refusing registration to 28 candidates for MPs.

The motion also mentions CEC’s position on the situation in the electoral district no.169 in Kharkiv where the Commission did not register Oleksandr Kunytskyi of the “Servant of People” (Sluha Narodu) party as a candidate at the parliamentary elections, he later lost to Oleksandr Hranovskyi in course of the election race.

Another reason to dissolve the Commission mentioned in the motion is CEC’s position on the situation in the constituency no.198 where the court revoked CEC’s registration issued to Serhiy Rudyk, an independent candidate at the parliamentary elections. The President called the actions by the Central Election Commission “extremely weird and inconsistent.”

The court considered the case following an appeal by the candidate from the “Servant of People” party. After the President submitted the motion to dissolve the Commission, the CEC postponed the recalculation of votesin the constituency no.198.

The Head of the CEC said that dissolution of the Commission calls into question thelegitimacy of the elections held.

“In our opinion (…) the motion is lawful, reasonable but not motivated well enough. Arguments presented (…) show us no motivated reasons behind the decision to dismiss all CEC members,” Aivazovska added.

Andriy Mahera, legal expert, former deputy head of CEC, emphasized the professional and unbiased work held by the Commission in 2019: “In my opinion the Presidential elections were organized and held in the best way possible. There were no complaints about CEC’s work at all. The parliamentary elections, same as the presidential elections, got best evaluation from international observers who studied the situation in detail,” the expert said.

A step towards usurpation of power?Some experts say the decision follows an attempt by the new authorities’ to get wider control over the CEC. “The new team in power is concentrating authority in their hands. The agency that demonstrated professionalism and independence from all political forces even from the ones that delegated many members to the CEC does not suit them,” said Oleksandr Chernenko, expert in election legislation, MP in the 8thconvocation from Petro Poroshenko’s Bloc, in a comment to Hromadske TV.

CEC and the Minsk accords. Experts do not rule out that renewal of the CEC’s composition can be linked to the Minsk process that Zelenskyi is trying to intensify. One of the paragraphs in the Minsk agreements concerns elections in the uncontrolled areas in Donbas – the so-called “DPR” and “LPR”. “We’re moving by leaps and bounds to implementation of the Minsk agreements but not in the order implying liberation of our territories preceding the elections, most probably in the order dictated by Russia – elections come first, liberation of territories and withdrawal of troops follow. According to the OSCE standards as long as the armed groups are there and until the voters’ registry is not restored, it is not possible to hold elections. Any expert will confirm that. It seems that the authorities need the Central Election Commission that will not be asking questions,” Oleksandr Chernenko commented.

Further developments will demonstrate what the President’s actual motives are. It is yet obvious that an attempt to form a central election commission that would suit the authorities is not a positive signal to the Ukrainian society and the international community.