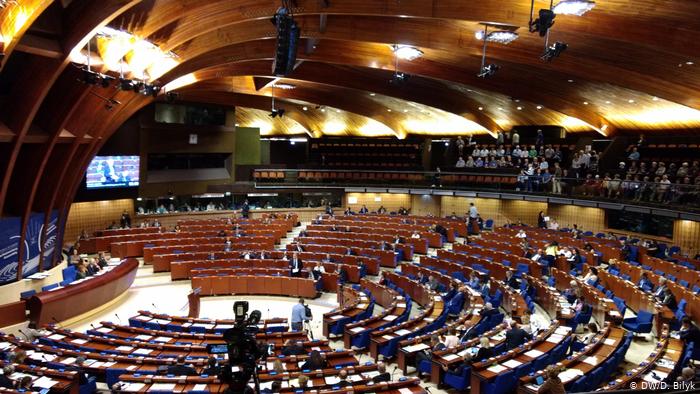 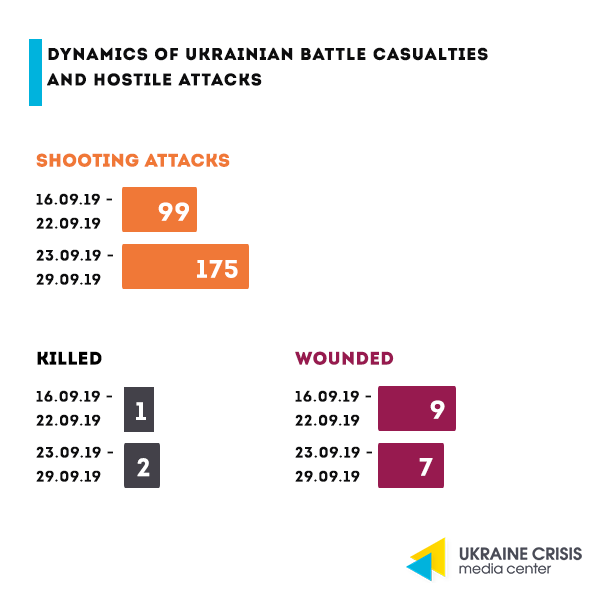 Russia-backed militants keep violating the ceasefire. On September 2 in violation of the Minsk accords they fired four times upon the disengagement area no.3 near Bohdanivka using the weapons mounted on infantry fighting vehicles, grenade launchers and small arms. Russian proxies also fired upon the Joint Forces’ positions from Minsk-proscribed 82-mm mortars. They also opened fire from grenade launchers and small arms.

Ukrainian delegation does not participate in PACE’s autumn session 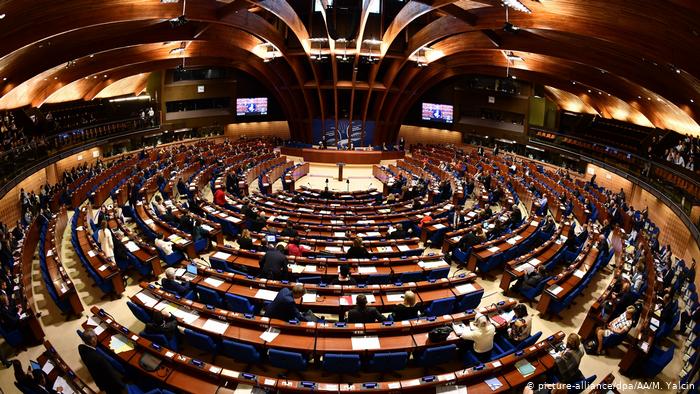 Autumn session of the Parliamentary Assembly of the Council of Europe (PACE) in Strasbourg starts on Monday, September 30 and will last until October 4. Ukrainian delegation is not participating in it protesting against the return of the Russian Federation to the Assembly.

Ukraine’s new delegation to PACE was formed in the Verkhovna Rada (Ukraine’s Parliament) last week. It immediately announced that the delegation will not be taking part in the autumn session due to Russia’s return.

A few members of the new Ukrainian delegation who were also delegates in its previous composition will be in Strasbourg but they will not be able to take part in the session as well as work in committees.

To remind, during its summer session PACE fully restored the authority of the Russian delegation disregarding the member’s violations of the Council of Europe principles.

Back then representatives of seven national delegations made a demarche expressing their protest. Individual representatives of the UK and Sweden later joined them. On October 1 the President of France Emmanuel Macron will make an address at the PACE, he will also take the MPs’ questions. 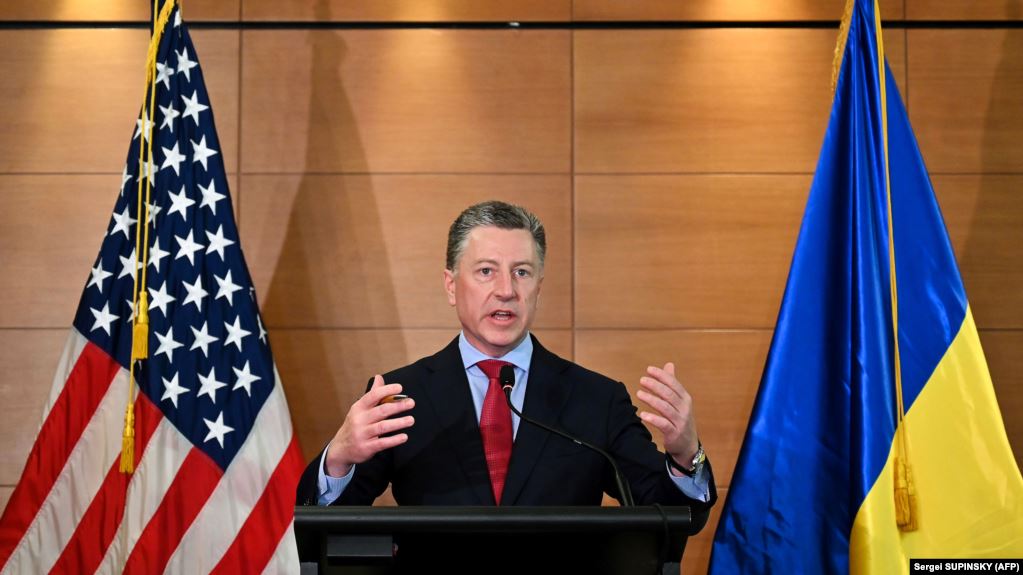 US Special Representative for Ukraine Negotiations Kurt Volker has resigned. It happened against a backdrop of the scandal around the July telephone conversation between the US President Donald Trump and the President of Ukraine Volodymyr Zelenskyi. US media say Volker might have been involved in discussing the Biden case with Ukrainian authorities. He is on the list of US State Department personnel whose data was requested by the House of Representatives investigating into the “Ukraine case”.

Besides Trump’s personal lawyer Giuliani twitted a screenshot of the message dated July 19 in which Kurt Volker was supposedly introducing him to Volodymyr Zelenskyi’s close ally Andriy Yermak.

Next week Volker will appear before the House of Representatives of the US Congress to answer their questions related to the impeachment inquiry against Donald Trump.

What was Volker’s area of responsibility in Ukraine? Volker was appointed US Special Representative for Ukraine Negotiations in 2017, the position did not exist before. In the US Department of State Ukraine-related questions were earlier being addressed by Victoria Nuland, former Assistant Secretary of State for European and Eurasian Affairs, she was also negotiating with Russia’s Vladislav Surkov.

Her area of responsibility was entire Europe and Eurasia, while Kurt Volker was only responsible for Ukraine focusing on the Russia-Ukraine conflict and Donbas.

Volker made numerous visits to Ukraine, met with both the actual and former President and visited Donbas. He had a firm pro-Ukrainian position, was constantly reassuring Ukraine in the US support, maintained a direct dialogue with Russia and often mentioned common residents of Donbas.

How did Ukrainian experts react to Volker’s resignation? Majority of Ukrainian experts took Volker’s resignation as sad news. “I cannot recall any other US high-level official who visited Ukraine over ten times in two years and was not only in Kyiv but also went to Avdiivka, Mariupol and Kramatorsk. This person knew the situation in Ukraine perfectly well,” said Yevhen Mahda, director of the Institute of World Policy in a comment to Hromadske TV.

Experts also say that Volker was constantly raising awareness on the situation in Ukraine, he was sharing his knowledge and understanding of Ukraine with the US Department of State and with the US President.

“My biggest concern is that the position itself will be cancelled. The fact that it exists in the US Department of State sends a clear signal to international actors that the US is interested in the situation in Ukraine,” Mahda told Hromadske TV.

“We did matter to him, it happens quite rarely in politics,” Minister Klimkin wrote on Facebook.

The fifth President of Ukraine and the leader of the “European Solidarity” (Yevropeiska Solidarnist) party Petro Poroshenko expressed his regret on the occasion. “His firmness and strategic vision in countering Russian aggression can hardly be overestimated. Kurt made all of us in Ukraine feel more confident – be it about peaceful settlement, reform progress or the US role,” Petro Poroshenko said.

Head of the National Security and Defense Council Oleksandr Danyliuk resigns: what’s it all about? 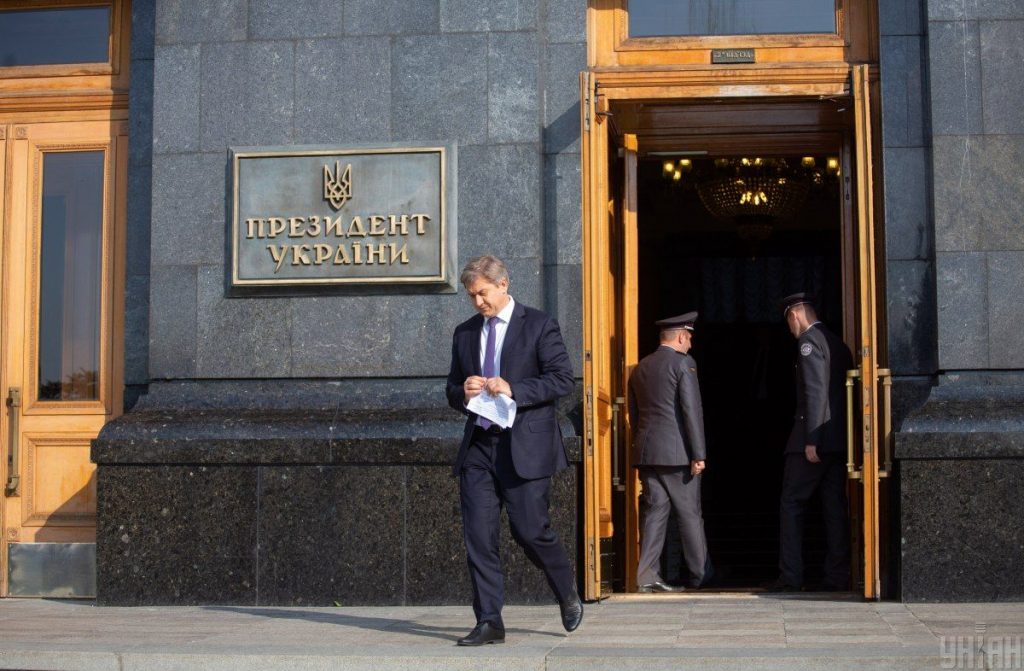 Head of the National Security and Defense Council Oleksandr Danyliuk filed a resignation claim in the last days of September. He did not give the reasons. Danyliuk was one of the first well-known politicians who joined Zelenskyi’s election campaign. It now seems that he is the first one to leave.

Who is Oleksandr Danyliuk? Oleksandr Danyliuk joined Zelenskyi’s team in March 2019 before the first round of the presidential elections. He worked on the Paris visit of the then candidate for President when Zelenskyi was supposed to meet the President of France Emmanuel Macron. Hromadske TV quotes experts saying that back then Danyliuk “actually legitimized Zelenskyi in the eyes of the international community”.

In contrast to Zelenskyi Danyliuk is well-known internationally. In 2016-2018 he was the Minister of Finance in Volodymyr Hroisman’s government and was leading negotiations with the International Monetary Fund that resulted in disbursing of the first tranche.

While in office as Finance Minister Danyliuk also nationalized PrivatBank and was preparing documents for the trial of the state of Ukraine against Ihor Kolomoiskyi in London.

After Volodymyr Zelenskyi was elected President Danyliuk was considered as a possible candidate for the Head of the President’s Administration. After the parliamentary elections Danyliuk was one of the potential candidates for Prime Minister.

National Security and Defense Council. Instead the President appointed Danyliuk to the post of the Head of the National Security and Defense Council. The Council is a coordination body subordinated to the President. The head of the State appoints Council’s members and chairs it. Its members include the Prime Minister, the Minister of Defense, the Head of the Security Service, heads of the Internal Affairs and Foreign Affairs ministries.

Why did Danyliuk resign? During his five months in office at the National Security and Defense Council Danyliuk there were several episodes when he disagreed with Zelenskyi’s team. He thus had his own vision of the “reloaded Administration of the President” that Andriy Bohdan transformed into the Office of the President. Danyliuk insisted that employees of the Office are selected through a competition while Bohdan rejected the idea.

Danyliuk was overseeing the reform of the state-owned group of companies “Ukroboronprom” in the defense sector. The supervisory board of the group is chaired by Aivaras Abromavicius with whom Danyliuk used to work under Poroshenko’s presidency in 2014-2016. Abromavicius was the Minister of Economic Development in Arseniy Yatseniuk’s government.

While heading the National Security and Defense Council Danyliuk stood for stripping the Security Service of the powers to investigate economic crimes. Security Service Head Ivan Bakanov did not support the idea.

That’s how Danyliuk, one of the first to have joined Zelenskyi’s team, has gradually found himself “at home among strangers”.

Ukrainian media referring to own sources, say that Volodymyr Zelenskyi himself crossed out Danyliuk from the list of the official delegation members for the US visit. According to the source it became the last drop for Danyliuk to resign. Sources close to the National Security and Defense Council say that Danyliuk resigned due to the conflict with the Head of the President’s Office Andriy Bohdan.