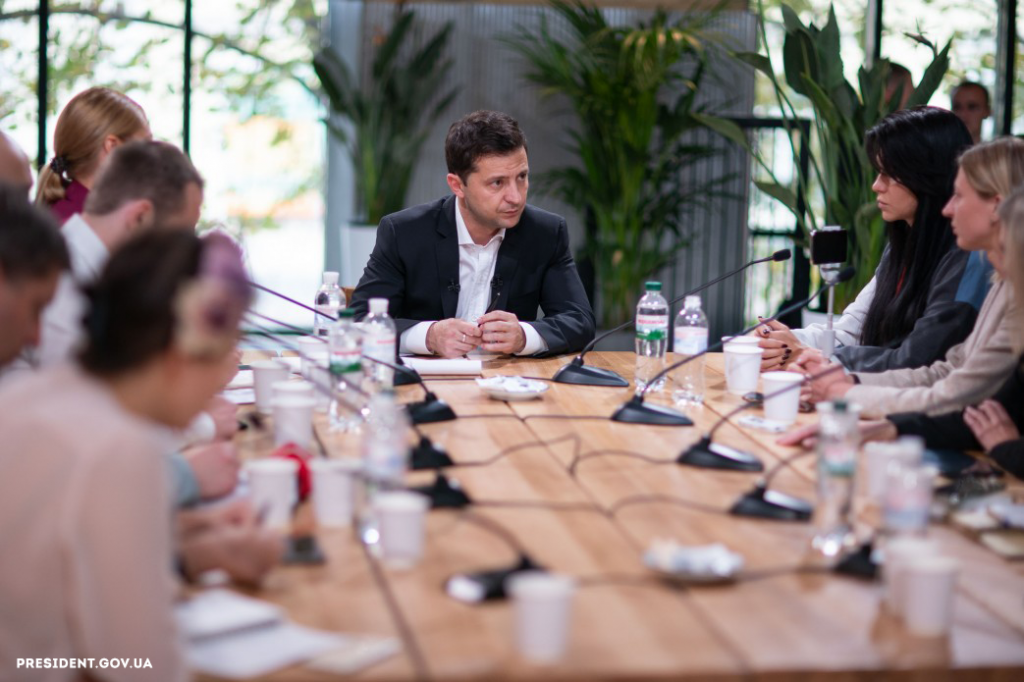 What appears to be an unprecedented and record-long “press marathon” by President Zelenskyi was held in Kyiv on October 10. The President met with the media, the press event lasted about 14 hours with minor breaks. The marathon took place in the trendy Kyiv Food Market – a recently opened venue that stayed open for visitors on the marathon day. The President was meeting with groups of 7-10 journalists each 30 minutes. He took questions by a total of 300 journalists, many questions were repeated. 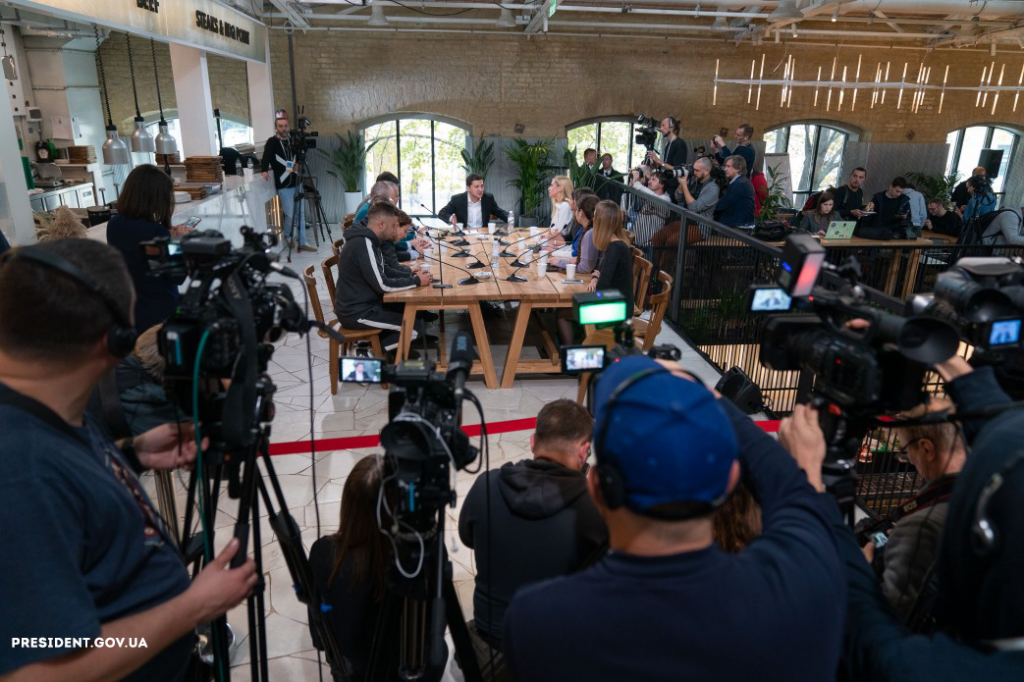 Meeting the press at the food market: why this format?

The idea to talk to the press in course of a marathon had several very practical goals. Firstly, it was literally a talk that the President had with the media, not a press conference or a briefing but precisely a talk. The President’s team is convinced that they communicate with the people directly, through social media and that they do it well. At the same time their media communication is quite sporadic and was often a failure in the recent months. The marathon was supposed to tackle precisely this issue.

The President literally spoke to all the press – to journalists of the overwhelming majority of media outlets. They were sitting at the table in a small group, he was looking them in the eyes and responded to questions that each of them asked.

While communicating in small groups Zelenskyi had a chance to establish a positive contact on the personal level.

In one day he commented on all the widely discussed themes: starting with the Steinmeier formula and disengagement of troops to appointments, oligarchs and Trump. With his “information leap” Zelenskyi was in try to correct all the failures that his communication team made in the recent months. Below we cite the President’s quotes on key topics.

On “Steinmeier formula”, Normandy-format meeting and situation in Donbas

“It would be incorrect to say that the Steinmeier formula has been implemented. The formula comes in force when the Law on the special status comes in force.”

“I would not want that the conflict in Donbas is frozen, I would not want us to have our Transnistria or Abkhazia. I cannot give you a 100 per cent guarantee that it will not happen, because that’s the way it is now.”

“I think we shall get the date of the Normandy format set next week. I think it will be the date this year, in November.”

“I know that there are humanitarian issues, the language issue will be also discussed – so that they (Donbas – edit.) get the status of the Russian language as regional. I think there are many humanitarian compromises that we can discuss.”

On negotiations with Russia 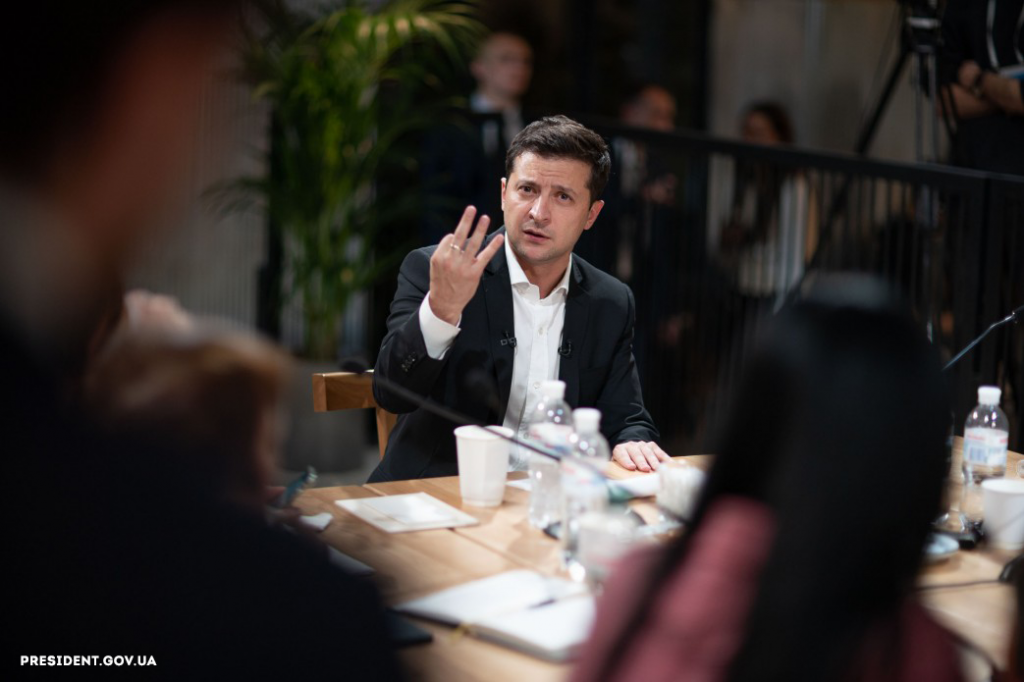 “Do you want it to be a poker game and (that) they know my cards? We sit at the same table, do I have to have some strategy? Or do you want everyone to know where we have our troops (stationed), when we leave and where we withdraw them? I need to have advantages, if I completely reveal our plans, it is (going to be) a defeat.”

“We had a swap. All telephone calls to Putin were made by me. It won’t hurt my dignity, I truly want to end this war. So I consider these were the first steps on our side (towards them).”

On protests on Maidan “against capitulation”

“As to Maidan, I am not afraid of it. In any moment, in any second, if the society does not want my team to carry on and me to be the President… Look, there will be no bloodshed.”

On Putin and prisoner swap

“If the Normandy format is continuously postponed, we will then be finding new formats to bring our people back. One of them is Minsk, another one that has worked out is my direct talks with the President of the Russian Federation. To return people, I am ready for direct talks.”

On the Trump scandal and Ukraine-US relations 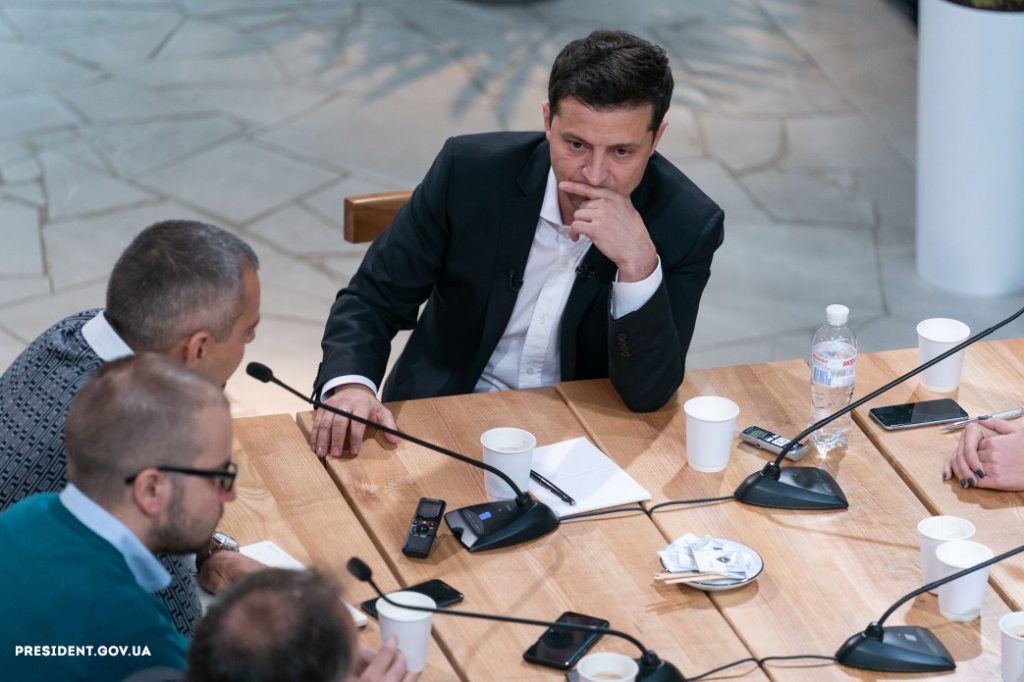 “The call (by Trump to Zelenskyi in July 2019 – edit.) influenced this one thing: I understood that we need to get the meeting, that I wanted to introduce him to our team. I wanted to convince him to come to Ukraine.”

“This call has nothing to do with the Burisma story.”

“I don’t want to meddle into the US election in any way and I will not do it.”

“We need to strengthen our relations with the US. We had a meeting with key US people, with the President of the United States. We are waiting for an official visit to the United States.”
“I don’t want to comment on what is happening in the domestic politics (of the US – edit.). I see no changes towards us in (their) foreign policy… If there are changes, we will learn about them from Twitter.”

“They owe their victory to me, to the support that my surname has in the society. I don’t want to wreck the party, they know my attitude. If they start eating each other, I will dissolve them in one year. It’s a fact.”

“’Servants of the People’ are afraid of any draft laws that concern the MPs. There are experienced parliamentarians – members of other parties, all they do each day is they exercise pressure: emotional, with money or any other type… They are trying to split the ‘Servant of the People’ party.”

On Privatbank and Kolomoyskyi

“When meeting our partners I asked: ‘Do you want me to influence Privatbank?’ They said: ‘No, as the President you’d better not. Don’t you influence it but also do influence it as well.”

“We’ll see the outcome (of the Privatbank trial – edit.). If the result will make it necessary for me to protect our country, I will be protecting it.”

“Kolomoyskyi knows my position on Privatbank, it is a state position, (he knows) that I will be protecting Ukraine, protecting the state, he knows it.”

“I don’t know these people. We said that we would reload all agencies. I don’t want (the situation when) someone (ex-President – edit.) left and everything stayed.”

On dismissal of the National Security and Defense Council Head Danyliuk

“I disagree with his position, that he left because of Privatbank… By the way, Sasha (Oleksandr) wanted to be the Prime Minister. I told him honestly: ‘San’ (Oleksandr), you are a professional but I chose another candidate. Complicated relations with Bohdan (Head of the Presidential Office – edit.) also contributed.”