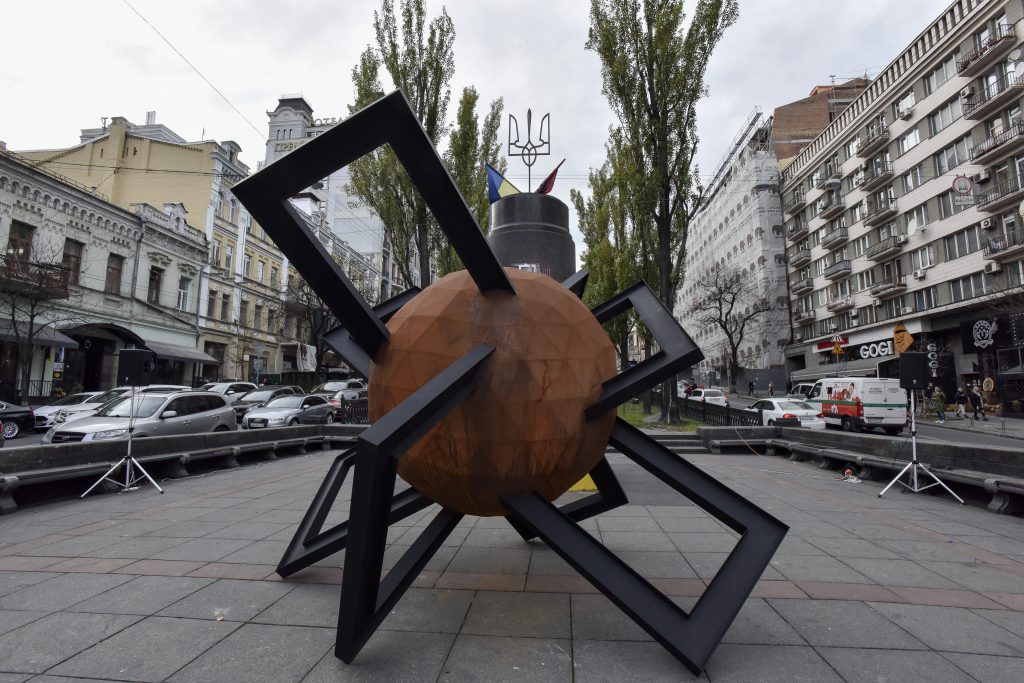 Ahead of the sixth anniversary of the Revolution of Dignity Ukraine Crisis Media Center installed the sculpture “Confrontation” on Taras Shevchenko Boulevard in Kyiv. It comes as an attempt to visualize the feeling of inner tension, conflict and relentless force beyond reason. The author of the sculpture is Oleksiy Zolotaryov who won the “Price of Freedom” competition held by Ukraine Crisis Media Center (UCMC) announced to conceive and commemorate the fifth anniversary of the Revolution of Dignity and of UCMC.

“We mainly work in the media but we wanted that this time our work gets not only a virtual but also a physical footprint, that’s why we turned to an artistic interpretation of the price of freedom. The project by Oleksiy Zolotaryov is the concept that our jury liked most. Over the last five years, we were often at the forefront of the hybrid information confrontation, the struggle for the hearts and brains of the people in Ukraine and abroad. We understand that it is of utmost importance that people think critically and under no circumstances forget about the huge price that Ukraine is paying daily for its freedom and dignity and that they ask themselves every day: what is my responsibility as a professional, human and citizen? How do I contribute so that the price of freedom does not grow even more? What can I do to expand the space of freedom and dignity at home and everywhere?” said Nataliya Popovych, co-founder of Ukraine Crisis Media Center.

The competition was held in January 2019. Selected artists were invited to participate. Jury members were Pavlo Hudymov, curator of Ukrainian and international arts projects, Kateryna Filyuk, art critic, curator at IZOLYATSIA foundation, Tetyana Filevska, cultural manager, creative director at the Ukrainian Institute, Nataliya Popovych and Hennadiy Kurochka, UCMC co-founders and Olesya Drashkaba, UCMC’s creative strategist, editor-in-chief of “Uchoose.info” – a media project on critical thinking. The works were evaluated by how brilliant the suggested idea is, how deep the reflection over the theme reaches, how professional the sketch is as well as by the author’s willingness to produce the installation meeting the deadline and within the budget. The money for production of the “Price of Freedom” project was provided as part of UCMC’s institutional activities.

“Oleksiy’s work inspired us because everyone may find many senses here. One may see a solid form that is being torn apart from within as well as containment, confrontation,” Olesya Drashkaba said.

“Confrontation is what is going on inside each one of us, in the city, in the country, in the world in general. It is about the challenges that we are facing. This work is, in the first place, about my own emotions that I lived through five years ago while everyone around me, the entire society was feeling the same. Everyone can talk about it in their own way but we have all lived through it. It is important to remember why it happened. An object that pops up in public space starts communicating with people. Regardless of the author’s original idea, it leaves space for other interpretations,” Oleksiy Zolotaryov said. 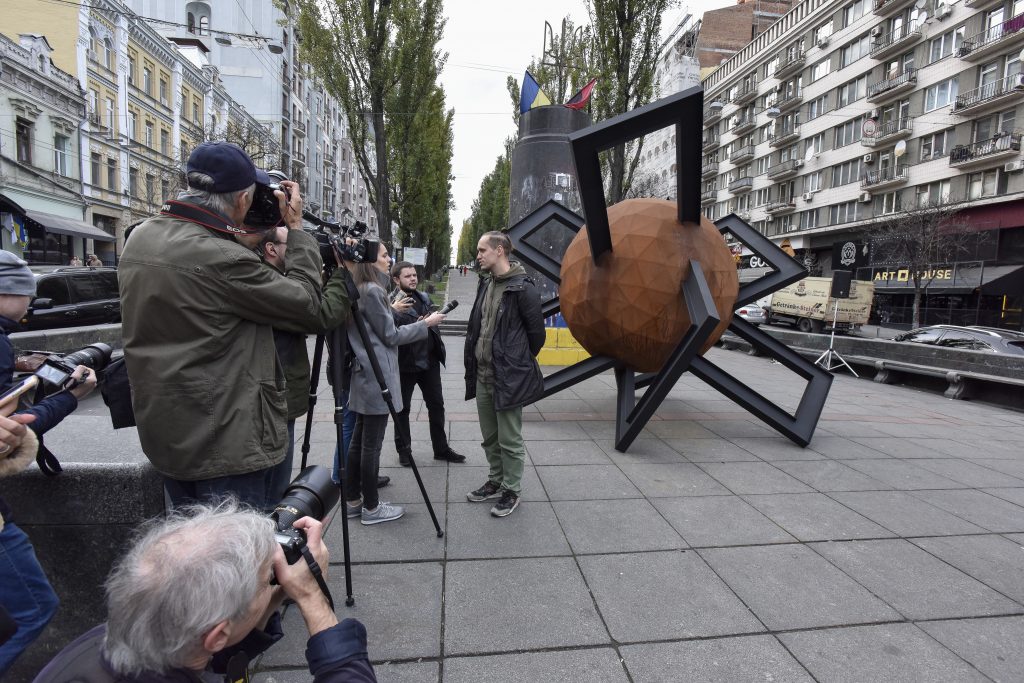 The start of the Taras Shevchenko Boulevard was chosen for the installation as it used to be a place for a pedestal holding the symbol of the totalitarian past. After the Lenin monument was toppled, it turned into a site for reflections of contemporary artists.

“It is already the sixth artistic intervention happening on this site. It should always belong to people. I hope that interventions will continue, not just here but also in other places in Kyiv that are socially important,” said Diana Popova, director of the culture department at the Kyiv City State Administration.

“This extremely powerful symbol of freedom is here in the right place. We will be searching for other locations for a future exposition that are equally filled up with sense both in Ukraine and abroad,” Nataliya Popovych said.

The installation will stand on Taras Shevchenko Boulevard for several months. It will be then constantly traveling to other locations. The next possible location is on the European square in Kyiv, in front of the Ukrainian House. 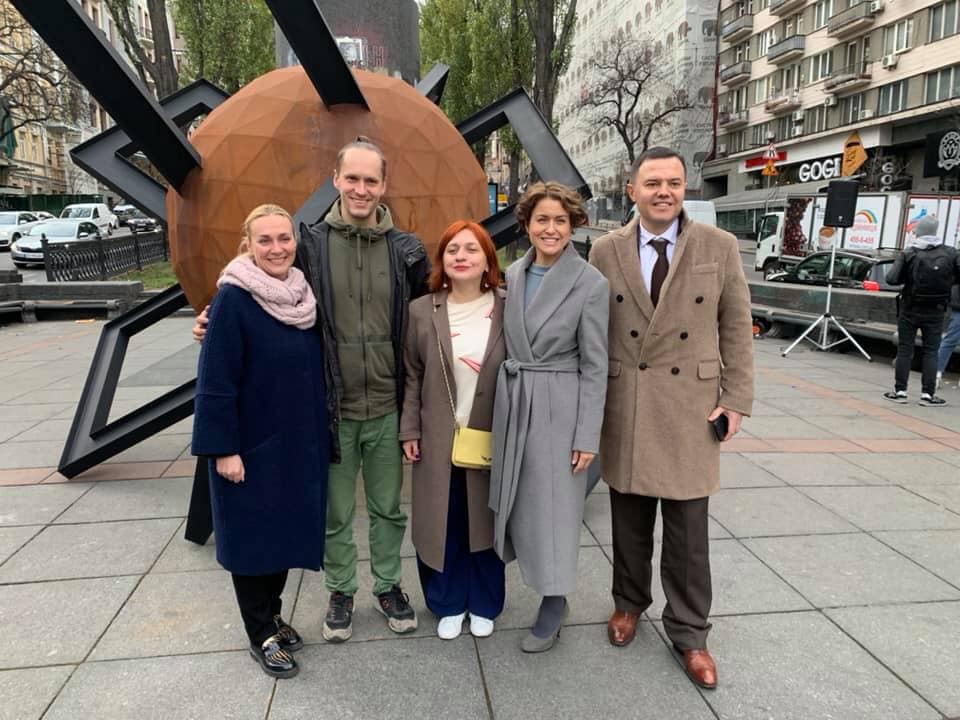