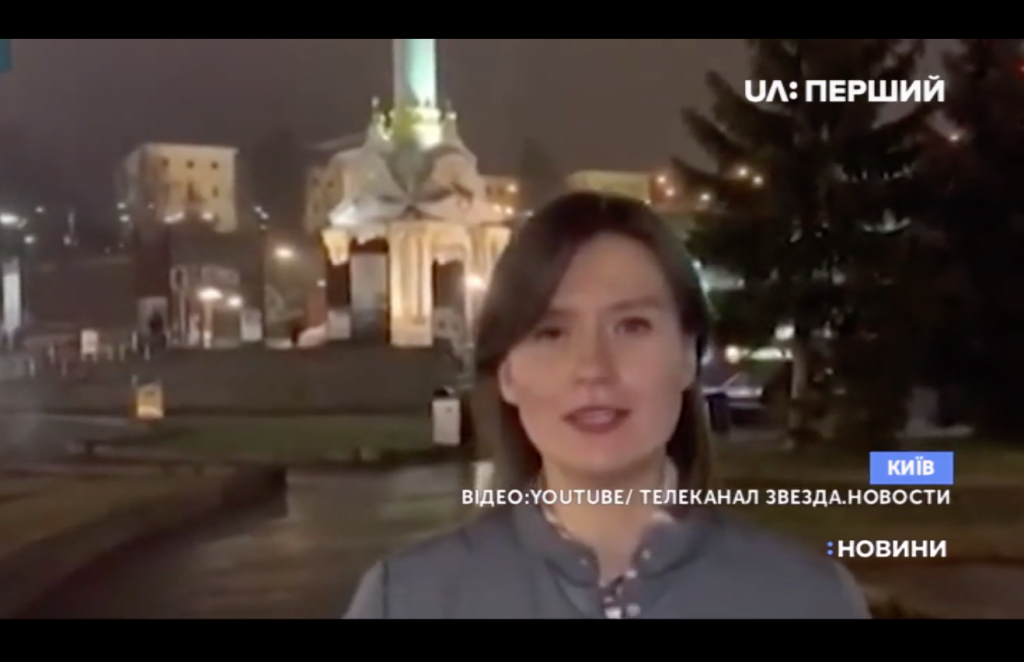 At the press conference of December 10 held after the Normandy summit in Paris President Volodymyr Zelenskyi encouraged Russian media to come to Ukraine – to see what is actually going on in the country. Three days later, on December 12 a crew of “Zvezda” television channel of the Russian Federation Defense Ministry set foot in Kyiv. We take a look at what it means and what the civil society’s and authorities’ reaction is.

What did Zelenskyi say at the presser? At the press briefing in Paris that followed the Normandy format meeting President Zelenskyi invited Russian propagandists to come to the contact line in Donbas to see in their own eyes what is going on there. He said: “You should come, I will guide you in person. Just make it real, not like your fellows, there’s Solovyov (Vladimir Solovyov, Russian propagandist – UCMC) who’s joyfully talking from Moscow about what is going on. I always say, you should come directly to see what is going on here, palp it with your feet, arms and eyes. No need to worry, they won’t dirty their Brioni shoes.”

What happened next? What seemed to be a joke at the press-conference very quickly turned to be true. In Russia they took the invitation literally. The TV crew of the “Zvezda” channel of the Russian Federation Defense Ministry was let enter Ukraine. “Zvezda” correspondent Diana Sirazi and cameraman Aleksandr Stolerov flew to Kyiv following the invitation by the Ukrainian President Volodymyr Zelenskyi.

“The TV crew of ‘Zvezda’ turned to be among the first Russian journalists who were let come to Kyiv after the invitation by the President of Ukraine Volodymyr Zelenskyi made at the Normandy Four summit in Paris on December 10. The unofficial entry ban to Ukraine was valid for Russian reporters from 2014,” the statement on the TV channel’s web site reads.

Diana Sirazi said they came upon the invitation of the Ukrainian President to “check if he keeps his promises and if they are let enter at the customs.”

She ended her video on Maidan Nezalezhnosti square. “Yet it is unclear if the doors are now open for all Russian journalists and how long it will last,” Sirazi added.

Reaction of the civil society

The statement was published on UCMC’s web site. “Resulting from the invitation, representatives of ‘Zvezda’ television channel notorious for spreading numerous fakes and hate speech have come to Kyiv today. Television channel ‘Zvezda’ is an information unit of the Defense Ministry of the aggressor state. The visit of its journalists is thus a threat to our state information security,” the statement reads.

“We emphasize that visits of Russian propagandists to Ukraine will lead to reinforcement of information aggression that has been one of the key components of Kremlin’s hybrid war against Ukraine.”

Security Service of Ukraine said they are observing the situation with the propagandists of “Zvezda” television channel: “We are observing, if there are violations, we’ll apply legal measures,” the agency’s spokeswoman Olena Hitlyanska said.

She said “Zvezda” correspondent Diana Sirazi and cameraman Aleksandr Stolerov entered Ukraine as regular travelers not specifying they were journalists. The State Border Guard Service Ukraine in a comment to “Ukrainska Pravda” confirmed that the Russian citizens in question crossed into Ukraine as regular foreign nationals. The State Border Guard Service elaborated that they had not received any additional instructions from other law enforcement agencies that would ban the persons in question from entry.

“Liga.net” quotes its source at the State Border Guard Service of Ukraine saying that the channel’s crew entered Ukraine on a “private visit”, they said they were visiting their relatives. Instead a source of “Ukrainska Pravda” at the Security Service of Ukraine said that the journalists had been identified: “They will not be let enter Ukraine for the second time”. Other sources said that the visit is a deliberate provocation by Russian media in response to Volodymyr Zelenskyi’s words pronounced in Paris. A similar opinion was voiced by an unnamed source of “Liga.net” in a law enforcement agency: “They are provoking. Zelenskyi invited (them) to come and see Donbas. Agents of the Defense Ministry of the Russian Federation were first to come to stage a provocation so that we throw them out immediately and thus refute what the President said.”