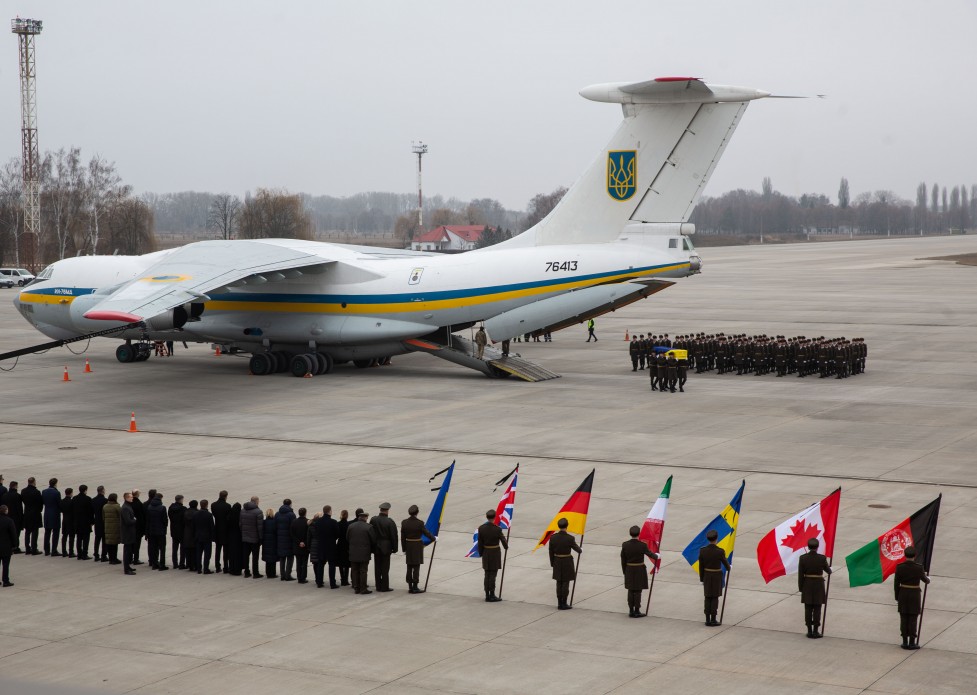 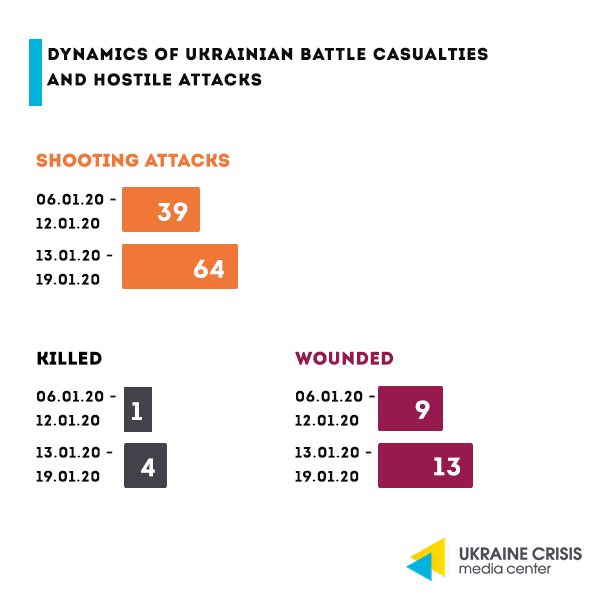 On January 15 they fired upon the Ukrainian troops’ positions in the area of responsibility of “Pivnich” (North) operational-tactic command outside Orikhove. Russia-backed militants used 120-mm mortars (27 rounds), grenade launchers, heavy machine guns and small arms in course of the attack. On January 18 one Ukrainian serviceman was killed in action and 10 more troops were wounded in action.

The last flight: Ukraine bids farewell to victims of the Iran plane crash 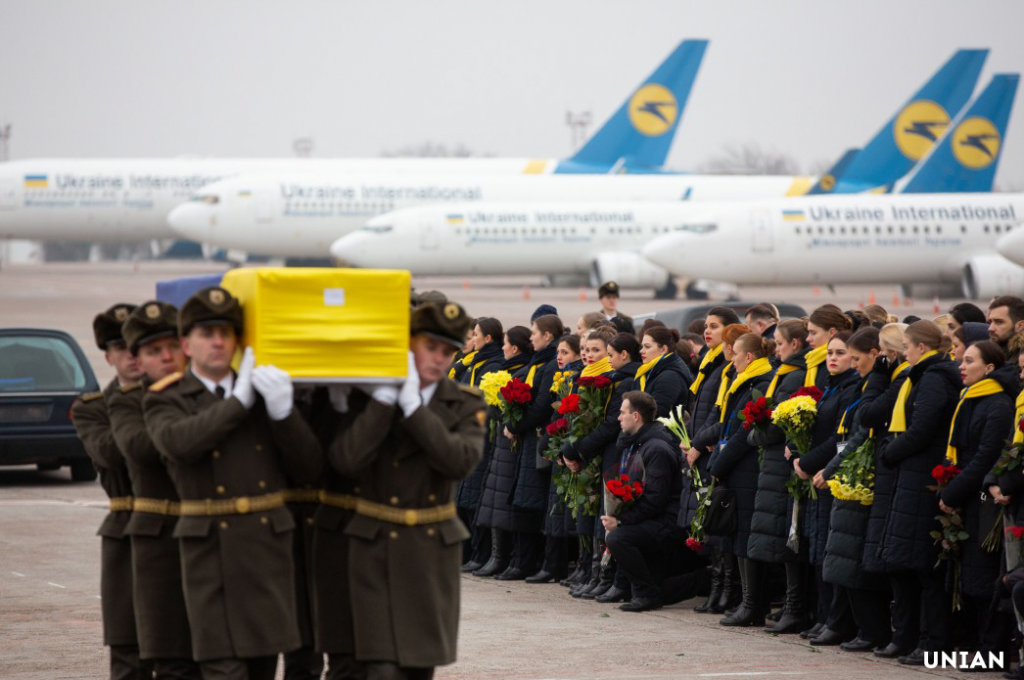 The plane carrying bodies of Iran plane crash victims landed at the Kyiv Boryspil international airport on January 19 at 11am. The farewell ceremony was attended by President Volodymyr Zelenskyi, Prime Minister Oleksiy Honcharuk and Head of the Parliament Dmytro Razumkov. The plane brought 11 coffins with bodies of Ukrainians killed in the shootdown of the Ukraine International Airlines plane in Iran. At about 11:40 the catafalques carrying the coffins arrived at the airport’s Terminal B where the victim’s family members and colleagues at Ukraine International Airlines gathered.

Ukraine will continue its work to completely shed light on circumstances of the Ukraine International Airlines plane crash of January 8 near Teheran and make sure that all responsible for the disaster are held liable, emphasized Oleksiy Danilov, Secretary of the National Security and Defense Council. “Today a plane has arrived from Iran carrying bodies of Ukrainians killed in the horrific plane crash. Ukraine has incurred an irreparable loss. Today we have a possibility to give them our last goodbye in their native land. My deep condolences to the families and eternal memory to the victims. Our work will not stop until the circumstances of the tragedy are completely clear and those responsible are held liable,” Danilov wrote on his Facebook page on Sunday, January 19.

Black boxes. Head of the accident investigations unit of Iran’s civil aviation authority Hassan Rezaeifar said that black boxes of the downed plane are being examined by Iranian experts and will be passed to either Ukraine or France only in case the attempts to read them are unsuccessful. “We are trying to read the black boxes here in Iran. Otherwise, our options are Ukraine and France, but no decision has been taken so far to send them to another country,” the state-run Iranian news agency IRNA quotes the official.

Further investigation. Ukraine will be asking that the joint investigation team investigating into the shootdown of the Ukrainian plane is granted full access in Iran, said Ukraine’s Foreign Affairs Minister Vadym Prystaiko talking to journalists in Kyiv. “Our position stays firm, independently of the victims’ bodies return to Ukraine,” Prystaiko said.

“Our position was to avoid giving facts before they’re confirmed. A thorough and unbiased investigation is needed. The criminal case started in Ukraine has to be resolved. We will be demanding that the joint investigation team is granted the permission to work in Iran as well as the access to flight dispatcher talks etc.,” the Minister said.

Trilateral Contact Group restarts its work in Minsk: will the subgroup on border control be created?

This year’s first meeting of the Trilateral Contact Group on peace settlement in Donbas was held in Minsk. The Ukrainian side came up with a series of initiatives, suggesting to create a subgroup that will be discussing control at the Ukraine-Russia state border.

“Combat actions can restart there. We cannot guarantee that weapons and troops won’t cross the border,” said Maria Zolkina, analyst at the Ilko Kucheriv Democratic Initiatives Foundation. “That is why the Ukrainian side is suggesting the initiative in Minsk.”

Dangerous compromise: border control shortly before elections.Maria Zolkina says the suggestion made by the Ukrainian side within the Trilateral Contact Group to set a subgroup on border control is well-grounded. At the same time the expert is warning against the “compromise” on Russia’s terms when elections in the occupied territory will be held without demilitarization, actual border control and competitive environment for political forces.

“Russia can come up with a compromise (or the Ukrainian side will) suggesting that control of the Ukraine-Russia state border will be passed to Kyiv shortly before the elections (one week or several days ahead), or on the election day. The election campaign will be held in the conditions incompatible with free legal elections,” explains Zolkina. “It is better to refuse this formula. EventhoughIseethatZelenskyi’steamhasthisoption. To achieve swift reintegration they are ready to close their eyes on the conditions in which elections in the occupied territory will be held. The Russian Federation can agree to this dangerous ‘compromise’ closer to the Normandy Format meeting. It can also bring it up at the meeting to demonstrate its ‘good will’. It sits well with Kremlin’s logic.”

Famous actor I.Okhlobystin is giving an interview to famous oligarch K.Malofeev (one of the financial backers of Russian military aggression) about his dream to occupy European countries. Not only does Okhlobystin profoundly misunderstand what isolationism is all about, but he openly threatens European countries such as Italy, France and Spain.

This is Zakhar Prilepin, one of the acclaimed Russian writers as well as a person with somewhat substantial political ambitions. He is also a member of new working group set up to draft proposals for amending the constitution of Russian Federation.