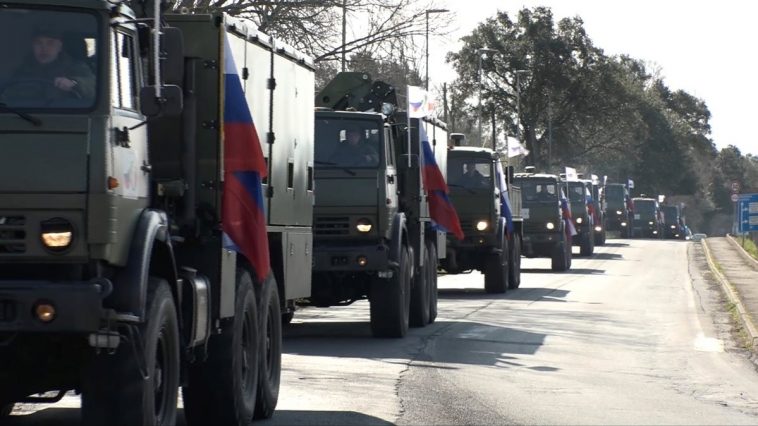 Besides, Russia’s proxies fired upon the disengagement site no.3 Bohdanivka-Petrivske from small arms. Ukraine’s Joint Forces did not return fire adhering to the ceasefire.

There are no recorded coronavirus cases in Ukraine’s Joint Forces.

Minsk meeting: the Consultation Council at a dead end

Negotiations of the Trilateral Contact Group on peace settlement in Donbas came under the spotlight last week as it was expected that the so-called Consultation Council would be established within the political subgroup on March 25. Parties to negotiate within the Council were supposed to be delegations of Ukraine and of the so-called “representatives of ORDLO” (uncontrolled territories in Donbas), while Russia would be an observer.

The decision caused indignation in Ukrainian society, criticism within the expert community and even the split of opinions within the “Servant of the People” (Sluha Narodu) party.

Even though on March 25 the Minsk meeting did not happen offline (during the pandemic it was replaced by a video conference), it was still dangerous. The Russian Federation had an idea how to legally approve the document even given that the meeting participants were physically apart.

The negotiations were exhausting. They lasted three days – from March 24 to 26. Their results give Moscow no occasion to celebrate.

Despite the signature of the Head of the Presidential Administration Andriy Yermak on the minutes of the Trilateral Contact Group meeting of March 11, this week the Ukrainian delegation has actually changed its position. Kyiv disagreed with establishment of the Consultation Council in its preliminary setting.

Instead of officially creating the Consultation Council, the Ukrainian delegation suggested Russians to extend consultations on the matter.

To Kyiv further consultations represent a search of a more acceptable, “soft” format of a consultative body, while Moscow will benefit from the formula of the Consultation Council that was endorsed on March 11: it excludes Russia from negotiation parties, makes militants a party, and gives Moscow arguments on “internal conflict” in Ukraine.

After the video conference the Ukrainian side almost refrained from commenting on it. Instead, Russian media and web sites of pseudo republics released dozens of comments by negotiation participants, both on the Russian side and on that of its proxies, complaining that Ukraine had allegedly made a U-turn in its position on the Consultation Council reaching as far as completely disapproving of its establishment.

The Minsk-based Trilateral Contact Group failed to agree on other issues as well. Thus, progress was achieved neither on a new prisoner swap, nor on opening of extra control points and definition of new disengagement sites.

“From Russia with love”: Moscow uses pandemic as a cover for its special operation in Italy

While the world is fighting against the coronavirus pandemic, Russia is trying to use the pandemic in its own interest. Thus, it sends “humanitarian aid” to Italy. Italian media widely covered the event, they are quoted by Olha Tokariuk for Hromadske.

A convoy of khaki trucks drives along the deserted Italian highways. The military “Kamaz” trucks bear Russian tricolor flags and stamps “from Russia with love”. That’s what they called it in Kremlin – the initiative of sending aid to Italy hit hard by coronavirus. It though looks like a special operation the actual objective of which is to hit the EU and NATO, and bring lifting of sanctions on Russia back on the agenda.

Russia’s aid to Italy was agreed during a telephone conversation between Italy’s Prime Minister Giuseppe Conte and President of Russia Vladimir Putin on March 21. First military jets IL-76 from Russia landed at the military base Pratica di Mare outside Rome in the evening on March 22. On March 25 a convoy of 22 Russian “Kamaz” trucks started from Rome to the north, driving 600 km across the country, headed to Bergamo, Italy’s hardest-hit commune.

“Eighty per cent of Russian supplies are useless”. On March 25, when a convoy of Russian “Kamaz” trucks with tricolor flags started to Bergamo, Italy’s “La Stampa” newspaper quoting its own sources among high-level authorities and at the General Staff wrote that bigger part of Russian aid sent in to the country, is useless. Thus, Russia supplied mobile sterilization laboratories and equipment for outdoor and indoor disinfection. At the same time Italy’s Higher Institute of Health considers disinfection of streets an inefficient measure against the spread of coronavirus.

Who’s in charge of the operation? What’s noteworthy is that the “humanitarian” operation in Italy is overseen by the Russian Defense Ministry not the Healthcare Ministry. According to “La Stampa”, the personnel to have arrived in Italy have military ranks. The Russian delegation includes military doctors and virologists. It is chaired by General Sergei Kikot who argued with the Organization for the Prohibition of Chemical Weapons last year that the Syrian President and Russia’s ally Bashar Assad is not using chemical weapons, despite the vast evidence to the contrary.

What is Russia’s true goal? It all looks like Russia’s large-scale propagandist operation that has several objectives. Firstly, it aims to strengthen Russia’s geopolitical weight in Italy and in the region. Secondly, Russia brings discord inside the European Union and NATO reinforcing the rhetoric already present in Italy that its true friends are not its western partners but Russia and China. Italy hosts the world’s fifth-largest contingent of U.S. troops, so a triumphant march of Russian military vehicles in a NATO member state is a demonstrative challenge.

Thirdly, with the PR operation of “saving Italy” Russia is trying to bring back on the agenda revocation of sanctions. Italian authorities headed by Prime Minister Conte share the European Union’s position, Italy repeatedly voted to keep the sanctions against Russia. Inside Italy there are voices in support of the revocation, often coming from the far-right party “Lega” and its leader Matteo Salvini.

In try to use the coronavirus pandemic to their benefit, Russian diplomats are actively promoting the statement that sanctions are worth lifting as a sign of solidarity in the face of a global threat.

As of March 30, 480 coronavirus cases were recorded in Ukraine, 11 people died. Daily updates on Ukraine’s fight against coronavirus are available in “Ukraine World’s” live news feed.