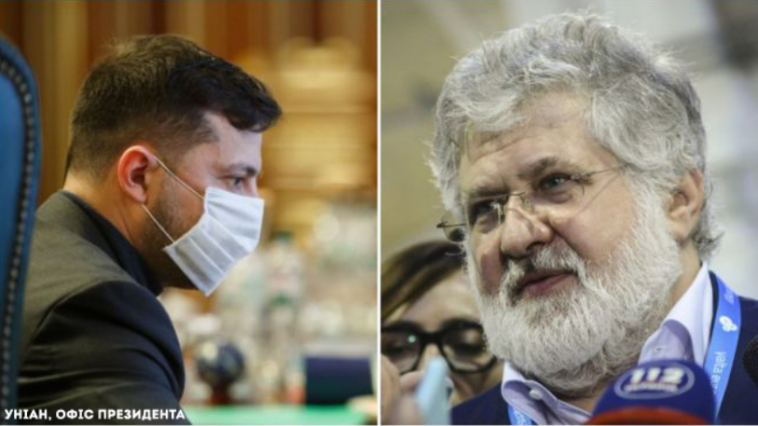 Cooperation with the International Monetary Fund seen by Ukraine’s business and economists as nearly the sole hope of Ukrainian economy during the crisis prompted by coronavirus, has been put on hold. The reason is 16 thousand amendments that MPs belonging to Kolomoyskyi’s group of influence introduced to the draft law that regulates nationalized banks.

In the last days of March during extraordinary parliamentary sittings, MPs passed the law on the land market in the second reading and considered the “anti-Kolomoyskyi” banking law in the first reading.

Soon after both officials and experts added more certainty to their comments that very soon, in just a week, Ukraine could not only be starting a new cooperation program with the IMF but could also get separate assistance from the Fund to fight against coronavirus. Moreover, other credit programs by international partners – World Bank and the EU, are linked to cooperation with the IMF. President Zelenskyi made an assumption that Kyiv could get up to USD 10 billion from creditors.

IMF’s position after the draft law passed the first reading. The IMF outlined what’s key for Ukraine to restart cooperation. The International Monetary Fund welcomes the Ukraine’s initial parliament’s adoption of legislation to strengthen the bank resolution framework and looks forward to its final approval, IMF Resident Representative in Ukraine Goesta Ljungman said in a statement. “We also look forward to the adoption of a revised budget for 2020 that will help the authorities to confront the tremendous challenges caused by COVID-19,” IMF’s Ljungman added.

In other words, to get assistance from the IMF and other creditors, Kyiv will need to change the budget and adopt the so-called “anti-Kolomoyskyi” law that makes impossible the return of nationalized banks to their former owners.

The government has already proposed to the Parliament to amend the budget, but the voting of March 30 lacked three votes to pass the amendments. Repeated first reading of the draft law may take place during the next extraordinary sitting.

To compare: the second reading of the land market law that had over four thousand amendments, lasted over two months.

MP of “Golos” (Voice) faction Yaroslav Zheleznyak called the 16 thousand amendments submitted to the banking law an “absolute record” at the Ukrainian Parliament. He has analyzed that neither of the highly debated laws in the past – the Constitutional draft, the Election Code or the land market law, got even half of the amendments introduced to the “anti-Kolomoyskyi” law.

Over 16 thousand amendments were submitted to the draft law that has about 16 thousand words, counted investment banker Serhiy Fursa, making an assumption that “Kolomoyskyi is paying each amendment”.

What comes as a result, the banker proceeds, is an absurd situation in which it will be difficult to find a way out, while the consequences can be catastrophic. “If there is no IMF, we’ll get no money. If there is no money, it will be an economic disaster,” Fursa wrote on Facebook.

The Parliament can consider the draft law at the next extraordinary sitting that will likely take place on April 13.

Who introduced the amendments to the draft law? The biggest number of amendments – over six thousand, was introduced by Anton Polyakov, an MP expelled from the “Servant of the People” party.

Several more MPs that submitted over a thousand amendments each and are also members of the “Servant of the People” party, used to earlier have ties to either “PrivatBank” or to political or media projects linked to Kolomoyskyi.

Among them is, for instance, MP Olha Vasylevska-Smahlyuk who used to work on 1+1 TV channel in the past. She introduced 1,5 thousand amendments to the banking draft law explaining that she wanted to “fix all the Codes so that these Codes function properly.”

Others who contributed with amendments were the MPs of “Servant of the People” party elected in single-member districts of Dnipropetrovsk region: Dmytro Chornyi and Serhiy Demchenko (both linked to Svyatoslav Oliynyk, head of the Dnipropetrovsk Regional Council and Ihor Kolomoyskyi’s close ally). Nearly two more thousand amendments were introduced by MP Viktor Bondar, co-chair of the parliamentary group “For Future” (Za Maybutne).

What does Kolomoyskyi say? Ihor Kolomoyskyi, former owner of the nationalized “PrivatBank” said he has nothing to do with the record high number of amendments collected by the draft law.

“I would call the law not ‘anti-Kolomoyskyi’ but anti-Ukrainian,” the tycoon said in a comment to “Novoe Vremya” (New Times). “Sovereignty and the Constitution are being traded for thirty silver pieces, very expensive ones, though.”

Kolomoyskyi repeatedly spoke in support of default – failure to pay off external loans that, in his opinion, will free the money for domestic needs. In his last flash interview to “Novoe Vremya”, the oligarch said that he is not opting for default but for “restructuring of debts”. He emphasized that he had not discussed the law in question with Zelenskyi. “We have not discussed it at all. People have chosen their way, it’s a road to nowhere and experience of the predecessors – Yatsenyuk, Poroshenko, Hroysman and Honcharuk, proves it,” he said.

Business reacts. Eight leading business associations released a statement emphasizing the urgent need for IMF’s assistance. In a joint declaration, they appealed to lawmakers warning them of the dangerous consequences of rejecting the cooperation with the IMF.

“Assistance from the IMF and other international partners remains nearly the only possibility for the country to keep standing,” said Anna Derevyanko, Executive Director at the European Business Association.

She quoted projected calculations in a scenario when the quarantine is extended for several more months and Ukraine gets the IMF support program. Economy will then decline by nine per cent and hryvnia exchange rate will go up to 35 UAH per one USD. Instead if Ukraine gets no support from the IMF and other organizations, hryvnia’s depreciation can reach 45-65 per cent bringing the exchange rate to 50-80 UAH per one USD.