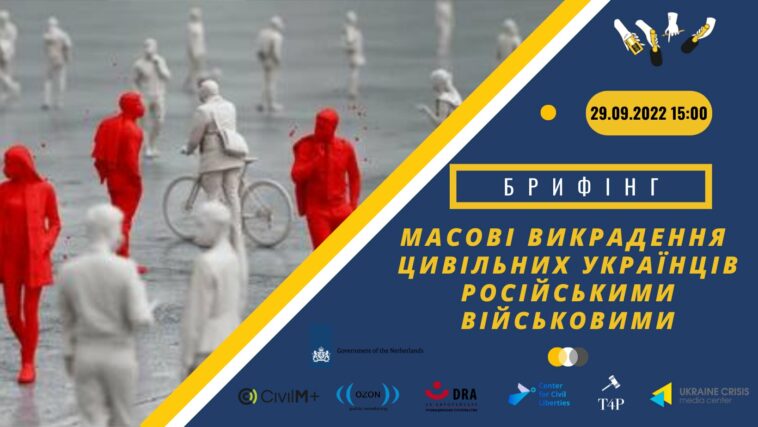 Speakers: Mykhailo Savva, expert of the Center for Civil Liberties;
Anna Popova, CCL’s project manager;
Oleksandr Kononenko, representative of the Representative of the Commissioner for Human Rights in the Security and Defense Sector and Procedural Rights;
special guest, an activist released from captivity

The Center for Civil Liberties (CCL) and the Ukrainian Crisis Media Center (UCMC) invite journalists to a briefing to discuss the issue of mass abduction/detention of Ukrainian civilians by the Russian military. The scale of the problem allows us to talk about a purposeful policy of the Russian authorities aimed at destroying the most active part of Ukrainian society.
Experts and human rights defenders will discuss various aspects of this large-scale problem, how to safely report a missing person and what to do to free Ukrainians.

Accreditation for media: Anna Trushova, [email protected]
Registration via the link: https://forms.gle/sRM1SjNeeiW85G727Languages: Ukrainian and English (translation will be provided). The event will be broadcast on the web resources of the Ukrainian Crisis Media Center and the Center for Civil Liberties. Also, feedback to the speakers and the moderator will be provided on the UCMC and the Center for Civil Liberties social media platforms.You can ask your question during the event itself in the comments to the broadcasts:
https://www.youtube.com/c/UkraineCrisisMediaCenterOnline
https://www.youtube.com/c/UACrisisMediaCenter (broadcast in English)
https://www.facebook.com/uacrisis.ua
https://www.facebook.com/ccl.org.ua

Since the full-scale invasion began, Russia has mass kidnapping Ukrainians in the occupied territories. The number of Ukrainians who became civilian hostages in the Russian Federation is currently difficult to determine.Only the Center for Civil Liberties database contains information on more than 650 civilian hostages.

Separately, we have to note evidence of the purposeful policy of the Russian authorities to destroy the proactive part of Ukrainian society, the so-called “denazification.” This is the cynical kidnapping, abuse, and detention of human rights defenders, activists, representatives of religious communities, and local self-government.

The Center for Civil Liberties, together with the Euromaidan SOS initiative, created a Map of violent disappearances of human rights defenders, journalists, activists, and representatives of local self-government bodies.With the help of the Map, basic information on the state of pressure on civil society by time and regions is displayed, which is constantly updated and supplemented.”Center for Civil Liberties” provides information on several cases of abduction of Ukrainian citizens. According to our report, Ukrainian civilian hostages are illegally held in places of deprivation of liberty and tried on trumped-up charges. Yes, it is known that the athlete Andriy Golubev, who was kidnapped from Melitopol and is being held in the Lefortovo pre-trial detention center, is accused of “terrorism” simultaneously; he is not allowed to have a lawyer. He is not being provided with qualified assistance.