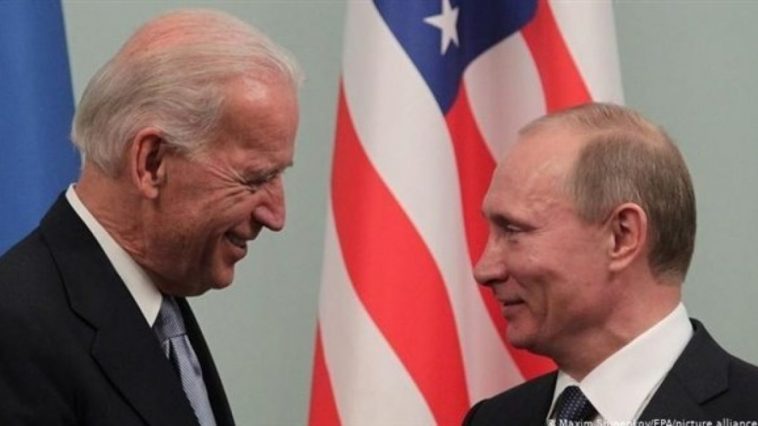 On June 16, 2021 the U.S. President Joe Biden met with the Russian President Vladimir Putin. Ukraine closely followed the preparations to the summit and the separate news conferences of the two leaders after the meeting. Ukraine hoped that its affairs were on the meeting agenda as the agreement of the two leaders to meet was made against a backdrop of Russia’s military build-up near the Ukraine border in April 2021. Where did the Ukraine question stand? What did the two leaders say on Ukraine? What should Ukraine expect? Read on.

The long-awaited meeting between Joe Biden and Vladimir Putin took place at the Villa la Grange in Geneva on June 16. The talks took about four hours, an hour less than planned. The presidents had a one-on-one meeting and an expanded one.

Ahead of the Geneva summit, both parties underscored that they wanted to stabilize and normalize the relationship between the two nations. Arms control, action against ransomware attacks, cybersecurity, and climate change were announced by the White House and the Kremlin as top themes to be addressed.

The Biden administration also said it planned to bring up Russia’s military incursion in Ukraine, persecution of the Russian opposition leader Alexei Navalny, and the U.S. attacks by Russian hackers.

Earlier this month, President Biden had a telephone conversation with President Zelenskyi. Biden affirmed the United States’ “unwavering commitment to Ukraine’s sovereignty and territorial integrity”. The office of the President of Ukraine said Biden reassured Zelenskyi that Ukraine’s position will be taken into consideration during the summit with Vladimir Putin.

The U.S.-Russia relations are at a low point. In the spring, the U.S. imposed new sanctions on Russia, and both countries recalled their ambassadors. Biden called Putin a “killer”, and the latter dismissed the comment as “verbal indigestion”.

“I would avoid having great expectations,” Hanna Shelest, Director of Security Programs at Foreign Policy Council “​Ukrainian Prism” told the BBC. “Setting the expectations of this meeting too high would be the biggest mistake, including on the Ukraine question,” Hanna Shelest added.

The Biden administration made it clear that the U.S. seeks “a stable and predictable” relationship with Russia,  Alyona Hetmanchuk, director of the New Europe Center told the BBC’s Ukrainian Service.

“It’s very important to Ukraine that Biden warns Putin of the concrete fallout if his further aggressive actions against Ukraine persist. (Ukraine also expects) that he sends a clear message: under the Biden’s presidency, the U.S. will not make decisions or act against the interests of its long-term partner, Ukraine,” Hetmanchuk said.

Different expectations from the start. The statements that both parties released ahead of the meeting highlighted how different the expectations of the White House and the Kremlin were.

Putin said he expected to touch on arms control, countering terrorism, containing the pandemic, and environmental problems. He also mentioned the Middle East, but did not say a word about Ukraine.

Biden underscored the themes that Russia would seek to avoid. In an opinion piece for the Washington Post, Biden said he will discuss with Putin Russian cyberattacks on the U.S. critical infrastructure, and Russia’s aggression in Ukraine.

“There will be no doubt about the resolve of the United States to defend our democratic values, which we cannot separate from our interests,” President Biden said.

He also said that human rights violations in Russia and jailing of the opposition leader Alexei Navalny are on the meeting agenda.

Those differences as well as mutual attacks are not occasional, said political analyst Volodymyr Fesenko.

“Both sides are ready and willing to negotiate, but they also demonstrate that they are in the power position, and will not compromise,” Fesenko said.

What did Biden say about Ukraine? “The United States would maintain an unwavering commitment to the sovereignty and territorial integrity of Ukraine,” President Biden said at a news conference that followed the four-hour talk with Putin in Geneva.

“We agreed to pursue diplomacy related to the Minsk agreement,” he added.

When it came to Ukraine, Putin reportedly “didn’t disagree with what happened. He just has a different perspective (on) what to do about it,” Biden noted.

Those differences are predictable as Ukraine and Russia give different meaning to the Minsk agreements.

What did Putin say? Speaking at a news conference, President Putin confirmed that they touched on Ukraine.

“We touched on the theme (the Ukraine question), not in detail though,” Putin said.

Minsk agreements need to be central to the peace settlement, Putin said at the news conference explaining how he understood Biden’s position.

“Our sole commitment on Ukraine is to facilitate the implementation of the Minsk agreements. If the Ukrainian side is willing to do that, we will undoubtedly take this path,” he added.

At the same time, Ukraine’s actual proposals on the peace settlement in Donbas “have nothing to do with the Minsk agreements,” the Russian President emphasized.

Putin demonstrates that Russia sees the Minsk agreements as a pressure tool to force Ukraine into changing its form of government (through amending the Constitution and integrating the eastern territories while accepting Russia’s de facto control over them). Russia uses blackmail to create security threats and achieve its goals.

“So, what other commitments can Russia make?” Putin said. He added that they briefly touched on Ukraine’s possible NATO membership and “there was nothing to discuss.”

What’s next? There have been no breakthroughs in the Ukraine question. Following the Biden-Putin meeting in Geneva, Ukraine’s Foreign Minister Dmytro Kuleba had a telephone conversation with the U.S. Under Secretary for Political Affairs Victoria Nuland.

“The U.S. diplomat said that President Biden reaffirmed to the Russian President the U.S.’s unwavering commitment to the sovereignty and territorial integrity of Ukraine. Victoria Nuland also underscored the United States’ resoluteness in respecting the principle ‘Nothing about Ukraine without Ukraine’ in talks with Russia or other stakeholders,” the statement released by Ukraine’s Foreign Ministry reads.