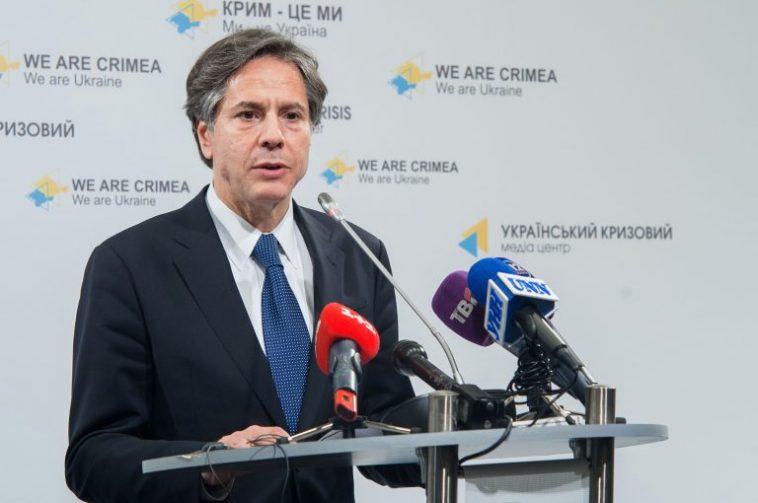 On Thursday, May 6, 2021, the U.S. Secretary of State Antony Blinken visited Ukraine. Donbas, Nord Stream 2, and Ukraine’s reform path were some of the topics Blinken discussed with President Zelenskyi of Ukraine. At the same time, Blinken underscored the importance of anticorruption efforts for the reform progress in Ukraine. The U.S. Secretary of State also met with speaker of the Parliament Dmytro Razumkov and heads of the factions. Here are the key messages and visit outcomes as seen by the Ukrainian media – BBC News Ukrainian, Ukrainska Pravda and more.

U.S. Secretary of State Antony Blinken is the first representative of the Biden administration visiting Ukraine. On one hand, he reconfirmed the U.S.’s resolute support to Ukraine as the country is countering Russian aggression. On other hand, he made it clear that Washington disapproves of the current reform pace and the power that oligarchs have in Ukraine.

That’s not Blinken’s first visit to the country. He served in the administration of Bill Clinton, George W. Bush, and Barack Obama. Blinken was national security advisor to vice president Joe Biden in the Obama administration. In 2014, when the armed conflict in Donbas broke out, Blinken served as principal deputy national security advisor to President Obama, he later served as deputy secretary of state.

Between 2009 and 2017, Blinken visited Ukraine many times. He negotiated with the government, and advised on Ukraine and Russia’s policy on Ukraine.

In 2014, Blinken was one of the first U.S. diplomats to affirm that the U.S. is considering a possibility to supply lethal weapons to Ukraine in order to support the country in the conflict with Russia.

In March 2015, during his visit to Kyiv, Antony Blinken met with the Ukrainian state leaders, and spoke in quite a frank manner to journalists. The U.S. is strongly committed to the future and success of Ukraine, he then said. “Borders cannot be changed by force from the outside. It sets a terrible precedent for the whole world,” Blinken proceeded.

The visit of the U.S. Secretary of State happening against a backdrop of the build-up of the Russian troops at the Ukraine border, sends an important signal, political experts say. Ukraine is the first Eastern European country visited by a high-level U.S. official from the new administration.

Blinken’s Ukraine agenda included meetings with the government, opposition, civil society, and Metropolitan Epiphany, the head of the Orthodox Church of Ukraine.

Public meetings were held in cordial atmosphere. President Zelenskyi officially invited President Biden to Ukraine. At the same time, during the press conference that recapped Blinken’s meeting with Zelenskyi, the U.S. Secretary of State gave to understand that the present pace of reforms and anti-corruption efforts in Ukraine is not enough.

Meetings with the FPs, and the church. The meeting with the Foreign Affairs Minister of Ukraine Dmytro Kuleba opened the visit agenda. Later, Blinken laid flowers to the memorial to fallen military in Donbas, together with foreign minister Kuleba and Metropolitan Epiphany. He also visited the Mykhailivskyi Cathedral.

Ukraine’s national security and Russian aggression were in focus during Blinken’s meeting with head of the Parliament Dmytro Razumkov, and heads of parliamentary factions including former President Petro Poroshenko.

According to the press service of the “Servant of the People” (Sluha Narodu) party, Blinken asked to approve Kristina Kvien’s nomination as Ambassador to Ukraine, she currently serves as Chargé d’Affaires, a.i.

The joint press conference was short. But the highlighted themes ranged from Russia’s military pressure to reforms and further bilateral cooperation.

“We discussed the issues not just of our occupied territories and the illegal annexation of Crimea by the Russian Federation, but also Nord Stream 2. This is of utmost importance and a very sensitive issue for Ukraine,” President Zelenskyi said. “Some things (reforms) we have achieved, some where we have covered part of the distance, but the meeting has been very essential and significant. We hope that this is going to be a fundamental year of our bilateral relations,” he proceeded.

Both Zelenskyi and Blinken said that Russia had partially withdrawn its troops from the Ukraine border, but the threat remains.

“Russia has the capacity on fairly short notice to take aggressive action if it so chooses, and so we are watching this very, very carefully,” warned Secretary Blinken. He underscored the U.S.’s unwavering support to Ukraine’s sovereignty and territorial integrity.

Russia is not the only threat Ukraine faces, Secretary Blinken emphasized: “Ukraine faces twin challenges: aggression from outside coming from Russia, and in effect, aggression from within coming from corruption, oligarchs, and others who are putting their interests ahead of those of the Ukrainian people. And these two things are linked because Russia also plays on that internal aggression, using corruption and using individuals to try to advance its interests as opposed to those of the Ukrainian people.”

Blinken called to proceed with the reforms. He said independent anticorruption board, judiciary and security service reforms were some of the important targets discussed.

The meeting was not public. Still, executive director of the Anticorruption Action Center Daria Kaleniuk revealed some points.

“Blinken’s key message was: the level and quality of the U.S. support to Ukraine directly depends on implementation progress of the good governance and anticorruption reforms. The IMF is the indicator,” Kaleniuk wrote.

She said the U.S. Secretary of State “was not hiding his shock” after the change of the Naftogaz head in violation of the procedure last week.

“The judicial reform will be emblematic. Its success will depend on involvement of independent international experts into cleansing of the judicial self-government,” Kaleniuk added.

What do experts say? Analysts agree that the visit is important for Ukraine. At the same time, it should not be overestimated, said Oleksiy Melnyk, co-director of foreign relations and international security programmes at the Razumkov Center.

“That was rather a planned visit,” he explains. “As the new administration is gaining speed, physical visits to key countries and regions are part of the plan.”

Statements on the U.S. support to Ukraine in the conflict with Russia, and calls to proceed with reforms and eradicate corruption are not new.

On other hand, when said in person, those messages are more convincing, notes political analyst Volodymyr Fesenko.

“It proves that Ukraine is a priority within the U.S. foreign policy. It also proves that we have solid support in the present fight against Russia,” Fesenko explains.