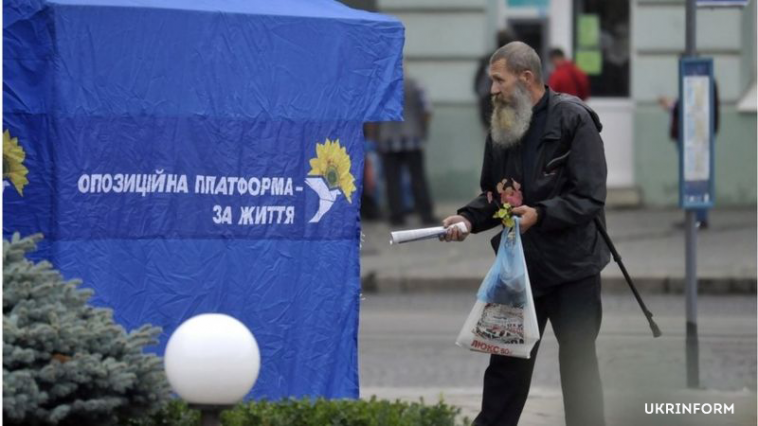 In mid-2021, the old and the new pro-Russian parties in Ukraine entered turbulent times. As soon as President Volodymyr Zelenskyi started shaping the politics with sanctions of the National Security and Defense Council, particularly the sanctions against Medvedchuk, the parties relying on the voters in the east and south took a hard hit. This week, court has extended pretrial house arrest to Viktor Medvedchuk who was charged with treason. While action against Medvedchuk has weakened his political force, the voters’ demand it used to respond to stays. Ukrainian media outlet “Ukrainska Pravda” (Ukrainian Truth) has analyzed the the structure and dynamics of pro-Russian forces in Ukraine. Here are the highlights of the analysis.

2014: decreased approval of pro-Russian forces against a backdrop of war. Russia’s illegal annexation of Crimea and the occupation of Donbas shook the established balance of voters’ preferences in the country.

From the times of the first elections in 1991 until the 2012 elections, there were as many pro-Western voters in Ukraine as pro-Russian ones. After the Russian aggression, pro-Russian parties lost a few million supporters all at once.

“Voters in Ukraine can be split in groups: 40-45 per cent form the national-patriotic group. Some 30-35 per cent are critical of the government and can be targeted by pro-Russian parties. In between, there are 20 per cent of undecided voters,” the sociologist explains.

Russia’s aggression narrowed the electoral base of the parties that used to lobby Russia’s interests in Ukraine and encourage rapprochement between Kyiv and Moscow.

Most recent surveys released in June find that the only pro-Russian party that has chances to be elected is the “Opposition Platform – for Life” (Opozytsiyna Platforma – Za Zhyttia).

“Opposition Platform – for Life” is composed of two large groups – the wing of Medvedchuk and Rabinovych, and the wing of Lyovochkin and Firtash.

The party has two public leaders – Viktor Medvedchuk positioned as the Kremlin’s ally, and Yuriy Boiko assuming the role of a “robust administrative manager”, commonly exploited by Yanukovych.

There was hostility between the two groups, they even competed for authority within the party. The competition ended as soon as the National Security and Defense Council imposed the sanctions on Medvedchuk.

“We now have to lean toward Lyovochkin,” an unnamed ally of Medvedchuk told “Ukrainska Pravda” shortly after the rollout of the sanctions.

However, not only Medvedchuk’s image, but the entire party took a hit from sanctions. In December 2020, the party’s approval rating topped 20 per cent. In March 2021, as the sanctions went into effect, it decreased to about 14 per cent.

The present approval rating of the party nears 12-13 per cent, latest surveys find.

“There is a demand for the ‘strong hand’ of a Soviet-type manager – that’s not a problem that they steal, if they make something for the community. Remember, how many corruption scandals linked to (mayor) Kernes broke out, but Kharkivites only seemed to like him more,” said Oleksiy Antypovych, head of the sociological group Rating.

To the voters in the south and east, rapprochement with Russia is not as important as salaries, pensions, utility bills, and social justice, the sociologist proceeds. While the calls for friendship with Russia stay at the background, they have lost priority in the past years due to Russia’s actions in the first place.

Demand for changes and fresh faces. Even conservative voters in the south and east want changes. Younger voters are more prone to choosing new politicians and projects, surveys find.

With the crisis of trust in the new President and his party “Servant of the People” (Sluha Narodu) looming in 2019, the virtual party of the Spain-based blogger Anatoiy Shariy started gaining support of the pro-Russian electoral base. The party’s voters are young – 32 per cent are ages under 30, and 44 per cent are ages 30 to 44.

After Medvedchuk and his televisions channels took a hit in early 2021, the approval rating of a former “Opposition Bloc” member Yevhen Murayev increased.

It has been high in the past months: from two to four-five per cent, pollsters say. Murayev’s electoral base is also rather young, those are voters ages 30 to 59, deputy director of the Kyiv International Institute of Sociology Anton Hrushetskyi says.

Despite targeting a similar group of voters, Shariy and Murayev respond to different demands, Antypovych of the Rating group notes.

“Shariy is a virtual figure. His audience is his voters, those are active young people. Murayev responds to the demand for rejuvenation within what used to be the ‘Party of Regions’,” the sociologist says.

All the above political projects hardly cover half of the potential of the 35-per-cent segment of pro-Russian voters. In other words, one-in-two voters in the south and east are either looking for a different political force to support, or are undecided who to vote for.

One of the political projects drawing on the popularity of the former “Party of Regions” can be the party “Ukraine Is Our House” (Ukraina – nash dim) of Borys Kolesnikov, Vice Prime Minister in Azarov’s government under Yanukovych’s presidency.

The project is often referred to as Akhmetov’s new enterprise, but the oligarch has neither financed nor contributed to it, “Ukrainska Pravda” found.

Initially, Kolesnikov denied his party-building efforts, but later acknowledged them.

He now readies for the launch of the party, Kolesnikov told “Ukrainska Pravda”.

“That’s a work in progress. No news will come out before the Independence Day,” Kolesnikov said hinting that his political force will be publicly presented on August 24. On the day that marks the 30th anniversary of Ukraine’s independence a new pro-Russian political force can emerge.