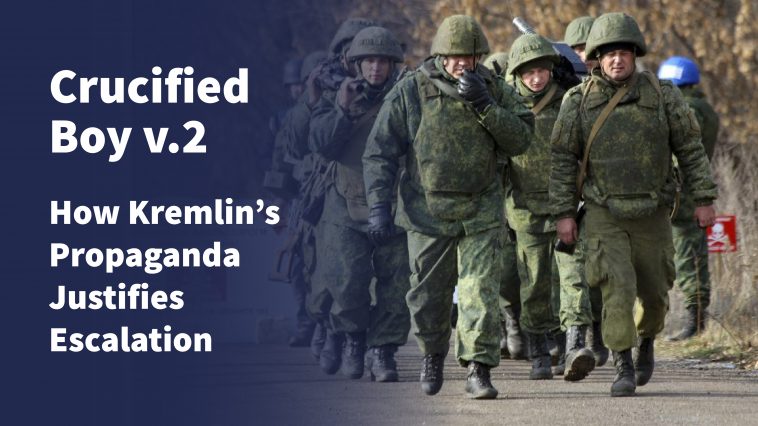 In a manner typical for the hybrid warfare, the recent escalation of Russian aggression in the eastern Ukraine was preceded and is accompanied by a number of information operations. Having drawn up military – Ukrainian General Staff of the Armed Forces estimates that 28 Russian tactical battalion groups currently at the border will be accompanied by 25 more military units – and refusing to restore ceasefire on April 1, the Kremlin actively blames Kyiv. The ongoing campaign that lasts several weeks has reached its peak with accusations voiced on April 3 claiming that the strike of a Ukrainian unmanned aerial vehicle (UAV) has killed a child in the occupied territories.

Such an announcement was first made by the “people’s militia” in the Kremlin’s puppet “Donetsk People’s Republic” (DNR). It was immediately picked up and amplified by Russian state-controlled media – with varying details regarding the age and gender of the presumed victim – and by pro-Russian media in Ukraine, including the key web-site Strana.ua that often serves as a hotspot of Russian disinformation.  As of April 5, no official information has been released. Denis Pushilin, head of the so-called “DNR”, was invited to talk about the issue on air of one of the most popular Russian propaganda talk-shows “Evening with Vladimir Solovyov”. Interestingly, with the TV-host explicitly blaming Ukraine for the alleged tragedy he did not seize an opportunity to fully confirm the version about UAV, saying instead that “experts” are working to establish the facts, which further underlines doubts regarding the original theory. He also did not provide any details about the allegedly killed child.

This may be explained by the easiness with which the fake can be debunked. Representatives of StopFake have decided to check another theory – that the child has indeed died in the occupied territories, but due to the explosion. Such information was spotted in the local social networks regarding the case. StopFake reached out to the people from Oleksandrivske (a town where the alleged victim is from), who confirmed that the death of a child was caused by a tragic incident due to one of the locals collecting mines and other ammunition supplies which the child in question has found. Moreover, Oleksandrivske is located at the distance of 30 kilometers from government-controlled territories, which makes it impossible for Ukrainian UAV to even make such a strike. Some outlets claim that the tragedy took place in a town with a similar name, Oleksandrivka, which is considerably closer to the frontline.

Nevertheless, Russian propaganda is already in full swing with the case being used by the Kremlin’s officials to call for further aggression and pressure against Ukraine. In particular, Chairman of the State Duma Vyacheslav Volodin insists that

“The issue should be raised of excluding this state [Ukraine] from the Council of Europe”.

Leonid Slutsky, Chairman of the Committee on International Affairs of State Duma, further spins the fake, claiming that

“Kyiv wages a fratricidal war by sending bombs with inscriptions “To the children of Donbas” to the south-east of Ukraine”.

The fake is already widely spread, published by a network of Russian and pro-Russian media and being a subject of political discussion.

This is not the first case Russian propaganda exploits the idea of a killed child to foment hostility towards Ukraine. The notorious case of the “crucified boy” from Slovyansk, spread by the Russian Channel 1 in 2014, is the most well-known example of this tactic. An emotionally strong manipulation makes it easy to attack the state of Ukraine and justify Russian aggression. Amidst the recent escalation some experts perceive the recent case as a potential casus belli – a justification for the Kremlin to intensify its attacks. In any case, it fits the traditional pattern of Moscow’s political behavior marked by the tendency to escalate tensions and then offer a demoralized opponent, struggling with internal consequences of attacks, including information ones, a chance for negotiations – on the Kremlin’s terms.