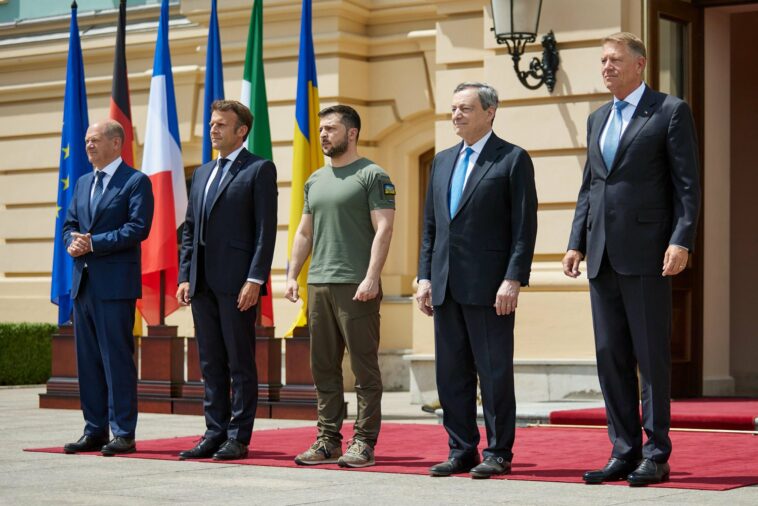 France pledged to send six more Caesar self-propelled artillery systems to Ukraine that proved to be effective in fighting against Russians. Ukraine received 12 Caesar artillery systems in May. President Macron said he is hopeful that the EU countries will grant Ukraine candidate status in a unanimous vote.

“My colleagues and I came here to Kyiv today with a clear message: Ukraine belongs to the European family,” the German Chancellor Olaf Scholz said during a joint press conference. Germany supports a positive decision in favor of Ukraine and Moldova, the Chancellor added.

“Germany already broke a tradition and began to send weapons to Ukraine. We will continue to do so, as long as Ukraine needs it. We train Ukrainian service members in using modern weapons,” he said.

Ukraine’s losses on the front line mount. Up to 1,000 Ukrainian soldiers are being killed or wounded each day in Donbas, with 200 to 500 killed on average and many more wounded, head of the faction “Servant of the People” (Sluha Narodu) Davyd Arakhamia said, as quoted by Axios.

Over the past two weeks that number has climbed significantly, he added. What Ukraine lacks, Arakhamia contended, is the weaponry and ammunition to match Russia in “one of the biggest fights of the 21st century.” He said: “We have the people trained to attack, to counterattack, but we need weapons for this.”

U.S. Joint Chiefs Chairman Gen. Mark Milley was asked about the rate of Ukrainian casualties on Wednesday and said it was difficult to estimate but previous media reports of around 100 killed and up to 300 injured each day had been “in the ballpark of our assessments.”

President Volodymyr Zelensky said on June 1 that 60 to 100 Ukrainian troops were being killed daily, 500 more were being wounded.

On June 9, Advisor to the President’s Chief of Staff said that 100 to 200 Ukrainian soldiers are dying each day. He said that the “complete lack of parity” between the Russian and Ukrainian armies was the reason for Ukraine’s heavy casualty rate.

Ukraine in Flames #98: China – Russia relations and impact of the Russian war

How important is the “Chinese factor” of the Russian war against Ukraine – and what does it even mean? How to make sense of the bilateral relations between Beijing and Moscow and their impact on the hostilities unleashed by Russia on Ukrainian soil? There is little doubt that China watches developments in Ukraine very closely, learning the lessons and evaluating the possibility of military action against Taiwan. However, we don’t have enough clarity beyond this, so Ukraine In Flames #98 explores how and why China amplifies selective Russian disinformation, the forms and level of Chinese support for Russia, what is this support driven by and what should the world do to prevent this support from growing.

Yurii Poita, Head of the Asian section at the New Geopolitics Research Network