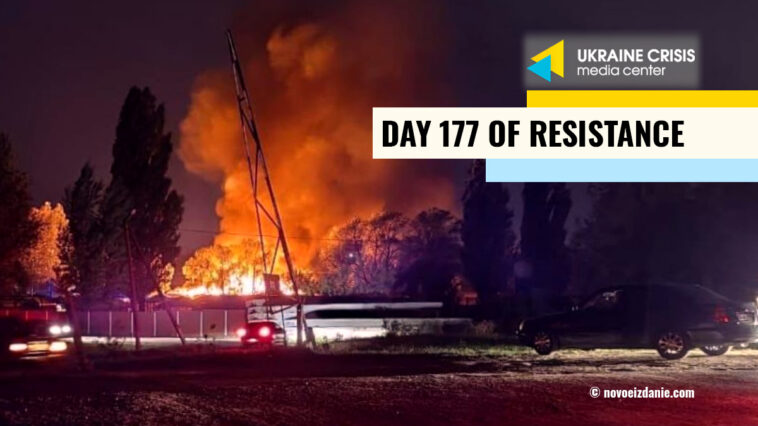 Late in the evening on August 18, a series of explosions went off in the area of Kerch and the Belbek airfield outside Sevastopol, a major Russian air base on the occupied peninsula.

As of this writing, there are no reports clarifying impact of the explosions. Yet even an attempted attack on a key Russian airfield demonstrates that Russian military sites in Crimea are no longer are beyond Ukraine’s reach.

The Belbek airfield is located 25 km away from Sevastopol, near Fruktove village (that was called Belbek until 1945, named after a river in the south west of Crimea). The original dirt runway was constructed in 1941. After World War II, the runway was built in concrete.

In the Soviet times, Belbek was a military air base. In the late 1980s, the runway was upgraded to handle the aircraft of then-Secretary General Mikhail Gorbachev who travelled to his summer house in Crimea’s Foros.

On March 4, 2014, Ukrainian Colonel Yuliy Mamchur marched with about 50 unarmed Ukrainian servicemen toward the Russians who blocked the airfield and passage to the military unit A-4515. The Ukrainians sang the anthem carrying their regiment’s banner and a Ukrainian flag. The armed Russian forces did not dare to open fire on them.

The footage of the standoff was released by a number of foreign media and became emblematic of Ukraine’s resistance. Following negotiations, Colonel Mamchur and his soldiers temporarily regained control of the military sites around the Belbek air base, military depots in particular. Mamchur was briefly taken prisoner by the Russians who pressured him to surrender and side with them. In the spring of 2014, he and his unit left the Crimea staying true to the oath. Part of the brigade later based in Mykolayiv.

Since the early days of occupation, Russia turned Belbek into its military air base. The airfield stopped servicing passenger flights.

Since Russia’s full-scale invasion of Ukraine on February 24, 2022, Russia made Belbek a major strategic site in Crimea.

Russian aircraft take off from the airfield to launch missile strikes on Ukrainian cities. Russia uses Belbek alongside other airfields in Crimea, Russia and Belarus.

Demilitarized and deoccupied Crimea is an item on Ukraine’s agenda, Secretary of the National Security and Defense Council Oleksiy Danilov said. “Crimea is the sovereign territory of Ukraine. On the agenda is a step-by-step demilitarization of Crimea followed by its deoccupation,” Danilov twitted.

Crimean collaborators and traitors may shorten their future prison terms by informing Ukraine’s defense forces of the Russian military sites and weapons in the temporarily occupied Crimea, Danilov added.

“There is information that the Russian occupying forces are planning to stop working power units in the near future and disconnect them from the communication lines supplying power to the Ukrainian power system,” the company said.

The Russian military is looking for suppliers of fuel for diesel generators, which must be turned on after the shutdown of power units and in the absence of external power supply for nuclear fuel cooling systems, Energoatom stated.

On August 19, only operative personnel were let into the station, the company added.

Sponsor of terrorism. Will Russia receive the status of rogue state? Ukraine in Flames #161

Russia’s blatant violations of international humanitarian law and aggressive neo-colonialism are now a threat not only to Ukraine and its Western allies but to the whole free world. Watch Ukraine in Flames #161 to know why Russia has to be declared a state sponsor of terrorism and how it can help Ukraine in its war for freedom