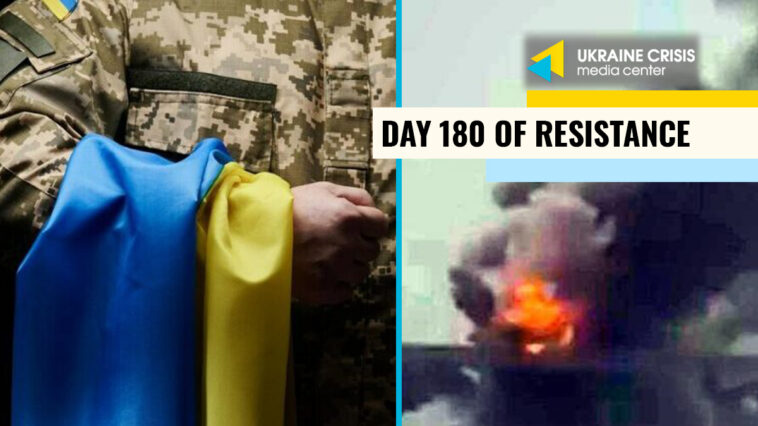 It is not only service members and those who took up arms are fighting the war, but also “our little children whose only fault is that they were born here, at this time,” the Ukrainian commander-in-chief said as he spoke at the veterans forum “Defenders. Roll Call” on Monday, August 22.

“Their father went to fight and is possibly one of the 9,000 heroes who were killed,” Zaluzhnyi said, as quoted by Interfax Ukraine.

In the beginning of August, advisor to the Chief of Staff of the President Mykhailo Podolyak said that the losses of the Ukrainian Armed Forces were three times lower than what they were in early June.

Ukraine is losing 30-50 soldiers every day, he said, while in the beginning of June, the numbers reached 100-200 soldiers a day.

Ukraine’s high casualty rate emerged during the second phase of the war – an artillery position war. All kinds of weapons rained down on the Ukrainian positions.

Since the full-scale invasion, Russia has lost about 45,400 soldiers, of which 200 in the past day, the General Staff of the Ukrainian Armed Forces said. Yesterday, the Russian forces took the heaviest losses on the Donetsk axis.

Antonivskyi bridge in Kherson possibly broken in half

The latest Ukrainian strike against the Antonivskyi bridge literally “broke it in half”, a voice message posted to a social media group of Kherson on August 22 said.

Some of the debris of the bridge fell as far as in the nearby village of Antonivka. About ten Kamaz trucks with ammunition were moving along the bridge as the strike hit it, unconfirmed reports said. The ammunition possibly detonated. As of this writing, official confirmation did not follow. A photo captured a powerful explosion that followed the strike.

The Russian forces do not cease attempts to restore the Antonivskyi bridge and the bridge across the Kakhovska hydropower plant, both subject to regular attacks.

On the night of August 19 into August 20, Daria Dugina (Platonova), a daughter of “Putin’s ideologist” Aleksandr Dugin, was killed in a car bombing outside Moscow. Dugina, like her father, worked to spread the Russian propaganda, justified Russia’s war in Ukraine, and called for the genocide of the Ukrainian people.

The Russian Investigative Committee confirmed Dugina’s death and opened a probe into her killing. An explosive device was possibly planted in the car.

The Kremlin’s propagandists blame Ukraine for the killing of a daughter of Putin’s ally, demanding to strike against “the decision-making centers” in Kyiv in retaliation for her death, including the Office of the President and the central office of the Security Service.

Advisor to the Chief of Staff of the President Mykhailo Podolyak denied Ukrainian involvement in the car bomb incident.

Former MP of the Russian Duma Illya Ponomarev alleged the explosion was the work of the National Republican Army, a partisan group that calls Putin a usurper of power and war criminal, and repeat the propaganda’s statement on Ukraine and Russia being “brotherly nations”.

According to the FSB’s version, on July 23, Vovk allegedly travelled to Russia with her 12-year-old daughter. They rented an apartment in the house in Moscow where Dugina lived.

Dugina was followed by a Mini Cooper car that changed the plates three times, FSB proceeds. On the day of the bombing, Vovk and her daughter went to the festival attended by Dugina.

After accomplishing a guided bombing of the car, Vovk and her daughter allegedly left to Estonia through Pskov region, FSB said.

Ukrainian journalist Denys Kazanskyi underscored the absurdity of the version. “Natalia Vovk (Shaban) was on the wanted list since April 13. FSB gives no explanation of how she was able to freely enter Russia and later leave to Estonia. If a horrible terrorist can easily travel to Russia, commit a crime and leave – than the security service has a problem, or FSB covered her and worked with her as a team,” Kazanskyi said.

Road to Donbas. Life in occupied part of Kharkiv region. Ukraine in Flames #164

Kharkiv region is of special strategic importance for Russia, as it was supposed to become the bridgehead for the offensive on Donbas. While the Ukrainian defenders are holding the line and not letting the enemy make a breakthrough, the Russians are taking their revenge on the civilians terrorizing them with constant shelling attacks and committing mass war crimes in the occupied territories. Learn how the Kharkiv region is surviving and resisting the Russian occupation in Ukraine In Flames #164.