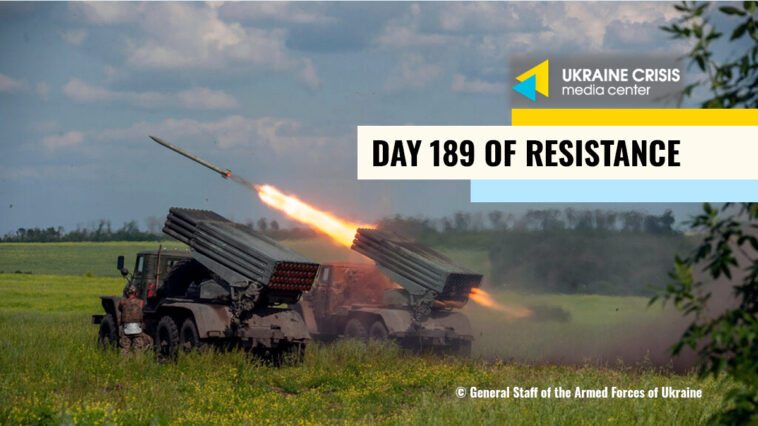 The Ukrainian troops went on the counteroffensive in the south and gained success in three areas of the occupied Kherson region, deputy head of the Kherson regional council Yuriy Sobolevskyi said on television.

“I can confirm that the Ukrainian Armed Forces have had success in the districts of Kherson, Kakhovka, and Beryslav,” he said.

It’s up to the Ukrainian military command to provide further details of the operation, Sobolevskyi added. He also called on the Ukrainians to keep silent about the successes of the Ukrainian Armed Forces, and support them instead.

Some of the collaborators fled from Kherson region following the attacks by the Ukrainian troops, Sobolevskyi said.

Ukrainian counteroffensive explained by Institute for the Study of War

The Ukrainian counteroffensive is a cohesive process that will require some time to correctly execute. The Kremlin will likely exploit the lack of immediate victory over Kherson or Ukrainian operational silence on the progress of the Ukrainian counteroffensive to misrepresent Ukrainian efforts as failing and to undermine public confidence in its prospects, the Institute for the Study of War (ISW) said in a report of August 30.

Ukrainian forces began striking Russian pontoon ferries across the Dnipro River on August 29, which is consistent with the start of the Ukrainian counteroffensive, ISW said. The effects of destroying ferries will likely be more ephemeral than those of putting bridges out of commission, so attacking them makes sense in conjunction with active ground operations.

Ukrainian forces have long undertaken efforts to destroy Russian ground lines of communication (GLOCs), ISW said, prior to the announcement of the counteroffensive operation, which likely indicates that Ukrainian forces are committed to a long-term effort – composed of both strikes and ground assaults. Ukrainian strikes on Russian GLOCs disrupt the Russians’ ability to supply and reinforce their positions with manpower and equipment, which will assist Ukrainian ground counteroffensives, the Institute for the Study of War stated.

IAEA sets off for Zaporizhzhia plant

A convoy of vehicles carrying a mission of the International Atomic Energy Agency (IAEA) set off from Kyiv to the Zaporizhzhia nuclear power plant on the morning of August 31. It is not clear yet when the IAEA team will reach the station.

The mission team of 14 members arrived in Kyiv on Tuesday. Discussions on a possible visit by the IAEA to the Zaporizhzhia nuclear power plant began in mid-August, when Russia intensified attacks on the plant.

At about 3p.m., the IAEA mission arrived in Zaporizhzhia. The occupying forces refused to issue them passes, the BBC’s Russian service said. The delegation was waiting at a checkpoint in Ukraine-controlled territory. The Russian state news agency TASS said the mission will arrive at the plant on September 1.

The Russian forces began to shell Enerhodar, a satellite city of the Zaporizhzhia nuclear power plant, to create a picture for the inspectors, head of the Nikopol regional military administration Yevhen Yevtushenko said.

The mission will stay at the occupied plant for a few days, and the duration can be extended, IAEA director-general Rafael Grossi said. His team is on a technical mission to prevent a nuclear disaster, he added.

While Russian missiles fire at Ukrainian cities, the Kremlin propaganda keeps attacking Europe trying to justify the war and stop the support of Ukraine. Watch Ukraine in Flames #174 to know how Russia disseminates its propaganda and anti-Ukrainian sentiments in Bulgaria, trying to shift the blame for the Russian-Ukrainian war and the rising prices for food and fuel from the aggressor to the victim.