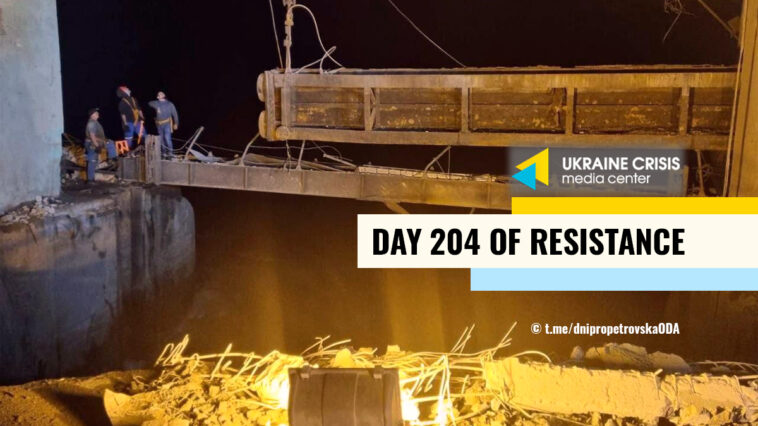 On the evening of September 15, the Russian troops conducted another missile strike on Kryvyi Rih. An air raid alert was declared in all of Ukraine except in Crimea.

The strike hit the water facilities again, head of the Dnipropetrovska regional military administration Valentyn Reznichenko said. There were no casualties, preliminary reports said. Rescue workers are on the site of the attack.

After the missile strikes on Kryvyi Rih, the water level in the Inhulets River rose, and a total of 112 apartment buildings and private houses were flooded. The Russian forces hit a water pumping station, causing water outages in some towns and villages.

To fix the destruction caused by a Russian missile strike on the dam of the Karachunivske reservoir near Kryvyi Rih, works went on all night, and two sections of the dam were blown up. The water level in the Inhulets River slightly fell.

The Russian forces likely targeted Ukrainian hydrotechnical infrastructure to interfere with Ukrainian operations across the Inhulets River, the Institute for the Study of War said in a report covering September 14. “Footage of the aftermath of the strike shows a 2.5m increase in the water level of the Inhulets River, which runs south of Kryvyi Rih and is an important geographical feature for the ongoing Ukrainian counteroffensive along the Kherson-Mykolaiv border,” the report said.

Wagner Group financier Yevgeny Prigozhin is being established as the face of the Russian “special military operation” in Ukraine, the Institute for the Study of War said in a report, citing a recent video that shows Prigozhin giving a recruitment speech to Russian prisoners.

On Thursday, the International Atomic Energy Agency’s 35-nation Board of Governors passed a resolution demanding that Russia end its occupation of the Zaporizhzhia nuclear power plant in Ukraine.

The resolution passed by a vote of 26 to two (Russia and China), with the rest abstaining.

The board calls on Russia to “immediately cease all actions against, and at, the Zaporizhzhia nuclear power plant and any other nuclear facility in Ukraine.”

A growing share of Ukrainians say they are not willing to cede territory to Russia to end its invasion of Ukraine. Eighty-seven per cent ruled out ceding land to Russia, a poll conducted with a sample of 2,000 people by the Kyiv International Institute of Sociology between September 7 and September 13, finds. In July, 84 per cent of Ukrainians said territorial concessions would be unacceptable. Only eight per cent are willing to make the concessions.

The army is here to protect our people and de-occupy our land. But entrepreneurs are the backbones of our society. They are the people who provide us with yeast to back the bread to feed the hungry, and medical professionals, who treat the sick. Not only did they continue their operations during the war, but also took care of their employees, and even managed to launch new funds and international cooperation. All of that while supporting the Ukrainian army. These business owners are the salt of the earth, and Ukrainian soil is one of the most fertile in this regard as well!