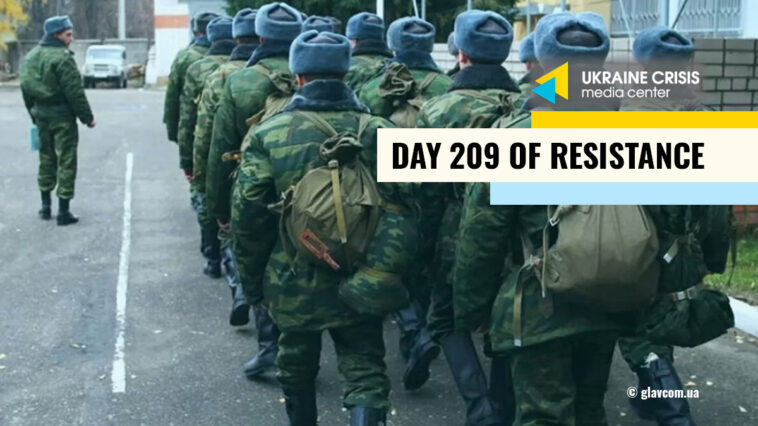 The Russians plan to hold sham referenda in the occupied areas between September 23 and September 27. The intention of the “votes” is obvious – to blackmail and intimidate as Ukraine’s counteroffensive advances.

President of Russia Vladimir Putin is expected to give an address on September 20 after parts of Luhansk, Donetsk, Kherson, and Zaporizhzhia regions held by the Russian troops called for “referenda” on joining Russia, Russia’s RBC said, quoting three sources close to President Putin’s administration. The sources said they did not know what Putin will to say.

A number of Telegram channels said Russia’s Defense Minister Sergei Shoigu would also give an address on September 20.

Russia’s possible mobilization not to catch Ukraine by surprise

On September 20, Russia’s State Duma amended the criminal code introducing chapters on mobilization, martial law and wartime. The Ukrainian intelligence does not rule out that Russia is resorting to propaganda to prepare its citizens for a military mobilization to fight against Ukraine, representative of the Main Intelligence Directorate of Ukraine’s Defense Ministry Major General Vadym Skibitskyi said in an interview with “Kyiv Post”.

“Today, we have begun to collect information – rhetoric about mobilization has dramatically increased in the Russian Federation. [Russian Communist Party leader] Gennady Zyuganov and other Russian political representatives say that yes, there is, in fact, a war and that the Russian army cannot cope. There is a need to declare war and begin mobilization. At the same time, Russian officials say that they will wage war not just with Ukraine but with NATO and the U.S. because they are fighting on the Ukrainian side,” Skibitskyi said.

“There might be support for general mobilization in Russia,” he added.

The Russian leadership has debated mobilization since the onset of the full-scale invasion of Ukraine. After the Russian forces suffered their first losses, especially in the Kyiv and Chernihiv Regions, and in southern Ukraine, they began to draw on different sources to replenish the troops, the representative of Ukraine’s defense intelligence said.

A military mobilization would mark a significant blow to Putin’s regime recognizing that the so-called “special operation” was not successful and a real war is on, Skibitskyi said.

“The announcement of general mobilization would only be a positive thing to us because the protest mood in Russia is weak, but young people do not want to go to war,” he added.

Skibitskyi, citing intelligence’s analysis, said the main people who support Putin’s war are those “who are 50 years old and who will not be going to war.”

“Young people in their twenties and thirties are needed on the front. Because of that, this announcement of general mobilization would be an indicator that will show the readiness of the Russian people to continue this bloody war,” the representative of the defense intelligence said.

Jake Sullivan, the U.S. President’s national security adviser said Russia’s preparation to a military mobilization is reflective of Russia’s struggles in Ukraine as they continue to lose ground on the battlefield.

Unlike its neighboring Mykolaiv region, Ukraine’s central Kirovohrad region has not been subject to Russian occupation or ground fighting. Located in the center of Ukraine, it is sometimes referred to as the heart of Ukraine. These days, its representatives argue that it’s the volunteer heart of the country. Thankful to its eastern neighbors for holding defense, it has been heavily involved in delivering thousands of tonnes of humanitarian aid to the war-torn areas of Ukraine. Kropyvnytskyi, Kirovohrad region’s centre, has accepted 90,000 internally displaced person’s, constituting nearly a quarter of the city’s population. How is the Kirovohrad region, one of Ukraine’s smallest regions, able to do so much to help Ukraine? Ukraine In Flames #194 explores this.