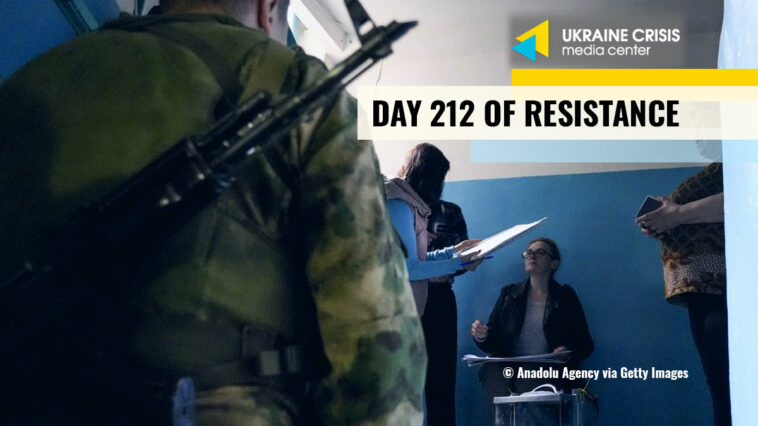 On Friday, September 23, Russia began sham referenda in the occupied areas of Donetsk, Luhansk, Zaporizhzhia, and Kherson regions. Russia will likely use the falsified results of these “votes” to annex illegally annex those areas. The Russian forces do not have full control of either of the regions.

On September 20, Russia-installed “administrations” in the occupied areas of Donetsk, Luhansk, Zaporizhzhia, and Kherson regions called for “referenda” on joining Russia to be held between September 23 and September 27.

In a majority of towns and villages in the occupied areas, Russia banned the residents from leaving to make them participate in the “vote”, the General Staff of the Ukrainian Armed Forces said.

Ukraine’s public broadcaster Suspilne spoke to the residents of Zaporizhzhia region who had arrived in the Ukraine-controlled territory earlier today. They said the Russian troops will not let anyone else leave while the “referendum” is underway.

“Many leave because of the ‘referendum’. Men ages 18 to 35 were sent back. We got a phone call. They asked: will you vote? what is your attitude to the referendum? what will you vote for? They even conducted a survey. A majority will be forced [to vote]. They say, if you’ve received humanitarian aid or pension, you must show up at the referendum,” Yehor, a resident of Vasylivka told Suspilne.

The restrictions also come in the light of preparation to forced mobilization of men of drafting age to the Russian army.

The leaders of the Group of Seven issued a statement saying they will not recognize results of the “vote” and will respond with more sanctions. “We will never recognise these referenda which appear to be a step toward Russian annexation and we will never recognise a purported annexation if it occurs,” the statement reads. “We stand ready to impose further economic costs on Russia,” the G7 leaders said.

“We deplore deliberate Russian escalatory steps, including the partial mobilisation of reservists and irresponsible nuclear rhetoric,” the statement reads.

Ukraine is losing about 50 troops a day, President Zelenskyi says

Ukraine’s casualty toll is five times less than that of Russia, Zelenskyi said in an interview with Ouest-France.

“We have estimates of losses per day, they are not accurate. It is almost 50 people a day. These are not exact numbers, as we don’t know how many soldiers and civilians remain in the territory. Ukrainian military casualties are five times lower than those of Russia,” he said.

Zelenskyi said he receives daily Ukrainian casualty reports. “We need to be very careful with numbers, because we are talking about human lives,” he said.

As of September 23, Russia has lost more than 56,000 soldiers, the General Staff of the Ukrainian Armed Forces said.

On September 23, Ukrainian forensic teams completed exhumation work at a mass burial site near Izyum, Kharkiv region, where a total of 447 bodies have been unearthed, including those of children.

“Exhumation work at a mass burial site in Izyum is completed. The teams worked non-stop for a week. A total of 447 bodies were pulled from the graves, of which 215 are of women, 194 of men, five of children, and 22 of service members. [The crews] also uncovered remains of 11 people whose biological sex it was not possible to identify immediately,” the head of the National Police Ihor Klymenko said in a Facebook post.

A majority of the dead have signs of violent death, and 30 – traces of torture, the head of the Kharkiv regional military administration Oleh Synehubov said. There are bodies with a rope around their neck, tied hands, broken limbs, and burn wounds. Several men had severed genitals.

Security in the Black Sea region: common path for Ukraine,Georgia and Moldova.Ukraine in Flames #197

With 20% of territories lost, millions of refugees and internally displaced citizens, regular shelling, and nuclear threats, all the Ukrainian institutions need to adapt to the new reality and function despite all the risks. While the Armed Forces of Ukraine defend the country’s territorial integrity, international security should also be maintained. Ukraine in Flames #197 highlights different points of view and interpretations regarding the unfolding of the Russian-Ukrainian war and defines new priorities and visions for solving national security issues.