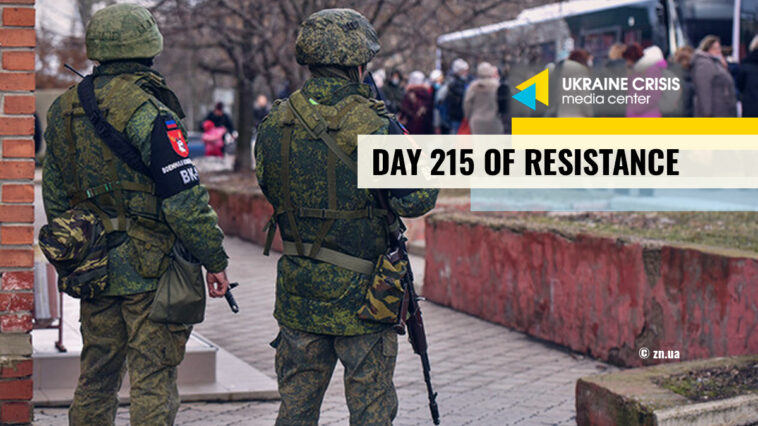 “Russia must be held accountable for its further attempts to change Ukraine’s internationally recognized borders in a violation of the UN Charter,” Nikolenko said.

“An [artillery] strike on a residential neighborhood of Pervomaiskyi at 1.30 p.m. killed seven people, including a 15-year-old,” the Main Department of the State Emergency Service in Kharkiv region said.

The attack damaged private houses. A 20 square meter summer kitchen and a car caught fire. Russia launched an attack on two towns in the Pervomaiskyi and Kypyansk hromadas (communities). They fired multiple launch rocket systems using cluster munitions, and heavy artillery. In Kupyansk, the strike set fire to a church school and a shop, reaching 500 square meters. One person was injured.

Situation at the frontlines

The Ukrainian troops repelled hostile attacks near Spirne, Soledar, Pidhorodne, Bakhmut, Mayorsk, Kamyanka, Pobeda and Pavlivka in Donetsk region in the past day. Ukraine carried out about 20 air strikes against 13 areas where the Russian forces were stationed with their military equipment and armored vehicles. The strikes also hit anti-aircraft missile systems on five sites.

447 bodies have been found in a mass grave in Izyum, a liberated town in Eastern Ukraine’s Kharkiv Region. 30 bodies bear signs of torture. Izyum is another example of Russian war crimes and atrocities. Russia declared partial “mobilization” is now holding fake “referenda” on the occupied territories of Ukraine. Learn more from the weekly digest of our “Explaining Ukraine” podcast. Hosts: Volodymyr Yermolenko, Ukrainian philosopher and journalist, chief editor of UkraineWorld.org, and Tetyana Ogarkova, Ukrainian scholar and journalist, in charge of international outreach at the Ukraine Crisis Media Centre.

Estonia, along with Latvia and Lithuania, has been one of the sturdiest and most reliable allies to Ukraine in the face of the full-scale Russian war. Having provided €245 million worth of defense assistance, Estonia has also welcomed a lot of Ukrainian refugees and made a significant effort to help with the humanitarian crisis caused by the Russian war. Having shared the same history of Russian/Soviet occupation, under which every 5th Estonian was killed, arrested or deported, Estonia is very well familiar with the horrors of Russian rule. Ukraine In Flames #199 explores the steadfast support and solidarity between two countries.