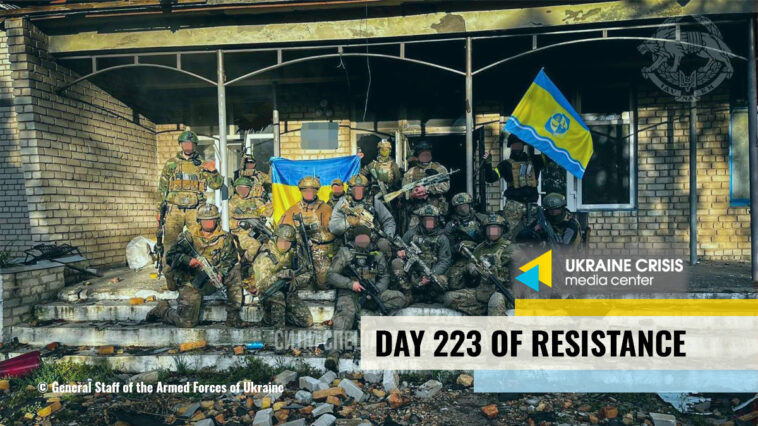 Counteroffensive continues as Ukraine recaptures five towns in one day

On October 4, a number of videos from the newly liberated towns and villages in Kherson region were posted to social media. The Ukrainian troops reportedly recaptured Davydiv Brid, Starosillya, Arkhanhelske, and Velyka Oleksandrivka, reports from an advisor to the mayor of Mariupol Petro Andryushchenko and head of the Office of the President of Ukraine Andriy Yermak say. Maps by military analysts Deep State reflect these gains.

Null and void are also the decisions to implement those decrees.

The territory of Ukraine is integral and indivisible within its internationally recognized borders. Ukraine has sovereignty over all of its territory, the decree says.

The Act of Declaration of Ukraine’s Independence of August 24, 1991 states that the territory of Ukraine is indivisible and uncontested.

President Zelenskyi’s decree underscores Ukraine’s sovereign right to restore and maintain its territorial integrity within its internationally recognized borders entailing state sovereignty, national security, protection of the fundamental rights and freedoms guaranteed by the Constitution and the law of Ukraine.

Ukrainian President Volodymyr Zelenskyi set in motion the decision by the National Security and Defense Council that states impossibility of conducting negotiations with the President of the Russian Federation Vladimir Putin. Ukraine needs to strengthen its defense capabilities, the decision also says.

Ukraine is ready to negotiate with Russia, but with another president of Russia, Zelenskyi said. He had repeatedly asserted that more annexations will make any negotiation with Putin impossible.

When will Ukraine join NATO, and how will its membership benefit the organization? Could Russia really use nuclear weapons in Ukraine, and what does “partial mobilisation” in the former mean for the battlefield in Ukraine? We discuss these and other questions with the former Ukrainian ambassador to the US and Chair of the Ukraine Crisis Media Center Valeriy Chaly in Ukraine In Flames #208.